You know, I don’t take much anything for granted.  I realized, really realize, that I won the lottery when being born here in Kansas, in the United States of America.  I have been so fortunate to be able to travel throughout the world, allowing me to observe how the rest of the humans on it live.  It just reconfirms how lucky I am.

As I age, things are getting a little tougher.  Which is to be expected.  It is a new challenge, which I like challenges, so it’s fine.   Injuries aren’t nearly so good though.  Short term injuries can, and sometimes do, turn into permanent issues.  That is understandable.  I get it, so it is just another part of life.

This head injury I have now is something I didn’t expect.  I’ve been concussed quite a few times in my life.  It is nearly impossible to not have been if you race bicycles as much as me.  I’ve been doing this since I was a young teenager, so, of course, I’m going to have been hurt a fair amount.

I’ve been trying to read up on this TBI issue.  I guess just about anytime you hit your head you suffer some kind of TBI, which is traumatic brain injury.   Like I wrote a few days ago, normally when I whack my head hard enough to knock me out, I break something else that overtakes the head problem as soon as I wake up.  Normally a broken collarbone, shoulder, or any number of other bones.  The concussion becomes nearly nothing as I try to recover from the whole crash.

Not this time.  I wasn’t too worried about it at the hospital.  They told me that they didn’t have to drill a hole in my head to relieve pressure and that it might take a bit, but I would be fine.  I though that meant like I was going to have a bad week or two, then everything was going to fix itself.  I knew nothing.

I’ve been reading up on this whole thing for a bit each day.  What I’ve learned is that there are so many different levels of these TBI’s that it is a wait and see game.  I’ve actually talked to a few guys that have had them and I’m skipping that for a few more weeks.    These things can linger for a long while.  I’m going to wait until I see the doctor at KU med and get some answers to the questions I still have before I take a different tact.

My main problems so far are headaches, which are nearly unbearable, and loss of balance. And of course, lack of close to enough sleep.  These three things make the day kind of a wreck.  I don’t have enough energy to do anything and can’t sleep enough to get the energy so I can. Pretty big quandary.   It has to get better sooner.  Because later is going to be a long time from now. Ouch.

I’m hoping this is all over by the time the election is over.   I know that it all won’t be over completely, but I’m hoping that I can sleep by then.  I’ve listened to enough NPR from all over the world about our election.  I’m done with that.  Let’s just vote and move on to the next stupid thing that no one agrees on.  It ain’t going to get any better this next week.

Okay, time limit is up again.  I probably should read my emails soon.  It is over a 1000 now. Most I’ve read are just well wishes, which is super nice.  Lots from people I haven’t seen in a long time, which is great.  It is the weekend.  NPR on Saturday morning is alright.  It doesn’t start early enough for me, since  Friday night is really the start of my Saturday morning currently. 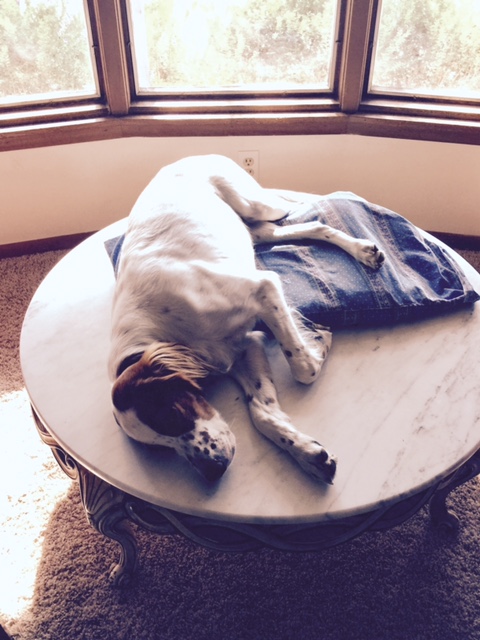 Tucker has been laying on the coffee table in the living room to keep an eye on me and what is going on out front.  Pretty weird spot for a dog.

11 thoughts on “TBI’s are Complicated”