I don’t like rust.  It ruins so much nice stuff.  And once it becomes rust, the stuff is horrible for skin.  Working on a car with rust is not very rewarding.

I don’t like ticks.  I actually hate ticks.  Ticks are my least favorite bugs, by a factor of 10.

I don’t like/nearly hate, people that throw trash out of their cars while driving.  I have no understanding of their thought process.  It is like they want to live in a terrible world.

I don’t like sitting in traffic.  Who does?  Sitting in traffic is a complete waste of time and it would be very difficult for me to live somewhere where there is a high chance I’d be in stopped traffic on a daily basis.

I’m not big with laundromats.  I’m not even sure where that word came from.  I’ve spent a fair amount of time washing clothes in these places and most the people that I run into I don’t want to know personally.

I don’t much like eggplant.  I eat just about everything, but eggplant never took.  That and pea soup.  Add to that canned peas.  Fresh peas are fine, but I don’t run into them that often.

I don’t like hearing gunshots when I’m out riding in the country.  I don’t have any idea when way the gun is pointed, so it spooks me, as it should.

On the gun subject, I’m not big on hunting for sport.  Most of the time, the way I see it, there isn’t much sport in hunting.  It is just killing.

I don’t like dressing up for an appointment.  I try to make it a point to limit things I do that require dressing up.

I don’t like walking downhill.  Especially downhill for a long time.  I like hiking, but dread the downhills.

Overeating should be on this list.  I rarely do it, but when I do, I hate it.

On that subject again, I don’t much like buffets.  I can’t stand looking at how much food the majority of patrons tend to heap on their plates.  It is one of the 7 deadly sins.

Waking up from too long of naps is not good.  I am grouchy and more tired than before the nap.

I hate sticking to my jeans after I’ve crashed.  Jeans and sheets.  I came up with using Saran Wrap, back in the day, now Tegadrem is the ticket.  It still occurs some though.

I don’t like waking to a cloudy day when I expect a sunny one.  It sets a bad tone.

I don’t like skipping breakfast.  I nearly can’t function without breakfast.

Injustices.  Obviously, by definition, they are unfair.  Too many of these occur nowadays.

I’m not big on bad dog breath.  I love dogs though.  Same with people, other than I don’t love people as much as I do dogs.

I could probably keep going all day.  These are just a few. Any of your own? 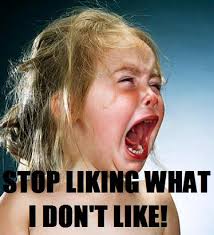