I went over to the Walberg’s and did some measuring of a porch roof that needs to be redone. It is a super cool porch, with a tongue and groove ceiling and skylights, but has an ancient tar and gravel roof that leaks.   And I happen to know how to adhere rubber roofing, so it is a perfect fit.

I put a huge, well maybe not huge compared to warehouses and giant manufacturing plants, but huge for a few bike racers learning how to roof as we go, rubber roof on.  This roof was on a building my grandmother bought back in the early 50’s.  It had continually leaked and should have been replaced a decade earlier.

This was 7 years ago.  I probably wouldn’t have started the project without Michael Fatka just showing up in Topeka ready to work.  He ended up staying there for over a month, helping out immensely.

It took me nearly 60 days straight of 16-20 hours  days to complete.  I am still amazed that I didn’t really run out of steam with so little sleep.  I owe that to bike racing.  I saved somewhere are 80K I figure.  I spent $16000 and half of that was on insulation.

I only rode 3 miles in two months.  The longest I’d ever taken off the bike since I was in high school.  And it worked out fine.  I felt better that February than I had in years.  Weird.

Anyway, it was the biggest single project that I’ve continuously done.  Normally a whole roofing crew would have been involved.  Roofs usually need to be replaced in a hasty fashion.  We got pretty lucky with the weather.

The Walberg’s roof is much smaller.  I learned a ton, so it should go way quicker.  Micheal still needs a new roof too.  I patched that one together last fall and it has been problematic, so it needs to be completely ripped off and replaced.  I didn’t realize how many flat roofs were out there.

There is a certain comradery working together in manual labor brings.  I didn’t realize it so much until after this project.  It is sort of like a bike racing team.  Pretty rewarding.  Okay, here are some pictures of the project.  I had just started writing web posts and had Google ads back then.  All the ads changed from bike related subjects to roofing advertisements.  That was the sign I needed to finish up the job. 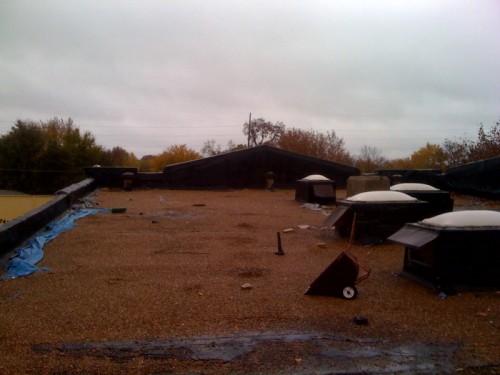 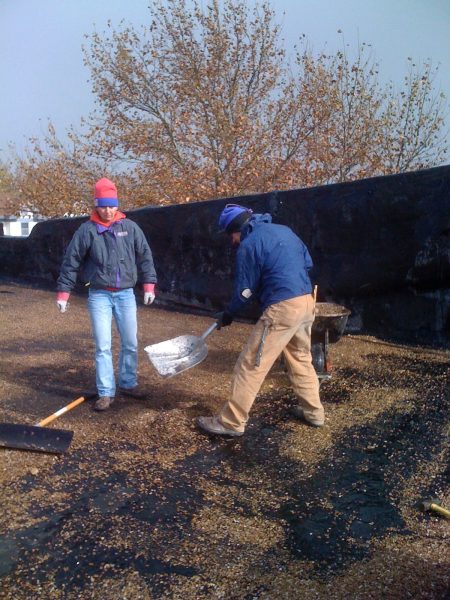 Trudi and Michael removing the rock. 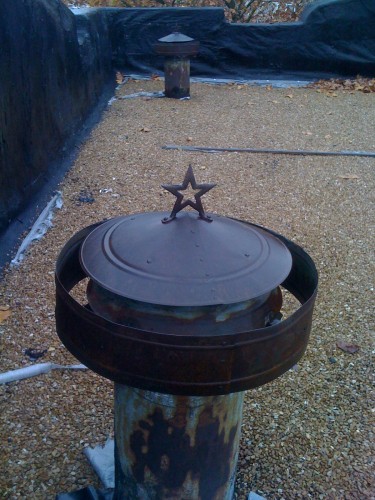 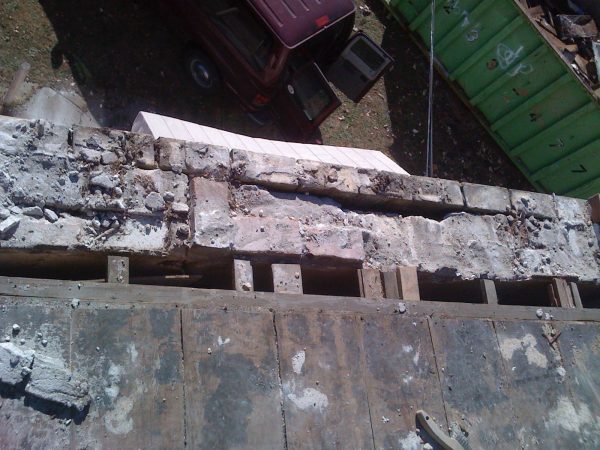 The back of the building was a mess. 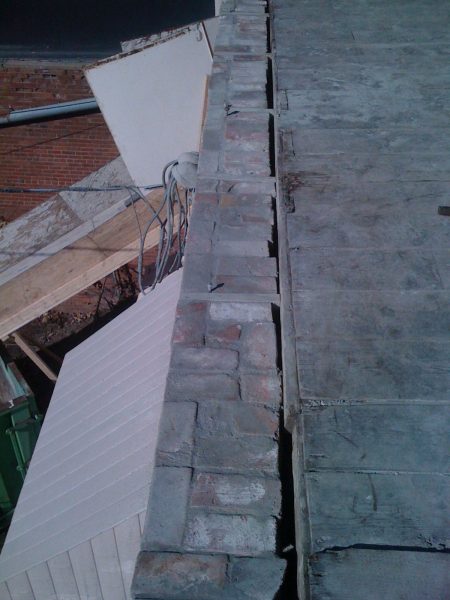 We rebuilt the whole thing. 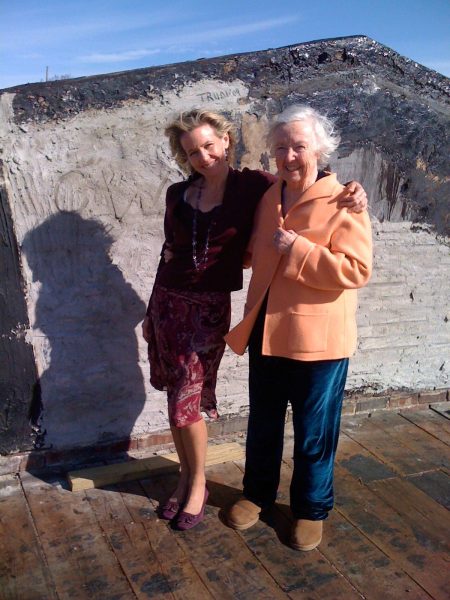 Catherine and her mom came by to visit. She wrote her initials in the concrete. 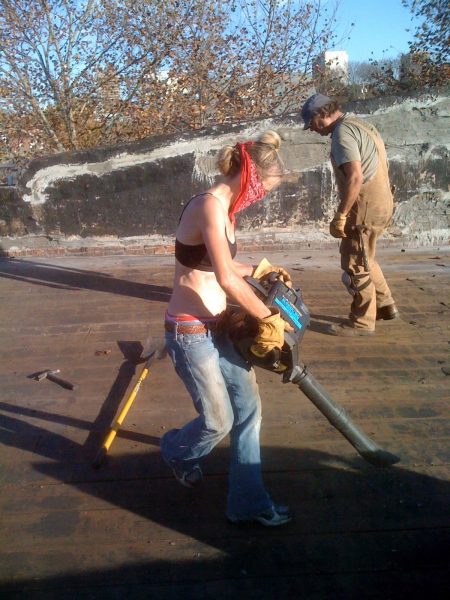 She was also working on the weekends. 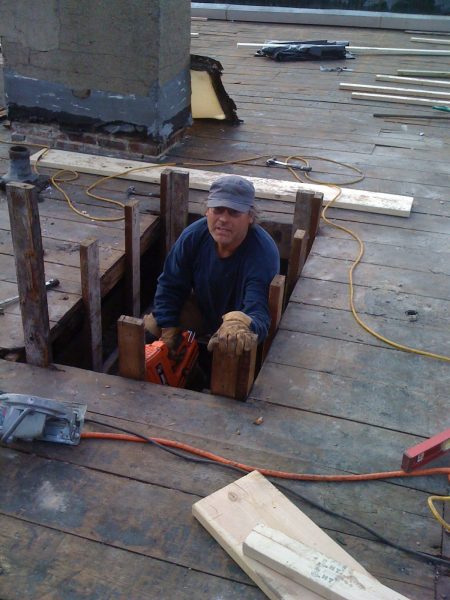 Michael in a skylight. 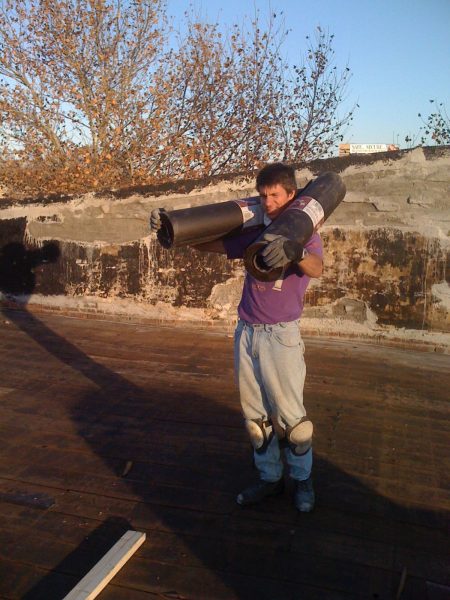 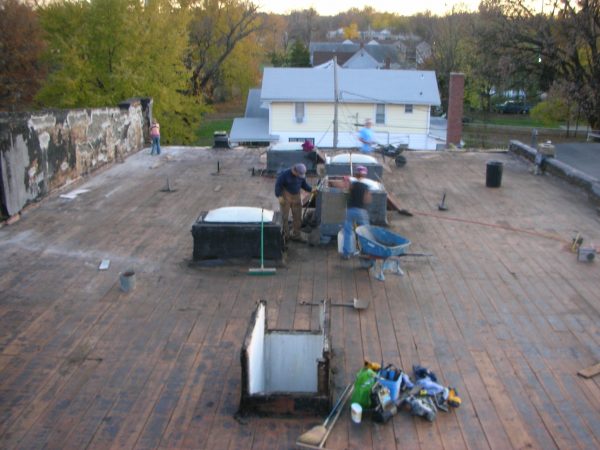 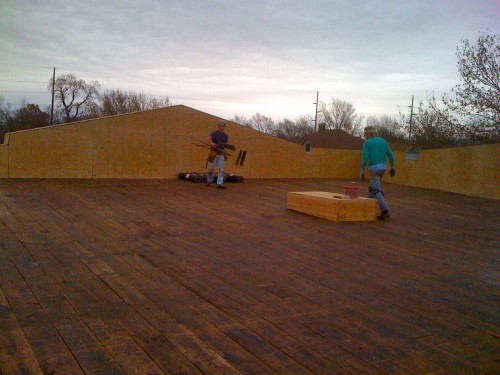 We stripped it down to the sheathing. 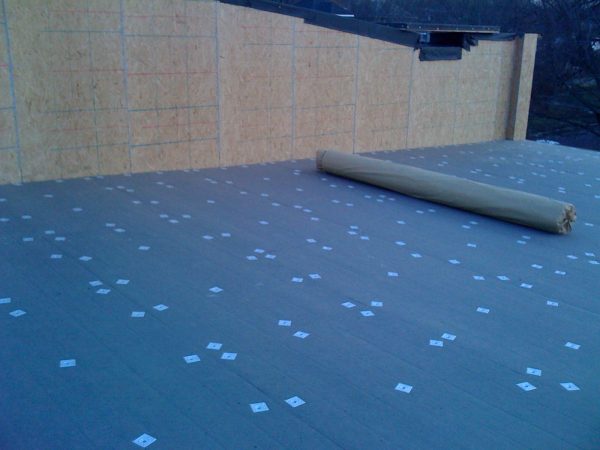 Insulation and a roll of rubber. 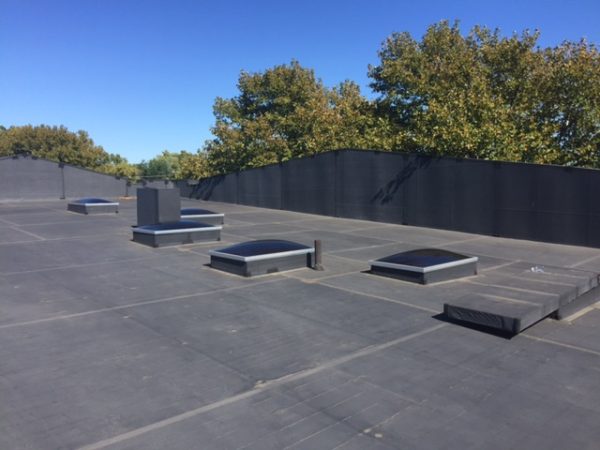 14 thoughts on “Roofing on my Mind”