I’ve been thinking a lot about encounters I’ve personally had with automobiles since my friend was hit and killed by a truck last Sunday.  Luckily to say, I’ve been pretty fortunate in how rarely I’ve had an issue.

I’ve been intentionally hit once, when I was young, accidentally hit in Santa Cruz once, and other than that, I’ve been able to avoid the situation.

But, the encounters are going to continue.  And escalate I assume.  That has to be the case because of the growing numbers of both automobiles and cyclists.

There was a case in LA where a guy intentionally hit is brakes and a couple of cyclists fell and got hurt.  The judge sentenced the guy, a doctor, to 5 years in prison.  I’m not sure about that.

I lived in Boulder for a couple years back in the 90’s.  The situation there was getting pretty intense.  It was nearly impossible to ride up or down a canyon to get to the Peak to Peak without a few people in automobiles going agro.  I realized that they felt frustration.

They were frustrated by not being able to get to where they needed to be on time, because they didn’t allow enough time to drive because of the environment, ie. cyclists.  And the cyclist’s anger kept escalating because of constantly being harassed by drivers of cars.  And it just kept escalating.  The drivers thought it was the same cyclists each day and the cyclists would think it was the same cars, but that wasn’t the case.  It was all cyclists and many different drivers.

I decided just to move.  It wasn’t going to get better.  On the perimeter of the Open Space around Boulder, the small towns were expanding like crazy.  Too many cars and not enough space to ride.

We all tend to have less patience nowadays.  I’m not sure if it is a society issue or what, but people are definitely less tolerate of things.  In general, our society has become pretty unreasonable on many topics.  There is a pretty big line in the sand about whether cyclists should be on the road or not.

Back to the charge to the doctor in LA.  This is not going to be popular with a lot of cyclists, but I think the sentence was incorrect.  The man was an emergency room physician and 60 years old.  5 years in prison could be 25% of his expected life expectancy.  But that isn’t my rational for not agreeing with the sentence.

My thoughts are that there are way, way too many people in jail in our country.  We, as a society, seem to think that jail is the ultimate punishment.  5 years in jail for a 60 year old doctor is a very harsh sentence.  I’m not saying assaulting two bicyclists with an automobile isn’t a serious crime, but there could be other punishments that would serve our society, and the offender better.

Why not sentence the man to 5 years community service in a clinic in Los Angeles?   How about in Chesterfield Square, one of the most dangerous areas of LA?  I’m sure that they could use another emergency room physician there.  And I’m sure that Dr. Christopher Thompson, the guy that slammed his brakes on in front of the two riders, would pretty much hate being there.

It would be a win/win situation.  Punishment for the convicted, but it adds to the society.  It cost somewhere around $50000 per year to keep this guy in jail.  So, if he served his complete sentence, that would be a quarter of a million dollars.   I bet he’d pay 250K to stay out of jail, plus work at the free clinic for 5 years.  That is really a win/win deal.

We need to come up with more solutions than just throwing our citizens in jail.  We, the United States are only 5% of the population, but have 25% of all the people in jail.   We put so, so many people in jail for “crimes” that other countries classify as civil.   We need to become more tolerate and reasonable.

Anyway, I was all over the place here.  Just be careful out there riding.  It ain’t gonna get any safer with cell phones, computers on our dashboards and all the other built in distractions we seem to crave.   Eventually we should put as much effort into addressing these things than just tossing people into jail and throwing away the keys. 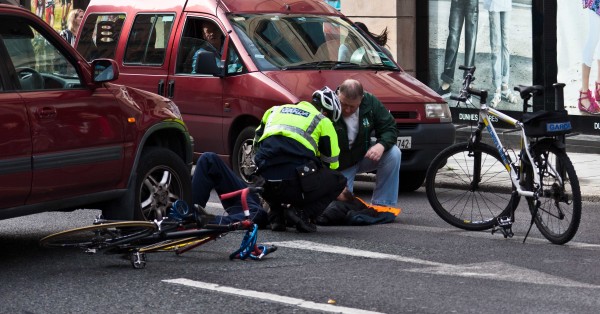 38 thoughts on “Cars vs. Bikes and the Punishment”