I can’t really bring myself to post about much of anything else than that of my feelings of utter sadness about the passing of my friend, Glenda Taylor yesterday.   I’m hoping to try to not even open my computer the rest of the day, as to not be reminded, and acknowledge the realization, that yesterday was real and not just a very bad dream.

I’ve had some pretty incredible experiences the last couple days on my bike, here in Colorado. And they now seem completely trivial compared to the stark reality that Glenda is dead.  I’m having a very hard time controlling my thoughts and not allowing myself to go back to an endless loop of memories of Glenda and questions that can’t be answered.

I’m being pretty selfish in the  thought that I’m relieved that I’m still out in Colorado and don’t have to be at my house tonight for the evening ride in Topeka, where all my friends will be, minus Glenda. I don’t think I have it in me to do that.

There has been tremendous support and praise for an incredible woman.  I am embarrassed that I feel that maybe I took it for granted, knowing someone as special as her.  Here is a link to her Facebook page.  So many people have left such nice comments, somehow trying to get a little personal solace and try to understand the incomprehensible.

This past weekend  was very tragic for cyclists.  I saw at least two other articles about riders being killed in automobile accidents.  Two in Wisconsin, then another one here in Colorado, in Fort Collins.  It seems like is becoming more and more common.  It is something that all of us are facing on a daily basis.  Let’s try not to dwell on this too much.  Glenda wouldn’t want her death to stop others from enjoying their lives, especially their cycling lives.

Cycling to her was like breathing, as was art and many other things.  She was multifaceted.

Okay, I just need to stop.  Death is very personal.   I wish the best to my friends today. 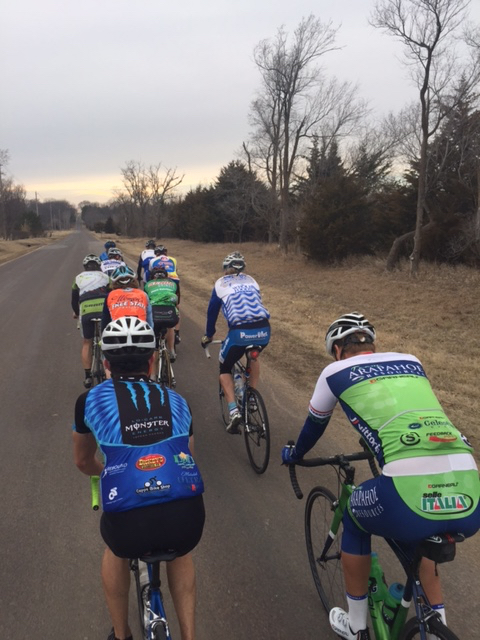 Glenda in orange, in the Freestate jersey, next to my brother.

7 thoughts on “Monday Night Ride, minus 1”