I know I should be writing about bike racing and specifically about Cyclocross Nationals, since I’m down in Austin for just that.  And the racing was great yesterday.  Peter Weber, Brandon Dwight, Paul Bonds, Mark Savery and many others had great races.  But, I want to write about a couple experiences I had the last couple days.

Two days ago, Bill and I were out riding west of Austin out by Bee Caves.  We were doing the loop out Southwest Parkway and then 620 over the dam and back to Austin.  We were on 71, nearly to the light at Bee Caves, riding on the shoulder, when a pickup, dually, comes by, swears over to the white line and guns his engine.  It was diesel and it scared the shit out of me.  \

So he then moves into the center lane and, many lucky or not, gets stopped at a light about 200 meters up.  I decide that I’m going to go and have a talk with him, so I ride up on the passenger side, between cars and go to the passenger side window.  I can see there is a whole family in the truck, like maybe 4 kids, a mom and then the guy driving.  I knock on the window, the guy looks over and I can see he goes off.  He pushes the electronic window button and then I hear the profanity.  He is crazed.  I don’t even get a chance to say a word before I see his front wheels turn to the right and he tries to creep forward to come towards me.

Luckily for me, he was boxed in front and rear, and on the side.  He was screaming shit, right over his family, and I yelled something back, I can’t even remember what.  The weird thing is that, even though the light was still red, a couple cars right behind me honked their horns, which I took as them honking at me, but I could be wrong about that, now that I think about it.

The light turned green and the guy really wanted to turn right to follow us, but was in the middle lane and had to go straight.  Bill kept looking back, thinking the guy was going to come up from behind.  He was sure the guy had a gun, which I don’t doubt.

Anyway, that was the end of it.  Not a good experience, but not my worse bike/automobile experience either.  I have noticed that lots of people, here in Austin, use their horns more than I like.  And most of those I’ve noticed are driving pickups or big SUV’s.

Then flash forward to yesterday.  I went over to the race early, before Vincent’s race at 2:30 and had a couple hours to go ride.  I did a lap with Vincent on the course, got my tires all clogged up with mud and then went  out on the road.

I started out of Zilker Park to the South and turned Southwest on Bee Caves again.  I got just a couple miles up Bee Caves, still in Austin, but between commercial areas, when I see this young black dog running around in the road.  Bee Caves is a really busy road with no shoulder.  The dog is obviously lost and not traffic savvy.  He is on the shoulder, the darts out into traffic and back.  I sprint up and jump off my bike and the dog comes to me.

He has a collar, but it is sort of loose and I’m a little worried he is going to squirm out of it.  So, I drop my bike and get the dog between my legs and kind of hold him there, trying to see if he has tags and a number.

I see he has a tag and a couple phone numbers, but my phone is in my jersey pocket and it is pretty hard keeping ahold of the dog and the cars are all going by at 50 still.  I’m trying to figure out how I am going to get the dog away from the road and back to where he belongs.

Just then a pickup truck pulls up, with his blinkers on stops next to me.  A guy and what seems like a grown son, get out of the truck and the man says he saw the dog running around and turned around to come get it.  He tells his son to put the dog in the back of the truck.  I asked him if he thought the dog would stay in the truck bed and he said that he had a tie down and I looked it and seems like that is how he took his dogs around, it was perfect.

The “kid” put the dog in the back of the truck,  and the man told me he’d make sure the dog got home.  I thanked him and he drove off.  I started riding  again and less than 100 meters later, there was a lady walking back against traffic coming right out me.  There wasn’t really a shoulder and the ditch was rock and steep.  I was thinking why would she be walking out on this road, it was so dangerous.

As I approached her, she waved and stopped me.  I moved off the road and she asked me where was the dog.  I told her that a man in a pickup stopped and took it.  She said she saw me on the side of the road, holding the dog and it looked like I needed help, so she pulled off in a commercial parking lot, maybe 500 meters up and road and was walking back to help me.

That was so nice.  She seems relieved that the dog was okay and I thanked her too for trying to help.

The rest of the ride, I thought about how nice it was that two separate people would stop and help in that situation.  I never expected it and it really helped out a ton.  I would have been in a bit of a bind trying to get that dog back home safely.  It worked out great.  I’m pretty sure that most other places I ride, no one would have stopped.

So, here were two opposite experiences, pretty much in the same city.  One very disappointing and one up lifting.  I guess it is just how people are.  We are fickle.  I’m wondering if the same guy yelling at me might have stopped and helped if I was standing on the side of the road holding a black lab?  You just never know. 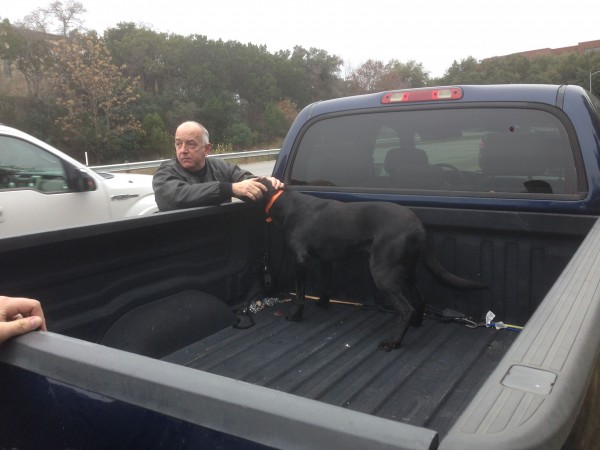 The man helping me out. Notice that the car beside him didn’t even move over at all. Weird that people can be so mean to other people and so nice sometimes too. 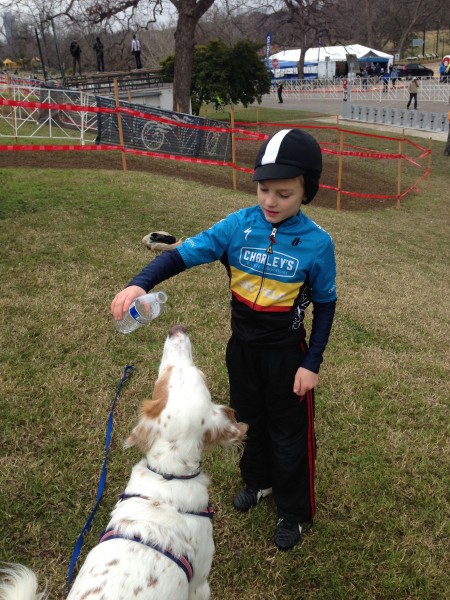 While I was out riding, Bromont was playing at the course with his new friend, Nehemiah, from Enid Oklahoma.

23 thoughts on “Fickle Humans – Renew Some Faith in Mankind”