Okay, back in Topeka. It was a pretty productive weekend last weekend. It was nice getting back into the fray a little. What was really nice was skirting the weather that was pounding Iowa the whole time. Other than racing in the rain on Sunday in Muscatine, the rest of the weekend was dry for the Pro 1/2 races.

Monday’s race in Rock Island was pretty uneventful. The course is a flat, .8 mile course that is a figure 8. It was just a tad wet during our race. Normally the race is very animated, but it was very windy, swirling through the buildings, so that made it hard for a break to get established.

I had no intention of doing anything but follow wheels. That is where I’m at now. That made the race moderately boring for me. A few moves went up the road, but nothing serious. So, to the end.

Texas Roadhouse had a ton of guys in the race. Plus they had the two fastest riders with Colton Barrett and Adam Leibovitz. So with about 5 laps to go they started getting organized at the front. There was a lot of shuffling behind them because they didn’t really start any super quick pace. I hate it when it’s like that. It is so much better for everyone when the team that takes control makes the speed hard enough that the field is stretched out in a line. But, it never got that way until about a half a lap to go.

I was floating about 10-15 guys back the whole time. It was fairly easy staying there. But I made a bad decision, which I’d probably make again if I were in the exact same circumstance. I decided to stay too far back on Cole House, who was following Paul Martin and a Panther team mate.

Cole had gone for the points sprints earlier in the day and he made an incredible move on the last one, coming from 150 meters back and nearly won. He has ridden this race a ton of times and knows the timing of the sprint as well as anyone. Anyway, the setup is that you have to be in position with 3 corners to go. But I wasn’t. I was 10 back sitting on Cole and Texas Roadhouse was going super fast on the front.

I thought that Cole would jump from the corner. Or Paul Martin or Chad Hartley ahead of him would go. But nothing materialized. My jump is pitiful right now and I had no business being in the wind for even a couple seconds. So all I could do was follow, but everyone to follow was just staying in line. So I went around the second to last corner in 11th and lost motivation. A couple guys came through on my inside on the last corner and I ended up 13th. It didn’t matter.

Like I posted yesterday, Adam Leibovitz won the last three days in the Quad Cities. He has pretty incredible form right now. He needs to go to another level and try he talents in some bigger races. We’ll see how he fares down in Tulsa in a couple weeks. Those races are at another level.

Sunday we were watching the Women’s Road Nationals on the Internet. The race was pretty animated. My friend, Amanda Miller made the select front group, so I felt obligated to watch the last hour. I had been planning on riding in the morning. Anyway, Mara Abbott bridged up to the front group on the climb and then went right by them. I’m not sure if she would of won the race, probably not solo at least, but she definitely lost the race when she flatted and had a horrible wheel change.

The wheel change was horrible on so many levels. I think that the blame for her rear derailleur not being attached to her bike after was probably 50% hers and 50% the motorcyle mechanics. Let’s start with her just standing there, straddling her bicycle, looking forward. What’s up with that? When you have a flat tire, someone else is going to be changing it, especially with a rear flat, you need to not be on the bicycle. Whoever is changing the wheel is going to need to pick the bike up off the ground to remove the rear wheel, normally in a race situation by hitting the wheel pretty hard on top. I’m not sure Mara even shifted into a small cog in back.

Anyway, that was mistake #1. Mistake #2 was the mechanic just dropping her bike on the ground, rear derailleur first when he went to get the wheel to put in. He had no idea what he was doing at that point. That is what broke the hanger, the fall from 12 inches to the ground. Mistake #3 was he didn’t know what cog the chain was on when he took the wheel off, so he couldn’t get the wheel back into the frame. He pulled the derailleur back a couple times, just enough to snap off the hanger.

In this article at Cyclingnew.com, Mara says – “I’ve raced for a while, and I’ve had a lot of success. That’s the first time something like that has happened to me where I’ve had luck play into it,” said Abbott about her bittersweet day. “Hopefully this will set me up to have future luck and not dwell on it.”

There was no luck occurring here. She rode into a manhole cover, on her own, flatted, and then had no idea to to act properly to get an fast, efficient wheel change. I guess I have to take the original sentence back, because she did have very bad luck getting “Mr. I don’t know how to change a wheel motorcycle mechanic” as a first responder. It never should have happened, especially at the US National Championships.

How about the Tour of Summerville results. Anyone getting sick of that other than me? Not sure how it all went down, but I’m sure it was just the same as usual. Kind of strange because Sommerville has such a wide open, long finish.

Bromont has to to to K-State in a few minutes for his surgery tomorrow. It is a fairly complicated surgery, so we’re a little stressed. He is such an emotional guy, he’s not going to like being over at the vet hospital for a few days. We’ll go visit. I’m sure it will be alright. 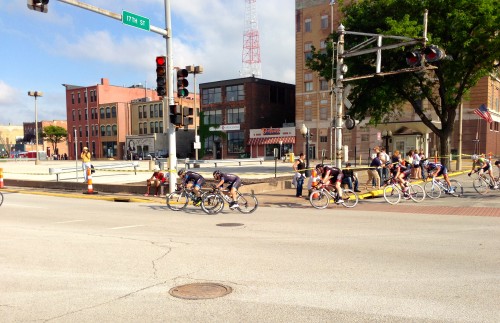 This is the 2nd to last corner at Rock Island. I’m all the way to the right, behind Cole House, two Panther guys, plus Rob White and Chad Hartley. It seemed like a good spot to be in 400 meters earlier. 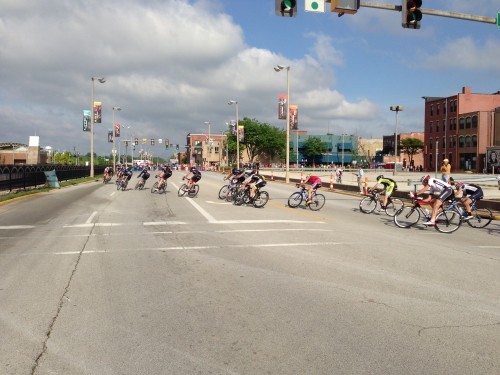 This is coming out of the corner. Adam and Colton are nearly into the last corner we’re so far behind. 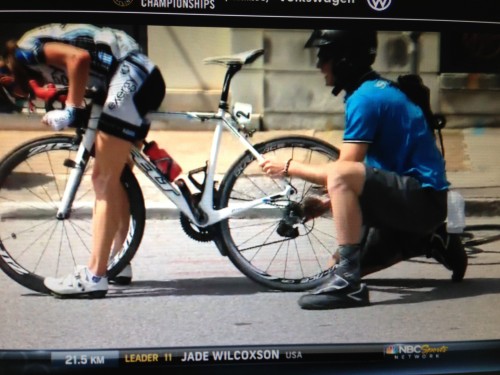 The guy is still trying to put the wheel in with the derailleur in his hand. 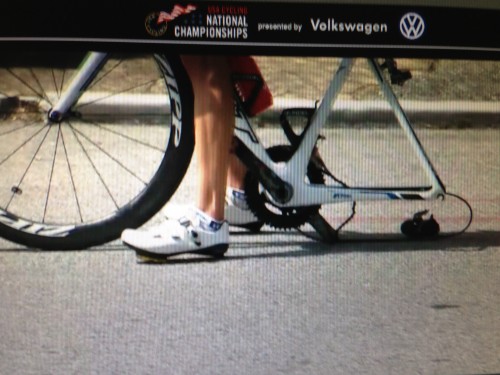 This was a good picture. Guess she was still waiting for the wheel. 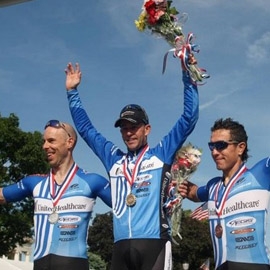 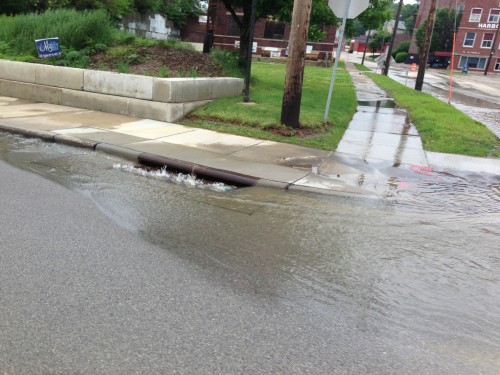 It rained a ton over the weekend. Davenport was flooding everywhere as I rode to the start of the race. 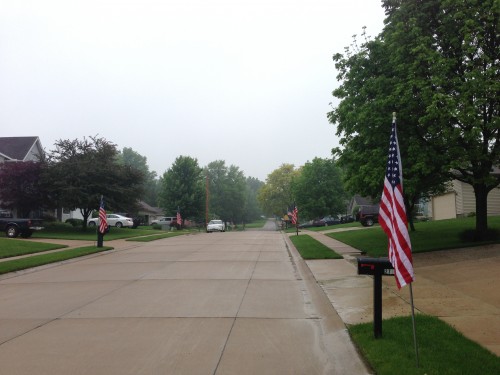 I love the Midwest. This is Jeff Bradley’s neighborhood. Full size American flags at every driveway on Memorial Day. 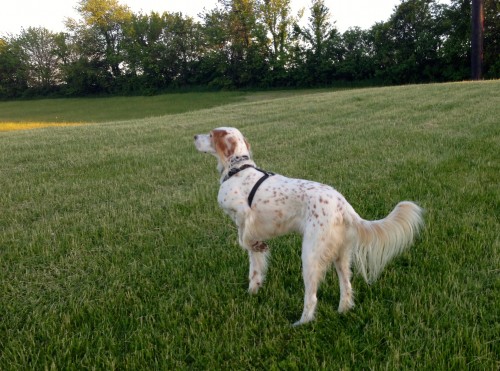 13 thoughts on “Rock Island Recap and Other Misc Stuff”