Since there are some people out there that are thinking today is the last day of Earth, then this would be my last blog post. I’m not going with it and I think that most Mayan’s aren’t thinking that way either.

It is the winter solstice today, so winter is officially here. I shoveled snow for the first time of the year yesterday, so I guess that was appropriate. I think my lower back forgot how heavy these early snows can be.

I hope it isn’t the last day of the Earth because if it is, that means that I rode an ergometer inside the last time I did anything that resembled riding a bicycle. I hate riding inside, so that is a depressing thought. That being said, I did do alright on the ergometer. Normally, the time ticks by super slowly when I’m riding inside. After 15 minutes it seems like an hour. Yesterday, I rented the new movie Total Recall, and then got on the ergometer. I rode around 280 watts for exactly an hour and it went by pretty quickly. I hate sweating that much. My ears clog up with water if I ride much more.

I got a late call from Brian and had to head over to Lawrence, once again, for some team photos. It was pretty quick, but we stayed and ate dinner afterward.

I spend some of the afternoon doing some drywall work at Adam’s. We’re gonna start laying tile this morning. It might take a little longer than normal because we’re heating the floor and it makes it a little tricky to get the thinset uniform height when you trowel over the electric mat. But, it’s not all that big of a bathroom and the shower should go pretty quickly.

The roads were crazy slick yesterday. Solid ice early and then again after the sun set. Lots and lots of fender benders. Guess that is what happens with the first snow storm of the season. It was very slippy (British fro slippery) though.

I’m going to try to get out and ride outside today if we get done early enough. It is supposed to be nearly 40, so the roads will probably clear by mid afternoon. Especially the ones outside of town that were plowed good yesterday. If not, I guess I can ride once more inside. Or maybe it will all be over sometime today and I’m done with riding. It’s all good no matter what happens. 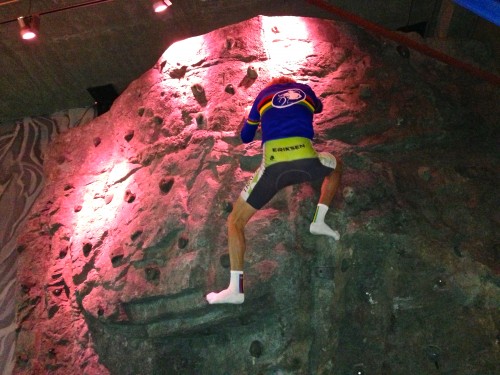 After the team photos, we messed around on the climbing wall some. I just wanted to see if my should would fall off or not. 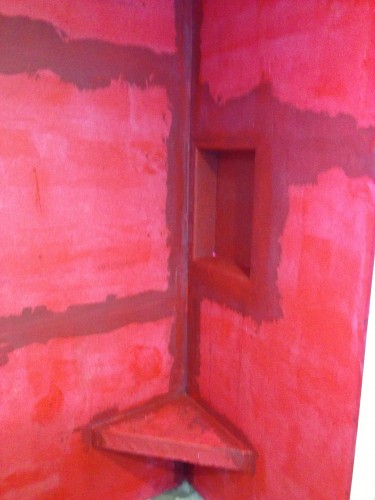 Adam covered the shower area with this sealing stuff. This thing is never, ever going to leak.