Okay, I pinned my number on the National’s Jersey that I got last week in Madison. This is only the 2nd I’ve ever worn a Master’s National Championship jersey other than when they’ve given them to me at the awards podium. (In Providence one year, they had a revenge race on Sunday after the Elite race and lined up all the National Champions up on the first row.) But, it is the Master’s Worlds and it is here in the US, so I think it’s appropriate and probably the right thing to do.

I’m heading over to the course before 9am to ride a lap and see if they’ve remarked it again. As of this moment, I really don’t have any idea what course I”m racing in 3 hours. I assume it is going to be the same course that the 30+ guys raced at 1 yesterday, but I really don’t know. It got down to under 20 again last night, so it’s definitely going to be frozen at 11am. At least I think it will be. The worst case scenario would be if the sun came out and melted the top of the ruts and put some slime on top of frozen mud.

I think I’m good on the course however they decide to run it. I would have rather had it like it was during the qualifying races (a muddy slogfest) because that took a ton of power and it was way more predictable. Unpredictable race courses sometimes produce unpredictable results. But, it is what it is. And it is cold and frozen as of now. Better get out there for a little while. 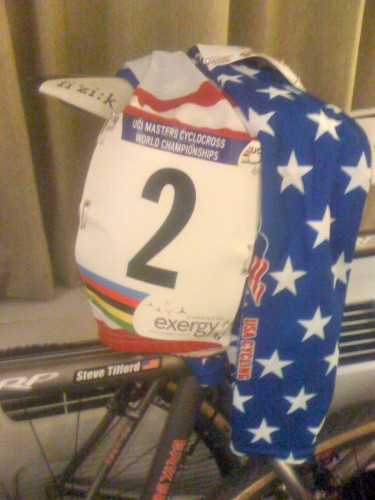