It seems like cyclocross comes to mind earlier and earlier every year. Something like the Christmas season starting at Thanksgiving and now after Halloween. I think the end of the Tour is when people start getting the itch for ‘cross. At least the anticipation of the cross season. I never have, but since this season has been so disjointed for me, I need to get my mind on something. Not to mention, I still have a bad taste in my mouth from last January.

This season is going to be really long. With Cyclocross Nationals moved to January in Madison. And then Master’s Cyclocross Worlds being held in Louiville a week later, it makes the season incredibly long. That is one reason that I’m not so worried about taking a little break from racing in the heat of July, you don’t have to be going fast for cross for nearly 6 months.

I’m taking some tread over to Europe to get some tires made for the cross season by FMB. I’m sick of Dugast bullshit tires. Challenge has some new tires on the market this year. The Limus 33 tubular cross tires look to be pretty good. Aggressive tread that is deep. It’ll be interesting testing them out. I really hope the work out as well as the look.

I flew out to California yesterday to do a few things. I’m going to the gym some this week. I felt pretty great riding in Colorado, considering the altitude, but my left leg/hamstring has some issues. I need to address them before I get into a serious cross training routine. I’m going to Salt Lake City to see the BMC physicians, Max Testa and Eric Heiden after the Tour of Utah is over. Hopefully I’ll be a little more balanced, muscle wise, before I get there.

So, start thinking cross. Just a little. If you’re really jonesing for ‘cross and think you’re fit, you can go out to Washington State, this Thursday and ride Midsummer’s Night Cyclocross. Check out the prizes. 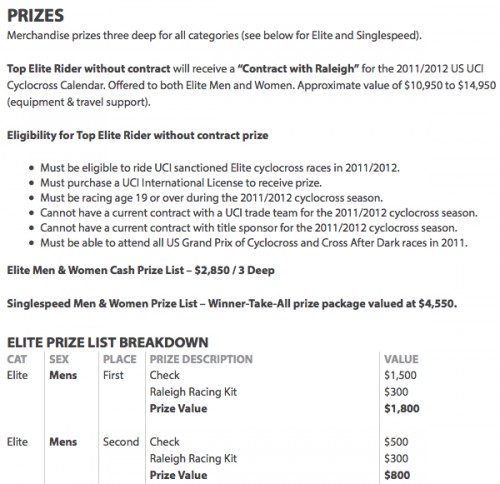 Probably a little too spur of the moment for most of you. I understand. I don’t even have a cyclocross bike together yet.

If you’re thinking about honing some ‘cross skills, J-Pow is doing a cyclocross clinic in Colorado in August. Also, Adam Myerson is having one on the East coast a couple weeks later.

It is going to be interesting to see how this new line up situation works for the Nationals. Some kind of National Ranking system, using “an innovative algorithm” that the USAC has come up with. I’m going to hold off on commenting fully on this until I get a little more information, but I’m dubious that this has even the slightest chance of working correctly. We can contrast that with the call-up order of Master’s Worlds, which is totally random, unless there are 75 participates in the race. Man, the powers at be need to get their shit together and put as much effort into governing the sport as we do training and competing in it. 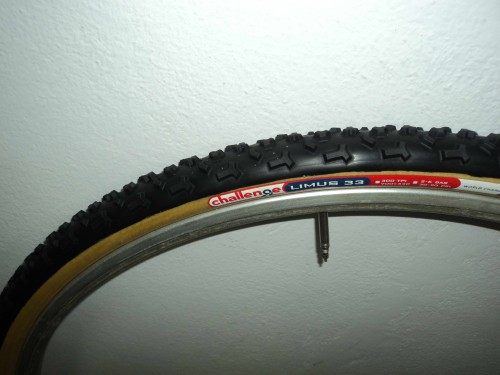 This is a photo of the new Challenge Limus 33mm tubular.