I am back in Wisconsin already. Kind of a in and out trip. The BMC Team was racing The Tour of Poland that starts tomorrow and it was a 1600 km drive from Belgium for Trudi and the BMC gang, so they took off on Thursday. I took a train from Izegem to Brussels. It was a hour and a half train trip and it cost 9 Euros. That is pretty cheap. And no one ever looked at my ticket. I never even saw anyone that did that. Kind of strange in a nice way.

I like riding on trains a lot. I plan to do that much more later in life. Going through Brussels on the way to the airport I realized that I should have planned on staying a couple extra days to look around. I’ve been there a few times before, but not recently. It is a very nice town to walk around.

Upon arriving at the airport, the airline guy said they were giving $1000 and a night at the Sheraton Brussels to volunteer to fly the next day. I signed up immediately. I was the first volunteer out of 250+ people that had checked in. I thought to myself it is pretty nice not “having” to be anywhere at any specific time. I never forget how lucky I am. And I was really looking forward to checking out Brussels again. But, at the gate it became obvious that there were a lot of passengers that weren’t there, so I knew that I wasn’t going to get bumped. I went to get my boarding pass back and the agent had moved me up to Business Class for being the only volunteer. Sweet.

I hadn’t flown Business Class in a while. Not since the seats went totally flat. It is amazing how much better you feel after 9 hours of flying. I was seating next to a huge guy. Pretty young. Black. Dressed really nice. I thought maybe a football player. He was traveling with a friend that had the same build. I introduced myself, but we didn’t talk much. I asked him what he did and he said that he was “currently unemployed”. I told him hopefully he could stay that way. He didn’t eat any of the airplane food and only drank water. He was reading weight lifting magazines and listening to music. He pulled out a new Macbook and started watching a movie. It was the Alfred Hitchcock movie, Rear Window, with Jimmy Steward and Grace Kelley. It surprised me. After the movie he started listening to music on his headphones. I could here it and it was Bach’s Fugue in G Minor (the guy in the link is crazy good. Check out his feet).

Anyway, my point is that I was surprised by nearly everything this guy did. I talked to him a bit while deplaning. He was definitely someone I could hang out with. I need to be more open before stereotyping people.

Okay. I need to get going. There is a 50 miler road race starting soon. (Dennis is riding the team time trial with 3 guys I know.) If I felt better, I’d probably to it. It’s called the Firehouse 50 and something like 800 riders go off all at once. I raced it once and won. My ribs are pretty jacked up still. I need to go see another doctor, but am procrastinating. I ran for 20 minutes last night in the woods “with” Bromont. I am super sore this morning. Legs and ribs. Not a good sign for cross. My guys, Tradewind Energy Team is racing in Elk Grove this weekend. I hate missing another race, but it’s not possible right now. I thought this rib thing was going to be short lived, but it doesn’t seem to be improving much at all. And Frank Schleck broke his collar bone into 3 pieces and was racing a kermese this week. Go figure. 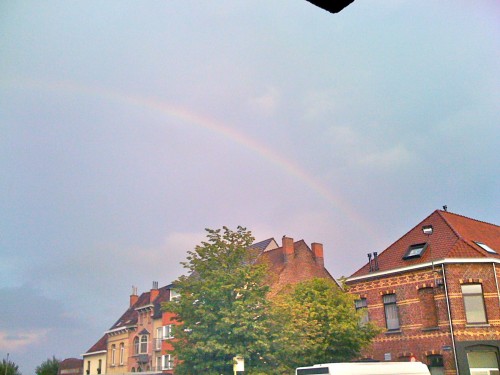 I seem to be experiencing a ton a rainbows recently. This was a full rainbow at the train station outside Izegem. I knew it was going to be a good day. 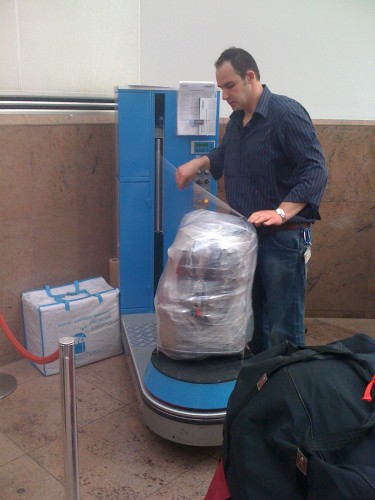 This is the trend in Europe. Plastic wrapping your luggage before you fly. It wouldn't work in the US with all the security. 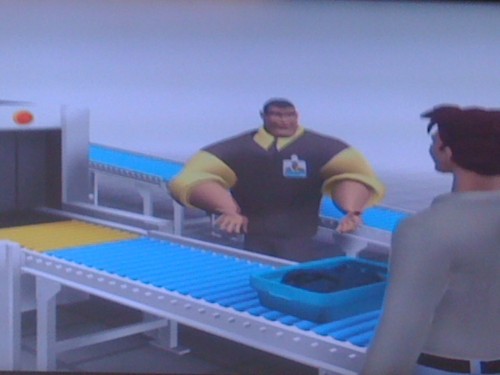 This is a photo of the video they show as you enter the securtiy area in Brussels. Check out the size of the agent guy. 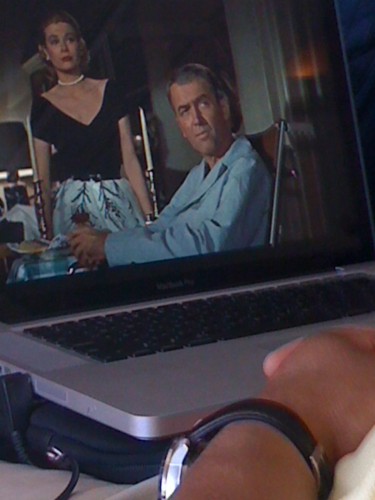 Clandestine photo of the of the Rear Window video.

5 thoughts on “Back in Wisconsin”