Today was the final World Cup cyclocross.  Now there is only the World Championships next week.  Funny how sometimes the season feels so long, then the next time it seems to fly by. Probably not the case for the guys training through the end of January for the Worlds next week.

The races today were interesting.  Marianne Vos is killing it and is going to win next week, unless something catastrophic happens.   She looks like she should be racing the men’s races, she is that good right now.

The men’s race is going to be different.  Today, at the World Cup in Hoogerheide,  it was a tactical race.  A team, tactical race.  There was a huge group at the front and no one wanted to risk it.  Eventually Lars Van der Haar attacked and his team mates went to the front and slowed the remaining field.  I’m not sure I’ve seen that so much in cross racing recently.

It worked amazingly.  Van der Haar got so far ahead that he was completely uncatchable.  And his Telenet Fidea Lions team mates rounded out the podium with Meeusen and Van Kessel finishing 2nd and 3rd respectively.

Mathieu Van der Poel didn’t have a good day, finishing in the mid 20’s.  And Wout didn’t even show up.  He had already won the World Cup overall, so he must be concentrating on the Worlds next week.

So, the Worlds for men is more open.  If I was betting, I’d have to pick Wout.  He took a weekend off and won last weekend.  And Mathieu seemed a little sluggish today.  But you never know.

Did you see the article about the Belgian junior cyclocross coach that killed himself after one of his riders was positive for cortisone?   At least the guy had a conscience.  Maybe too big of one, but he did take responsibility, I guess.

Anyway, the weather in Kansas was nice yesterday.  I rode nearly 55 miles, which is about my limit right now.  It was in the 50’s and not so windy, which is unusual.  Today it is supposed to be 10 degrees cooler and windier.  I’m a little tweaked from yesterday, but want to go ride with my friends, so I’m in.  It is hard to pass on warm weekend days in January. 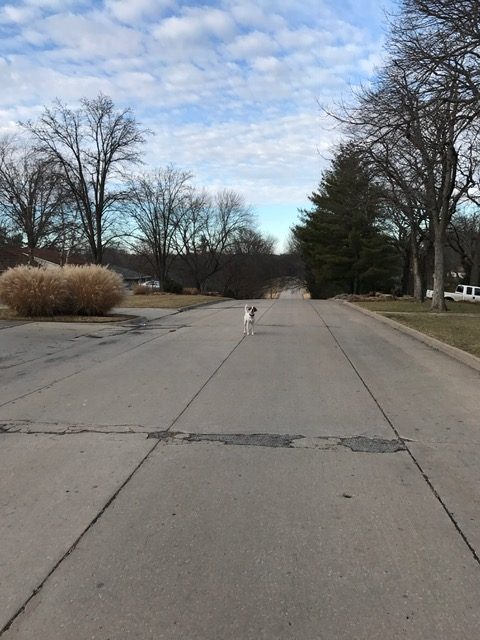 Tucker being a bad dog and waiting for me in the middle of the street on his after ride romp. He is probably wondering why I’m so slow. In reality, he is gotten way stronger and faster. I can’t hardly keep up.