HI guys.  I’m on such a different level that I’m fluctuating all over the place on an hourly basis, so I’m anywhere from sort of normal, which is a very short thing, to completely jacked, thus I can barely open my eyes and my head is throbbing like the worst headache I’ve ever had in my life.

It is so weird because I’ve crashed and hit my head on the ground quite a few times in my career.  Usually when this happens, I break my collarbone, shoulder, ribs, or something else that overrides the head issue.

This time all I have going against me is my skull being fractured.  Honestly, I actually haven’t seen a real image of how bad a fracture I have, but it is pretty bad.  At least the way my head feels, it is pretty bad.  Both my ears are pretty clogged because they are backed up with blood on the inside.  Thus, I am not hearing very well at any time.

I’m maybe sleeping around 4 hours a day now.  Usually at night I sleep around 2 hours before I wake with a crazy headache.  Then during the rest of the day, I sleep an hour or so a couple more times.

The only way I can sleep is when I take a Perocet an hour before I go to bed.  Perocet along with some ibuprofen give me a couple hours relief.  As soon as that wears off, then it is impossible to sleep anymore.  So, I listen to NPR and just lay around with a cat or Tucker, depending on what time of the day or night it is.

I don’t have another doctors appointment until next Wednesday.  I’m seeing the neurosurgeon on Wednesday morning, then going to an eye doctor to try to figure out why I’m not seeing very well out of my right eye as of yet.  I assume when the head swelling goes down, then the hearing and vision problems won’t be around, but that maybe an all wrong thought, I’m not sure.

I’m losing weight too.  Like crazy.  I think I’m already to about the lightest weight I’ve been the last 3 years and it is just falling a pound a day or so.  I guess I haven’t been eating that much, but can’t really get that under control as of yet.  I’m not exercising at all, which is officially against doctor’s orders.  Even if it wasn’t, I woudn’t be doing it.  My head is so sore that it doesn’t even cross my mind to exercise at all.

The neurosurgeon told me I couldn’t ride for 4 weeks, but he really meant 8.  It will be two weeks by Friday.  It hasn’t gotten any better, so maybe 4 weeks is going to be way too short.  My balance and head are so off that riding a bicycle wouldn’t be the best idea yet.

Yesterday I got a FedEx package from the guys at Strava.  I don’t really know those guys, but am really into going there sometime to check them out.  They sent a super nice t-shirt, plus a Strava jersey that is signed by all the guys at the Strava office, wishing me a quick recovery.  Pretty nice surprise.

Tucker has been super clingy.  He is pretty much following me anywhere I happen to be at.  He sleeps at my feet or my lap pretty much 24/7.  I would love to take him out to the country to let him run loose, but I don’t have that ability right now.  I plan on turning the corner on this stupid head pain soon, so walking in the country will be easy and a daily basis.  RIght now, it isn’t happening.

Okay, I made it until 1 am this morning, now have been awake and it’s approaching 5 am. Listening to the BBC is alright now.  They are sort of skipping the political stuff with Trump and Hillary, so the BBC is okay listening.   The next two weeks is still going to be way too slow for me. It has been raining  the last couple hours, with lots of lightening happening.  It makes the night more interesting.  I took another oxycodone, so I might be able to sleep a couple more hours soon.  Or not, it really doesn’t matter. 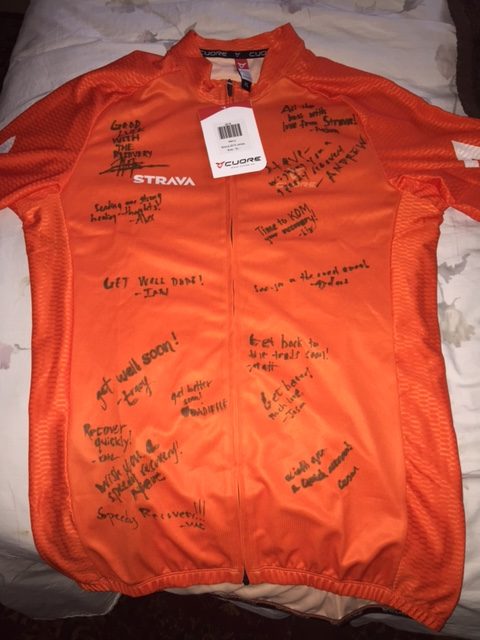 Strava jersey that showed up yesterday.