On the post I did a couple days ago, on list of things I don’t like, I was pondering about including taking buses.  I couldn’t do it.  I don’t mind buses.  Actually, I sort of like taking buses. I like watching the world go by at a car’s speed, being a little higher than a normal automobile.   I say that, but I haven’t done it since I could afford not to.

I think the last time I took a bus was way, way back when I was staying semi-permanently at the Olympic Training Center in Colorado Springs.  I didn’t have a car and mass transportation was the only way I could get around alone.

I was going back, from Topeka to Colorado Springs.  The bus left Topeka pretty late in the evening, to WIchita, where I changed buses, then to  Pueblo and Colorado Springs, through Southwestern Kansas and Southeastern Colorado.

There were a bunch of Harley motorcycle guys, minus motorcycles, waiting in Wichita for the Colorado Springs bus.  They were trying to pick up a girl, who was receptive, so there was a lot of beer drinking going on.

We all loaded on the bus, I had my own row,  At the very last minute, a couple police officers brought this guy to the bus.  He was handcuffed and talked to himself.  They took the handcuffs off and loaded him on the bus.

My luck, the guy walks down the aisle and sits right behind me.  And then he proceeds to talk to himself constantly.

I was trying to sleep, but was pretty interested in his personal conversation.  He was saying crazy shit over and over again.

We’d been moving a few hours, so it was really late, the middle of the night, maybe around 2 or 3 am, when the guy started saying he was going to “do it” over and over.  I was sort of asleep, but he grabbed my seat to stand up and woke me.

He stood up and started walking towards the front of the bus, saying “do it”.   I was wondering where he was going since the bathroom was at the back.  He walked straight up to the front and, with no hesitation, jumped on the driver’s back.  I couldn’t believe it.

I don’t think bus drivers had to wear seat belts back then because they both fell to the floor, in the stairwell by the door.  I couldn’t really see it, but after it was over, I learned the guy that was sitting behind the driver reached over and grabbed the steering wheel.  The bus slowly slowed to a stop.

The Harley guys were at the back of the bus, having their way with their new friend, but when this all started, they were on it.  Right when the bus stopped, a couple of them were nearly to the front.  Somehow the door opened and everything was outside.  They had this guy, I couldn’t see it, but I could hear and feel it as they proceeded to smash the guy’s face into the side of the bus.

Pretty soon we were all outside, in the middle of nowhere, Eastern Colorado.  It was so dark. Everyone started smoking, including the bus driver, who seems more like one of the Harley guys now, even though he was wearing his bus driver outfit.

I used the time to wander off and pee.  I couldn’t believe how many stars were in the sky.  I could hear someone smash the guys head against the side of the bus every once in a while.  He wasn’t very docile, even though his face was hamburger.

The bus driver used his radio and called ahead to the next town.  When we got to this small town, there were some sheriffs waiting for us.  Like I said, all this didn’t slow the crazy guy down much, he was mad.

They handcuffed him again and were talking to him, when all of a sudden, he takes off running down the main street, which was abandoned.  One of the sheriffs sort of laughs and takes off jogging after the guy, who wasn’t really running, more like stumbling.

The sheriff pulled out his billy club and when he gets behind the guy, he wacked him across the back of his head.  That was it, he was out.  He was laying flat on his face, in the middle of Main St.  The sheriff just casually walked back to get his car.  The crazy guy wasn’t moving.

We all got back into the bus, and drove past the unconscious guy in the street,headed to Pueblo.

This really didn’t sour me to riding buses, I just moved up the economic ladder a tad, so avoided them.  I still took an occasional train, but I think that was my last cross-country bus trip. 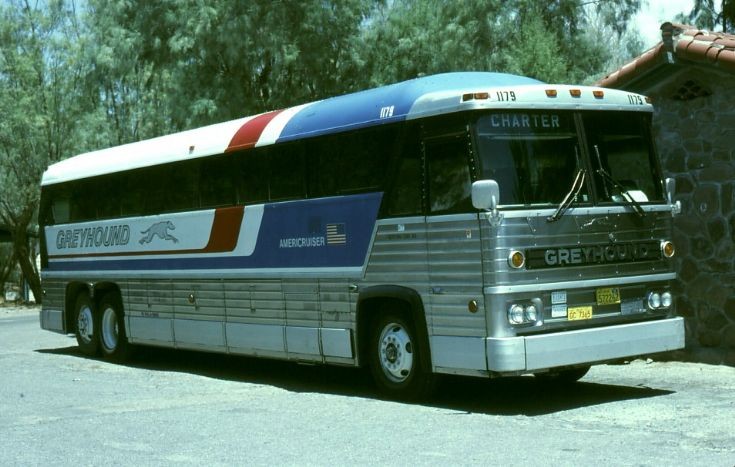 This is what a bus looked like back then.