I was driving out to Colorado yesterday and had a blowout in the front tire in my diesel van.  It was pretty scary.

Let me go back to the beginning.  On Tuesday, I had finished putting the window back in the van and noticed that the left front tire was a little low in pressure.  I put on a pressure gage and it was at 30psi, which is about 25psi low.  I got out a floor jack and jacked it up and looked at the tire to see if there was anything sticking in it or I could see where it might be leaking.  I didn’t find anything.  I filled it back up and drove it.

Then Wednesday, before the ride, I took the pressure and it was low again.  I didn’t have time to get it patched, so I thought I’d try Fix-a-Flat.  I had a can in my garage for some reason.  I’d never really used it in a car tire, but couldn’t see why it would be any different than using latex in a MTB or road tire.  So I put the can in, took the van out for a couple mile drive and then got back in time to ride.

A couple hours later, I was driving in Western Kansas and it seemed like the tires were making a bunch of road noise.  Then a second later, boom and the tire was on the rim.

I was going 85, which is 10mph over the speed limit, which is just about the speed I’m always going.  It was pretty scary for a few seconds.  I swerved a little to the left and then back to the right.  I didn’t jam on the brakes, just let the van coast down to a controllable speed.  For an instant I thought I was going to crash, sort of like when you initially have a flat on a bike going pretty quick.

I got to the shoulder and pulled way over so my right tires were nearly in the grass.  I’ve seen too many of those horrible videos where people get destroyed while doing something on the side of the road, so I wanted a lot of room to change the tire.   Even then, I wasn’t that into cars coming by me at 80 mph.

So I went to the back and unpacked the jack, etc.  The spare is hanging from underneath the van and you have to lower it down with a cable.  It was the original spare, pretty much never used.  I was wondering if it was still good?  The inside of the rim was full or stones.

I pulled the jack out and was looking down and a semi didn’t change lanes and came by me super close to the white line.  It scared the shit out of me.  I don’t know if the guy was texting or what, but I don’t think he even saw me.  I dropped the jack and flipped him off with both hands.

So I took the destroyed tire and put it back under the car and started driving.  When I got back up to speed, I thought the spare was lumpy.  I was thinking that I was going to have to stop and buy and new tire at the next town.  Then I remembered I didn’t tighten the lug nuts.  How dumb.

I pulled over again and sure enough, all 8 lug nuts were backed off just a few threads.  So I got the lug wrench and started tightening.  Just when I was about done, a sheriff pulled up behind me and asked if I needed any help.  I told him I was just finishing up, embarrassed to say I had changed the tire a few miles earlier and had forgotten to tighten the nuts.

He noticed that there was a new brake rotor on the wheel, which was observant.  Then he took off.

I’m wondering if the Fix-a-Flat stuff had something to do with the tire going bad so quickly?  I’ve really never had a blowout in a car tire.  I’ve never used the stuff before, but know that guys that mess with patching tires hate the stuff.

I’m trying decide about whether I should get a new tire or just cross my fingers I don’t flat again. Since flatting in a car is such a rare occurrence, I’ll probably just risk it.  I have more wheels and tires at home that fit this van, so I really don’t want to buy one odd tire. 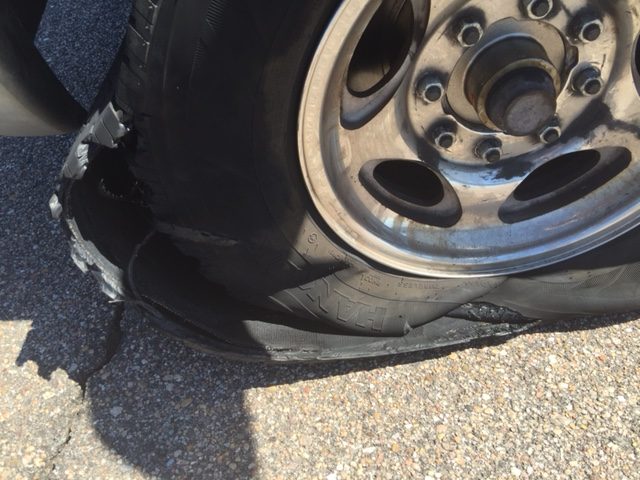 Tire when I got out of the van. 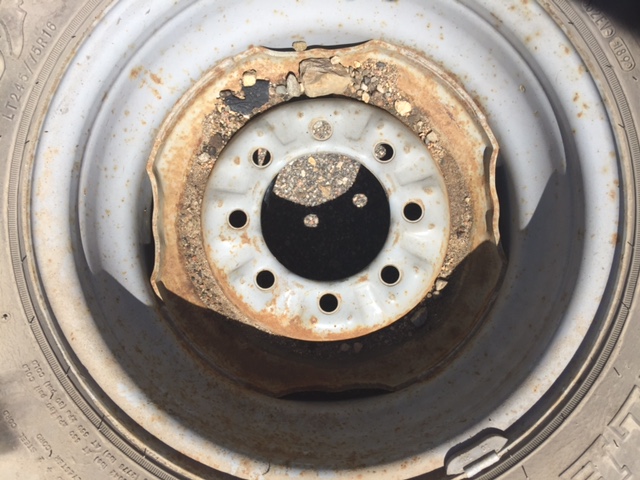 Rim of the spare from being under the car for so long. 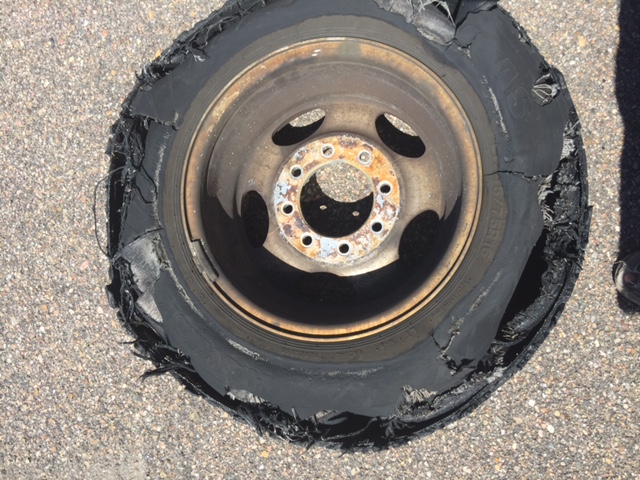 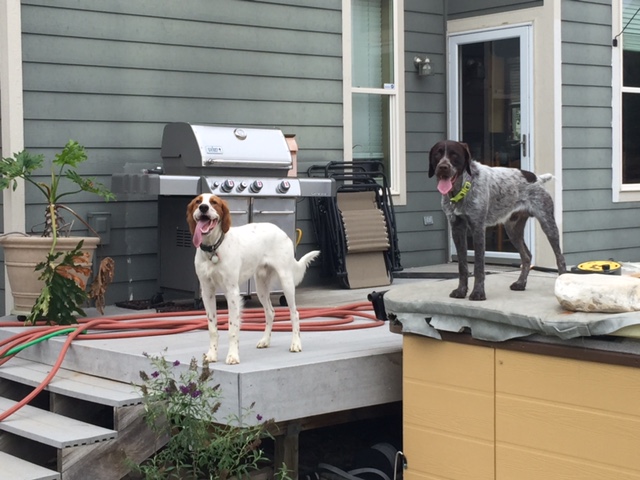 Tucker was super glad to see Nichola. They are like peas and carrots.

40 thoughts on “Blow Out – Near Disaster”