Okay, I know this is a divisive subject, but I would be negligent if I didn’t address, once again, violence here in the United States and guns.  This is so sad, ridiculously stupid and it isn’t going to improve without our legal system addressing it.  And the only way it is going to be addressed is because of our outcry.  And we should, outcry.

Here is the deal.  People are very tired of being in danger.  No one likes to be scared.  People that don’t own guns are scared because of the prevalence of guns.  And people that have guns are so scared that they think they need protection.  It is a closed circle that only makes both sides more and more scared.

The two men that were shot recently in Minneapolis and Baton Rouge set off outrage.  I’m outraged.  The regular media, ie. newspapers with investigative reporting departments, have been replaced by social media.  Each person has an ability to report current news.  And one of the by-products of this is the reporting of police, over and over again, abusing their power.

You couldn’t pay me enough money to be a black man here in the United States.  Talk about being scared.  If I were born black, I would most likely be dead by now.  For sure I would be in jail.  Do you think guns are helping this situation?

I’m not assigning any blame to the victims here, but both the men killed were carrying guns. And, after watching the videos,  it seems that the knowledge of the existence of the weapons,by the police, added to the escalation of stress and ultimately to the shooting of both of these men.

Then to Dallas, nothing has really be released through normal media, but this has to have something to do with the other shootings.   Individuals, or a group, decided they were fed up with the injustices, so they took matters into their own hands.  So they got some rifles and shot 12 police officers, plus a couple by-standers too.   Of course, I can’t understand their final decision, but I do understand the thought process.

The 2nd amendment, which the NRA, and many others, believe give the people “the right” to possession of all nearly unlimited guns.   These people are obsessed with the notion that they must fight against any and all attempts by the government to infringe upon their right to keep and bear arms.  They believe if there is any legislation addressing this, then it loses all relevant meaning.  I don’t think they understand the meaning of an amendment.   And obviously they aren’t concerned about our society.

This amendment has been spun so many different ways.  I hear people say it is a way for the people to protect themselves from the government, if the government runs amuck.  I know, for sure, that many of our fellow citizens think the police, ie, government, has indeed, run amuck.

So some guys in Dallas decided to use “their right” to purchase sniper rifles and then execute police officers, in a different city, who had nothing, absolutely nothing, to do with the previous shootings.

We all have to face it, unless we do something about all this, it is going to get worse.  On July 4th, just 4 days ago, in Chicago, over 60 people were shot.  That is in one day.  Does that outrage you?  Probably not.  You’re thinking it is just bad people shooting bad people.  That is not the case.  There are children involved in these shootings.

If the Shandyhook school shooting didn’t cause enough outrage to change our society’s rules, then I’m worried nothing will.  20 elementary school children and 6 teachers killed by one guy. And it is just the same old status quo now.

The NRA spun it as a mental health issue, not a gun issue.  Maybe they are right, it is a mental health issue.  If so, there are a lot of folks here in the US that have these very issues and they nearly all have the ability to get an assault rifle and a glock.  Plus unlimited rounds of ammunition. That is the way the NRA wants it, guns for all.

They are even against a law that prohibits people that are on the no-fly list from purchasing guns.   They are worried, like I said above, that if there is legislation to limit any gun ownership, then the 2nd amendment becomes irrelevant.

I was in the hardware store here in Hayward and they sell 50 caliber rifles.  This rifle has an effective range of 2000 yards.  A variant of this rifle has a range of 4400 yards.  This is a sniper rifle. But, I can go down to the Ace Hardward and purchase it.  Then I can sell it to anyone I want, and it disappears from being traced.  Does anyone think that is correct?  Should it be allowed?  Not me.

Most other countries in the world have gun control laws.  And after passing this laws, their homicide rates have dropped dramatically.   And the well-being of the citizens of those countries have increased.

Like I initially said, we, as a society are scared.  We are scared of each other.  We are scared because we think that another person has the ability to kill them, very easily and impersonally.

That is the deal with guns, they are impersonal.  I very much doubt the guys that shot those kids in Chicago last Monday would have taken a hammer and smashed them on their heads.  Or slit their throats with a knife.  The distance a bullet allows, the space between the people is enough to allow the confrontation to occur many times.

We’re close to a tipping point.  Many of our citizens have had enough.  This is only going to get worse.  It is going to take a dramatic shift, one way or another., If we don’t shift it towards safety, the only other direction is to violence. Serious violence, like what is currently going on isn’t serious.  This isn’t going to be an quick or easy process, either way.

It is pretty ironic that citizens from the US are using their 2nd amendment right to buy weapons to actively create a climate where our quality of life with diminish more dramatically or the amendment needs to be addressed.

To wrap this up, we all need to participate in the change.  It is going to happen, change that is. I’ve travelled all over the world and let me tell you, the countries with rampant violence aren’t close to as good of a place to live as those with civil happiness.  And most, nearly all that have safe societies are those that have gun laws.  It is an undisputable fact. 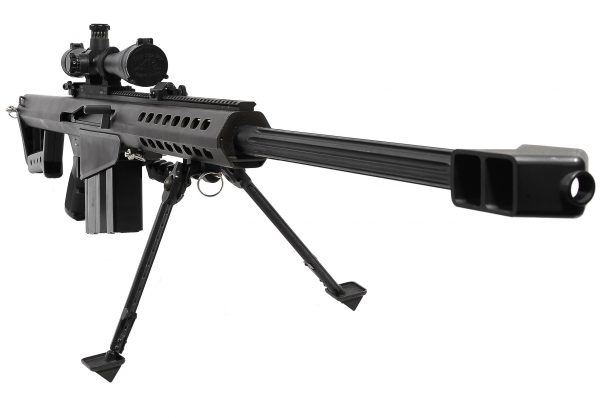 Think an average US citizen has an use for this, a 50 caliber rifle? I think not.