I went down to Lawrence with Bill and Trudi last night to eat with my team mates and have a couple beers.  We hadn’t gotten together this year and it was nice to catch up some. We were waiting at Freestate Brewery, but it was going to be over an hour so we ended up down the street eating Mexican food.

Anyway, after dinner we were all talking about how hard it was to train since there has been ice and snow on the roads for the last couple weeks.  Eventually, my two young team mates, Benn Stover and Garrick Valverde started talking about riding Zwift.  A couple days ago, a few guys left comments that I should try Zwift to help shorten the perceived trainer times.

Zwift is a 3D cycling app that allows a rider to participate with other riders on the internet.  It has different courses and you can race or just ride different places.

I’ve known about Zwift for quite a while.  My friend, Mike McCarthy sent me an email a couple years ago about trying it out  Mike was World Champions in pursuit and is in the Bicycling Hall of Fame.  It was in the prototype phase then and since I didn’t really think I’d ride a trainer that much, I just skipped it completely.

Now I’m sitting at a team dinner and listening to Garrick say that he was riding along the coast and a group of 60 guys blew by him and he had to chase them all day.  It was funnier than shit. Benn said the same thing, he was “riding” along with one other guy and the guy jumped him.  It is so weird listening to them talk like it was really happening when in reality, it is an interactive video game.

Anyway, I think I might have to try it out some, just to keep up to speed with current trends.  It would be like not knowing about Strava as a cyclist, so it is nearly mandatory to at least get up to speed with it.  It you go to the Zwift website, you can get a couple weeks free.  I think if you’re a Strava premium member, that expands to two months.  That would get you most of the way through the winter, unless you live on the Canadian border.

Anyway, I’ll let you know when, or if, I try it out.  I rode outside yesterday for a couple hours and have a scheduled ride again today at 12:30.  It is supposed to be nearly 40 today, but windy once again. 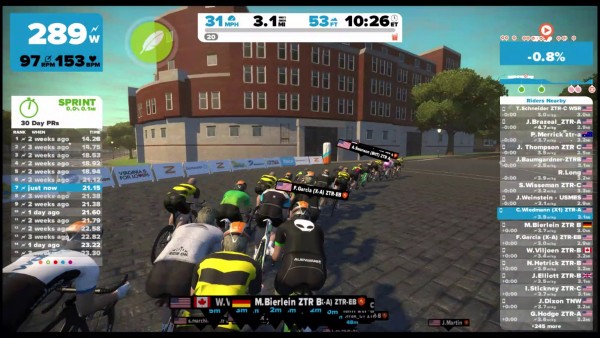