Winter started last night.  Today is officially the first whole day of the season.  Seasons are important to cyclist/athletes in general.

When I first started racing, back in high school, winter was a time you never even thought about riding.  We had some Weighless rollers and we sometimes started riding them a few days, maybe a week before the Mt. Oread Cycling Team would put on the annual rollers races at KU’s student union.  But that was just for fun.

We never started riding until maybe February.  But back then, the winters seemed harsher. They were harsher.

I used to be able to ice skate down a creek below my house to downtown to work at Gran Sport Bikeshop.  That creek hardly ever freezes anymore.

I’m not sure when this whole year riding started.  I think media had a ton to do with it.  When people found out that someone was down in Texas, Arizona, or out in SoCal doing big miles, then that disrupted the whole psyche of the whole local racing community.  Soon I became that guy.  Who wants their psyche in turmoil before the season has even started.

Plus, the development of way better clothing helped with the ability to be able to stand the elements.  When I first started, my mom bought me a baby blue tennis warmup suit.  Like full baby blue, bottoms and tops.

I would always wear the bottoms, with the legs tucked into my socks to keep them out of trouble.  When it was cold I would wear a Northface down jacket.  Can you imagine, training in a down jacket?

I remember one time riding 15 miles to Auburn Kansas, nearly my first ride of the year.  By the time I got to Auburn, I had completely sweated through the down jacket.  Heading back north, the jacket was a different color of green and held no insulation properties.  I literally froze.  I’m not sure what I was wearing for gloves, but nothing compared to current gloves choices.

Gloves are really the key to me being able to ride when it is cold out.  It seems as I get older, my hands are worse and worse.  It probably doesn’t help that I’ve froze them a couple of times too many.

Anyway, winter doesn’t seem like it slows down much here ride-wise.  Kansas has pretty tolerable temperatures most of the winter.  Most people think the winter here is like Minnesota and the summers are like Houston, but in reality, it is pretty mild.  Here’s a little info I stole from some weather site –

The warm season lasts from May 29 to September 16 with an average daily high temperature above 79°F. The hottest day of the year is July 24, with an average high of 90°F and low of 69°F.

The cold season lasts from November 28 to February 23 with an average daily high temperature below 48°F. The coldest day of the year is January 10, with an average low of 18°F and high of 37°F.

So, you see, it isn’t really that bad.  The average high on the coldest day is still supposed to be around 37.  I rode yesterday at 28 and it wasn’t that bad.

Anyway, hope you’re holidays allow enough time to get on you bike at least a couple of times.  If you’ve already retreated into the depths of your basement and you bike is set up on a trainer, maybe consider going out for an outside ride the next few days.  I usually try to ride to downtown Chicago from Mt. Prospect on Christmas Day.  For some reason it seems different. People seem nicer and the ride just seems better.

WInter really isn’t that long.  It is really 1/4 of the year, but we all know it really doesn’t last that long, right? 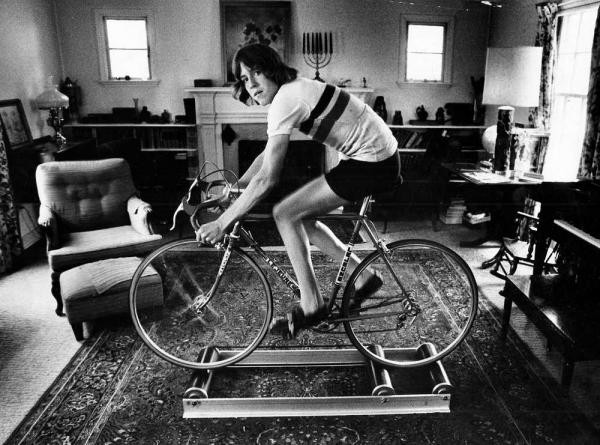 Riding rollers when I was 14. This wasn’t the winter though.