Hi, it is a week until Leadville.  I’d don’t think I’ve ever waited around this long to race a race in my life.  I used to train a bunch at altitude for the Coor’s Classic, but that was for a two week stage race and I’d usually break that up by flying somewhere to race on the weekends.  This has been totally different.

I’ve ridden over at Leadville 4 times now.  I have ridden the whole course, but not the whole course both directions, since it’s a out and back.  I’ve been skipping the middle flatish section between the early climbing, Powerline and the turn around climb, Columbine.  I’ve ridden it going out, but not coming back towards Leadville.

Yesterday, I just parked at Hwy 82 and rode the couple miles to Columbine and up it.  I hardly ever feel good riding from the get-go anymore.  It took me 20 minutes of climbing before I felt alright.  I did ride the top portion of the climb pretty well, at least for me and my Strava time gave me confidence that I’m on the right trajectory for next weekend.  Coming down, to Twin Lakes, my time was just a couple minutes off race winning times and I wasn’t killing it on the flat, plus I had to stop twice to open and close cattle gates.

It going to start getting busy here in Colorado.  Catherine is coming out from Kansas, plus Stacie and her family are in Vail this whole week.  Trudi’s sister is going to be in Vail too, so she is coming over after the Tour of Utah a couple days early, and hanging, then helping me at Leadville.  Then she has to scoot over to Steamboat for the start of the Pro Challenge.

Utah has been pretty good so far.  All domestic teams have won each stage.  I was taking to Jonas Carney a couple months ago and he was saying this guy, Michael Woods, from his team, Optum, is the real deal.  And yesterday he proved it by jumping away from the field at the end and winning the race, taking over the race lead.

After that, Chris Horner changed his tune and said that Woods is the full on race favorite now, not him or Frank Schleck.  I’m going to tell you what I’m going to do.  Sunday, after the last stage, I’m going to pick the race favorite and who I “think” is going to win the race.   I thought Chris was the man, but maybe he just forgot Michael when he made his pre-race predictions.

I’m heading down to Arvada later today to hang with Vincent and his new puppy.  Before that, depending on what Catherine wants to do, I might ride over to Vail and back.  Sunday I’m going to ride over to Louisville, a town outside of Boulder and race a criterium.  I could use some intensity, not that climbing 22% grades at 12,000 feet isn’t intense.  Brian is thinking about heading over to Vail tomorrow to hang with Stacie and Karl, I can’t seem to talk him into racing. There are too many places to be and not enough time.

How about Lawson Craddock’s finish yesterday in the Tour of Pologne.  It was the Queen stage and there were 8 Cat. 1 climbs.  He finished third.  Seems like he did a pretty unbelievable job recovering from his crash early this season..  He’s hoping to do the Vuelta, so this had to have been a big boost for that.

Okay, it is supposed to do the normal afternoon shower today, up in Summit County, so I’d better get moving.  Have a good Saturday. 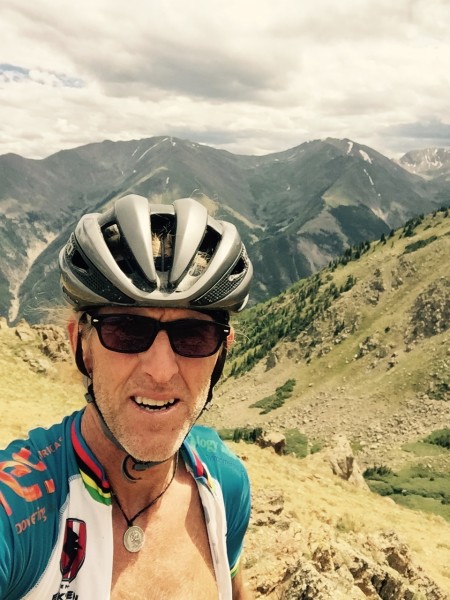 Top of Columbine yesterday. I barely got down before the rain. 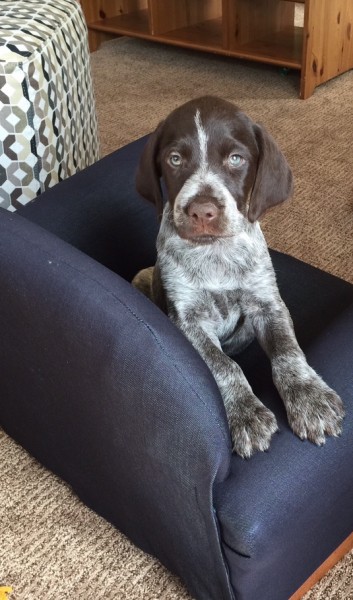 Vincent’s new puppy. I think his name is Nicholas, but I’m not sure. 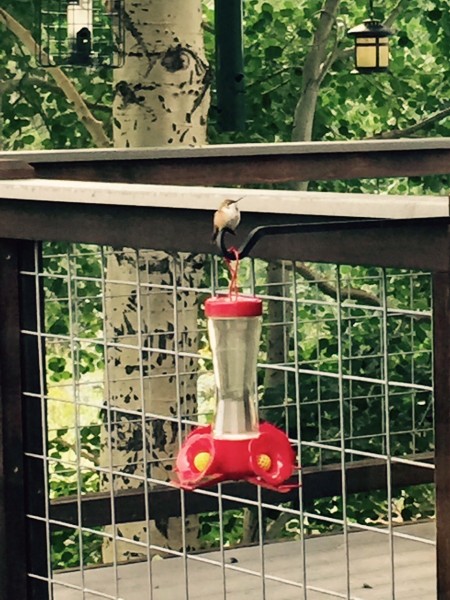 This hummingbird is a little nectar hog. He sits on top of the feeder and guards it all day.