I was watching the Tour yesterday and was interested in how quick guys were getting front wheel changes when they had a flat.  Some teams seem to do it pretty quickly, but for sure, there are others that have serious “lawyer tabs” on their forks, so their mechanics have to spin the front quick release quite awhile before their secure the wheel.

I pretty much hate the tabs on the forks that “prevent” your wheel from coming off, in case you forget how to properly use a quick release.  They are just a hassle.

I have ground dozens of them off of different forks I own.  Road, cross and front forks on my MTB bike.   For racing there is no place for lawyer tabs.

The rule that makes this all pertinent is the UCI rule – Article 1.3.002, which states,, “A license holder is not authorized to modify, in any way, the equipment given by the manufacturer used in competition.”

I would have thought by now there would be a fork manufacture that would produce a race fork without the tabs, but maybe that is against government law?

I’ve left my tabs on both my road and MTB bikes.  I don’t have any tabs on my cross bikes, which is strange, because those are the races where I have the highest chance of having my bike checked by the UCI.  I have ridden some UCI MTB races and no one looked at my bike there.

Throwing out the problems of removing the front wheel quickly for a wheel change or repair, the hassle of putting a bike on and off a roof rack, especially and older roof rack, is a real problem.  Spinning a quick release on a roof rack is sometimes problem, so taking a bike on and off the top of a van, ect., can really turn into a task.  That is probably what I hate most about the tabs on a fork.

Anyway, just a little short rant about a bothersome rule that really has no place in the sport. These tabs don’t add any safety to bike racing.  If anything, they add additional stress, which most likely detracts from a riders safety.

I understand the rule, I just don’t think the UCI should be enforcing it in this instance. 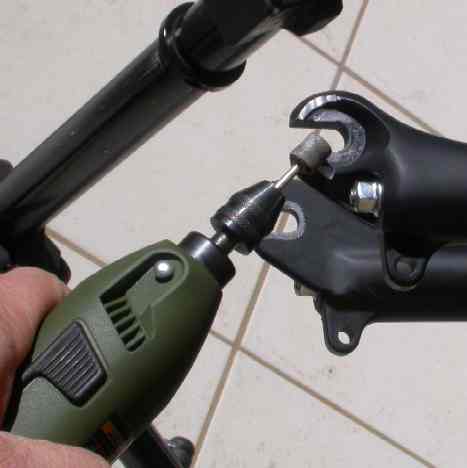 If I had my way, this would be the best way to deal with all lawyer tabs on forks.

52 thoughts on “Lawyer Tabs or Not”