Yesterday’s ride turned into a crazy adventure.  I was up for an adventure.  I like riding with Vincent and haven’t seen him for a while.  He suggested we do a ride that I did last year, down to Midturn, the Red Cliff, up a gravel road to Shrine Pass, Vail Pass and then coast back down to Vail.

I said what chance to you think we’ll be able to ride that.  He said 90%.  I was thinking more like 40%, but I was okay with just seeing how it went.

It was pretty good for a while.  The ride to Red Cliff was nice.  Then you start climbing on a narrow gravel road beside a stream.  We were just talking and everything was good.  Like I said above, I’ve done this ride a couple times before on my road bike and it gets a little loose and steep towards the top.

We started running into some patches of snow on the road after a few miles.  Just short 20 meter sections, then we could ride again.  Then the sections got longer and eventually we had to walk.  The problem was that a bunch of snow mobiles had packed down the snow and it was melted everywhere but on the road.

It looked like it was going to clear up, maybe, then we got up to a sign that said Vail Pass 4 miles.  That was not good.  Walking in our road shoes on snow for 4 miles didn’t sound too fun.  And we’d already walked a lot through snow and trying to descend back through that was going to be very difficult.

So, we talked and decided to take a “short cut” and head over the ridge towards the interstate and the Vail bike path.  We started up towards the ridge, in mid-calf deep icy snow.  And it only got worse from there.  Eventually we were sinking into our crotches every once in a while.

This was serious and I mean serious bushwacking.  At the top, we could see the highway below and knew it was going to be steep in places going back down.  We were sort of walking, sliding down these deep snow ravines with our bikes.  You wouldn’t think it, but having our bikes with us really helped.  You could apply some pressure to the bike and many times that would stop you from your whole leg punching through and having to dig yourself out.

We came to a couple sheer cliffs and sort of just winged it, going in another direction to where it was the lowest.  We had to climb down one 30 foot section, using a pine tree to hold our bikes as we lowered ourselves.  Vincent sort of tossed his bike at this time.  I refused to hand him down my bike until he promised me he wasn’t going to throw it down into the snow.

I have to admit, but there were a few times that I was out of my comfort range.  That isn’t something I experience very often nowadays.  I was sort of relishing that feeling for some strange reason.  There was a real chance that it wasn’t going to turn out that great.

We finally got to the bottom and had to go across a small stream that was snow runoff.  Vincent went first and said the water wasn’t that cold.  I followed and realized that the water didn’t seem that cold because our legs were completely frozen.  I refused to put my bikes in the water, didn’t want my bearing wet, but it was iffy with the lack of foot feeling.

The people riding by on the bike path always asked if we were good, which was nice.  We looked like we’d gone through a war.

Riding back down to Vail was amazingly good.  I didn’t put my socks back on and we pretty toasty warm the whole way.  It felt so good pedalling.  Whenever it flatted out, my legs were toast.

We only had 37 miles riding and walking, but we were out 5 1/2 hours.  I think we were doing the backcountry thing for about 2 hours.  It seemed much longer, but that was just the time not on the road.  We’d walked a bunch by then already.

I’m not that bad today.  And I sort of enjoyed yesterday, is a weird way.  I think the walking in the deep snow was exactly what my hip needed.  It has been babied enough and it is about time I start doing some other exercises other than pedalling around in circles.  This was pretty low impact and really strenuous.

Today we’re just going to do a normal road ride.  Maybe the Copper triangle or over to Frisco, around Lake Dillion and back to Vail. 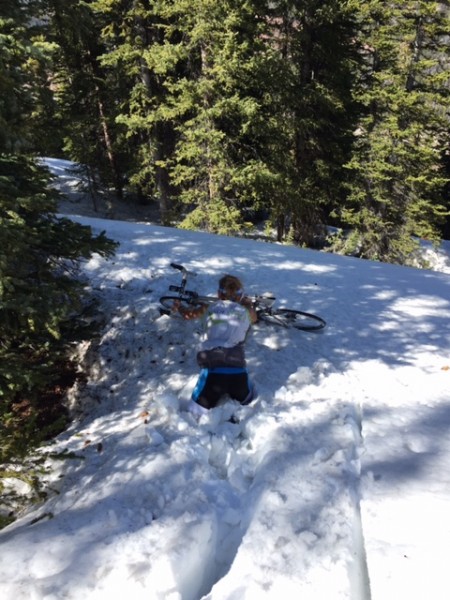 It wasn’t like this continually. This only happened about once every 5-10 minutes. It was sometimes pretty hard extracting myself. 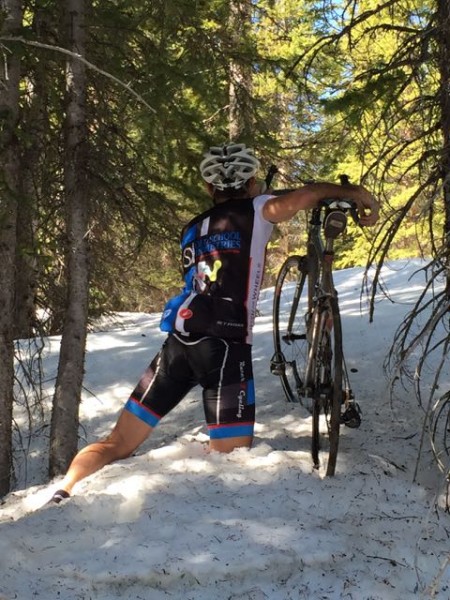 VIncent trying to use his bike to get his leg out. 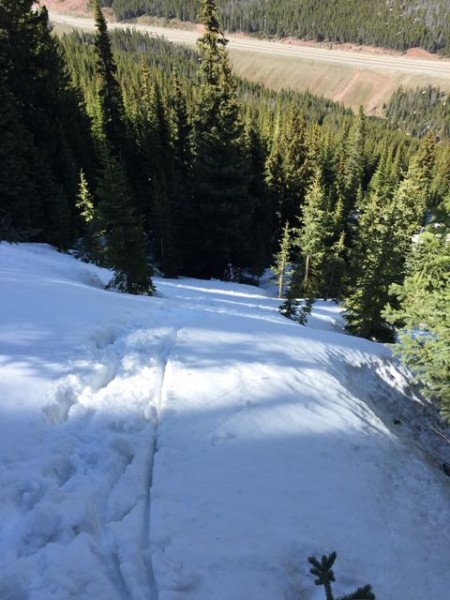 This is way steeper than the photo protrays. Like steep enough it would be hard to walk down without snow. 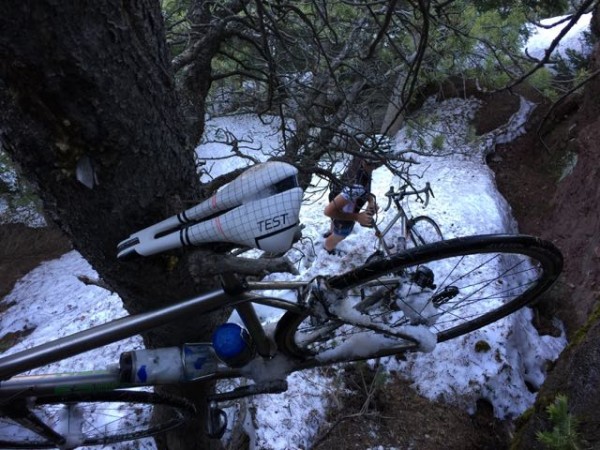 Climbing down a pine tree with my bike. 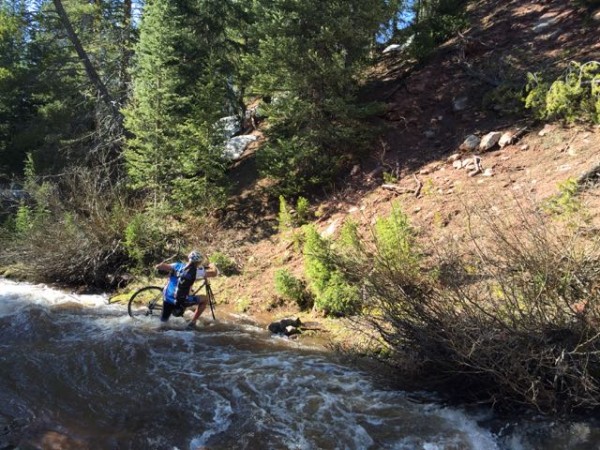 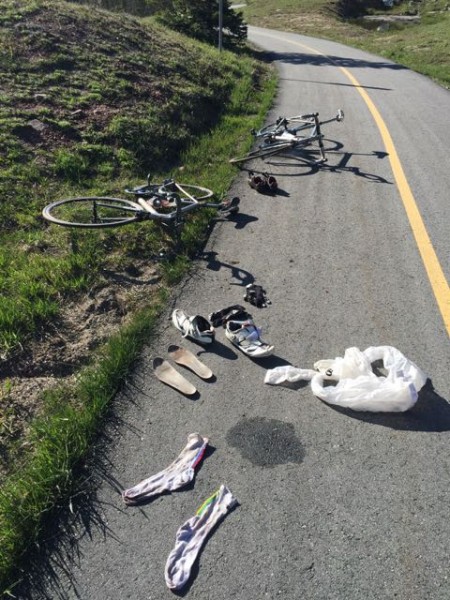 Yardsale when we finally got to the bike path. 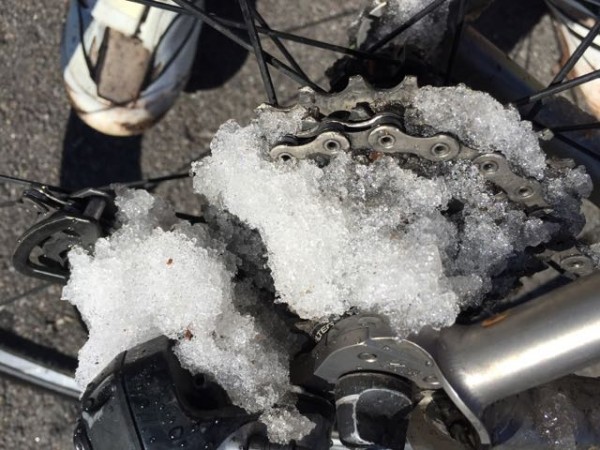 My cogs were a little clogged with snow initially. 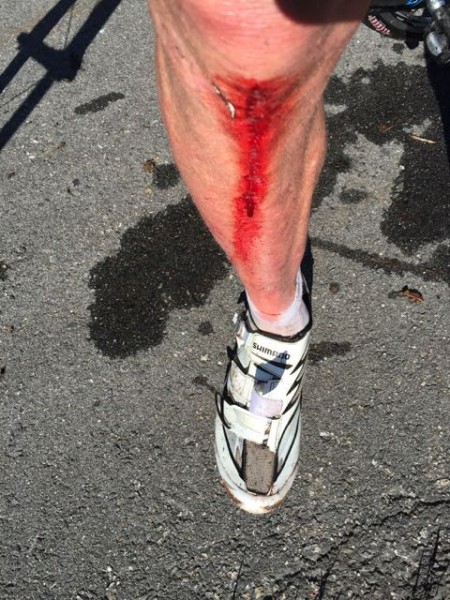 Both my legs were scrapped pretty good.

38 thoughts on “Back Country with Road Bike”