Okay, these riots in Baltimore the last few days have been pretty crazy.  It really isn’t about the death of Freddy Gray.  That might have been the catalyst to start them, but this has been building for a while, everywhere.

Obviously, a bunch of people aren’t too happy with the Baltimore police after Freddy Gray ended up dead, with a broken back, after entering a police transport vehicle.  But these riots could be going on many places here in the US.  The anger is from the injustice pertaining to socioeconomic status and other huge issues relating to race.

The video footage of all riots are disturbing.  Everything about a riot is screwed up.  No one wins in a riot.  You can’t win a riot.  Everyone and everything loses.  Maybe the looters of CVS, who got a big arm full of diapers sort of won something, but in reality, in riots, everyone loses.

So, lets just take the cause and reasons out of this discussion.  And try to remove race too. This could be a riot after the World Series, or NCAA Basketball Finals, a rock concert, or for any number of reasons, in many different places.  Let’s try to look at this as any random riot and the police were trying to control the outcome.

This riot happened to be in Baltimore.  There are a bunch of videos out there that show police actually throwing rocks back at the protesters.  How stupid is that?  Police have to realize that nearly everything that they do, nowadays, is going to be captured on video.  They can’t do something as stupid as picking up rocks and hurling them back at the guys throwing them.

Here’s the deal.  Throwing rocks and bricks at police is really, really bad.  Someone could get killed.  But the police are there to try to establish order.  To stop the rock and brick throwing. Hopefully, by their presence, but if necessary, by arresting the guys doing it.

But there is never a case that it is okay for the police to actually participate in the rock throwing. They shouldn’t, and can’t get caught up in the escalation of the situation. This wasn’t a joust.  Or tit for tat.  It was a riot.   By them throwing rocks back, they are participating in that riot, not policing it.

Nothing guarantees that a rock that the cop throws is anywhere near accurate.  What if there is an innocent homeowner, standing in their yard, trying to protect their property and a rock, that left a police officers hand, wacks them on the head.  Who do they call?

The police are there to arrest people that are throwing rocks.  There isn’t another level of protection that can go up to the police officer and arrest them for escalating a riot by throwing rocks.

Like I said above, everyone loses in riots.  Property is destroyed, people are hurt and nothing gets figured out.  At least the police didn’t pull their guns out and start shooting.   But, I might understand that more than them picking up rocks and hurling them back.

Being a police officer is a job, a volunteer occupation.  The police can’t lower their, thus our, standards and fight back.  That isn’t their job.  They can’t let their emotions rage out of control and take the law into their own hands.  Their job is to defuse the situation.  By throwing rocks, they were escalating it. 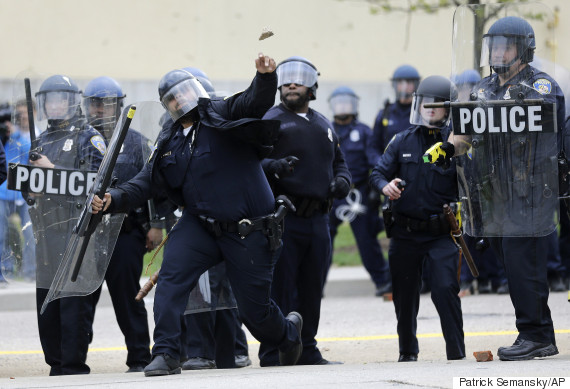 Or a little May Day action in Seattle today?  This is on Capitol Hill.  Not the ghettos of Baltimore.  The one bike cop makes a pretty nice on the fly tackle off his bike.  Wonder what that guy did to piss them off?

55 thoughts on “Police Throwing Rocks Back”