That’s right.  I would have bet almost anything that I would never have a reason to actually purchase Epogen (EPO).  But I would have lost that bet.

I know the title is a little misleading. I am getting it for my dog, Bromont.

Bromont has been really slow recently.   That is to be expected with terminal HSA cancer.  But his gums are whitish and obviously he is low on red cells.  So we took him in for a blood test today and his hematocrit was 15.2%  It was 27 two week ago, and 38, 2 weeks before that.  The normal range is 37-62.  So, his is less than half of normal.  His red count is less than half of low also.

There are a couple reasons that could cause this.   His red cell production could be suppressed in the marrow due to cytokines stimulated by the tumor, microangiopathic destruction of red blood cells as they pass through the tumors.  Or, he has chronic bleeding.   Or, I guess, both.

So, I got on this kick that he isn’t comfortable and that he needs more oxygen, thus red cells.  After doing some a little research, perhaps not enough, I thought that maybe EPO would be of benefit to him.

Anyway, when Bromont went to get the blood test, we got 1 ml to start.  I gave that to him yesterday.

It was pretty weird holding that little vial of water-like liquid in my hands.  It contained the substance of what could be the difference between a mediocre athlete and a Tour de France winner.  Just a little clear liquid, that isn’t all that hard to obtain.   It all seems so silly.  It seems so wrong.  It was creepy.

After doing all this, I spent more time and did a lot more research and I’m of the opinion that it won’t help.  I don’t think that any amount of EPO is going to enable him to make the appropriate amount of red cells to stay somewhat healthy.  I’ve already special ordered the EPO from the pharmacy, so I hope they don’t make me take it. Thus, the regret.

So, I decided on a blood transfusion route now.  This morning, we’re taking him to K-State to get a 5 hour blood transfusion.  In theory, it will double his hematocrit.  I don’t think there is any way to know how long that will last.  In kind of depends on why he doesn’t have any now.  His levels dropped from 27 to 15 in two weeks.  I guess the best we could hope for is the same again.

I didn’t have any idea if they happen to have a bunch of dog blood sitting around.  His type even.  Sounds like they do.  I wonder where they get that?

I’m not trying to play God or anything with my dog.  I’m just trying to make him as comfortable as possible through all of this.  If this makes him feel better, then I’m all for it.  I’m a little torn about having him at the vet school for 5 hours, but hopefully I can sit with him the whole time while he gets the blood.

This whole process is a learning experience.  What I’ve learned so far is that you don’t have any idea where you are in the process.  If you would have asked me two weeks ago, on any given day, whether he would still be alive two weeks later, I might have answered, 100% no, or 100% yes, just depending on what hour of the day the question was asked.

My vet, who is an avid cyclist, told me he would keep it quiet that I got EPO for my dog.  He said next thing you know, I’d be getting it for my grandmother, etc.  It is so weird that the only reason I know of this drug is because of the abuse of it in our sport.  I really thought that Hemopure would be the perfect drug for Bromont.  Wow, now that I looked that link up, I see that it was approved for canine use in 1998.  I wonder about the availability of that?  It might be better than a transfusion.

Anyway, Bromont seems happy enough.  He likes to go for car rides.  He loves sleeping with us.  Every once in a while he plays a little still.  He likes to take walks, but not very far.  He is a pretty picky about food, but he always was.   I love the dog to death and feel obligated to do everything in my power to help him feel as good as possible as long as possible.  It’s as simple as that. 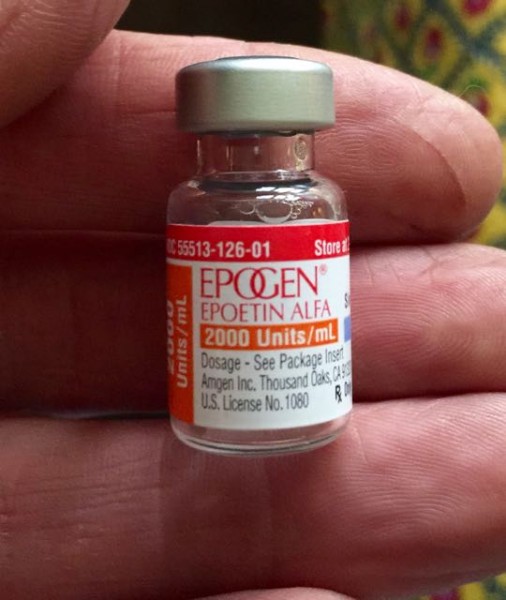 Here is a vial of the drug of choice for endurance athletes the last two decades or so. It seemed so weird even holding it. 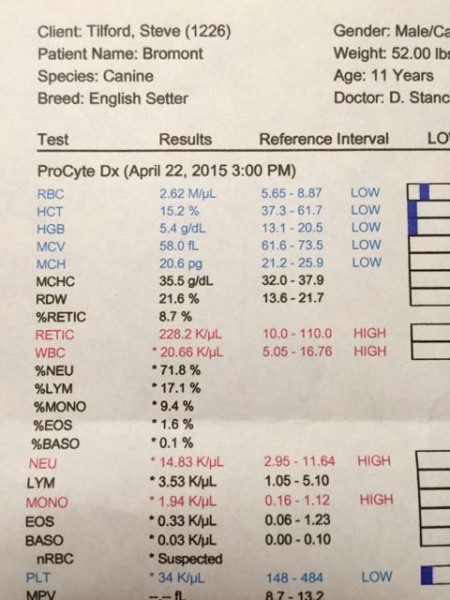 This blood test was very depressing. His blood is total shit. I hope I can do something to make him feel a little better for a short time. 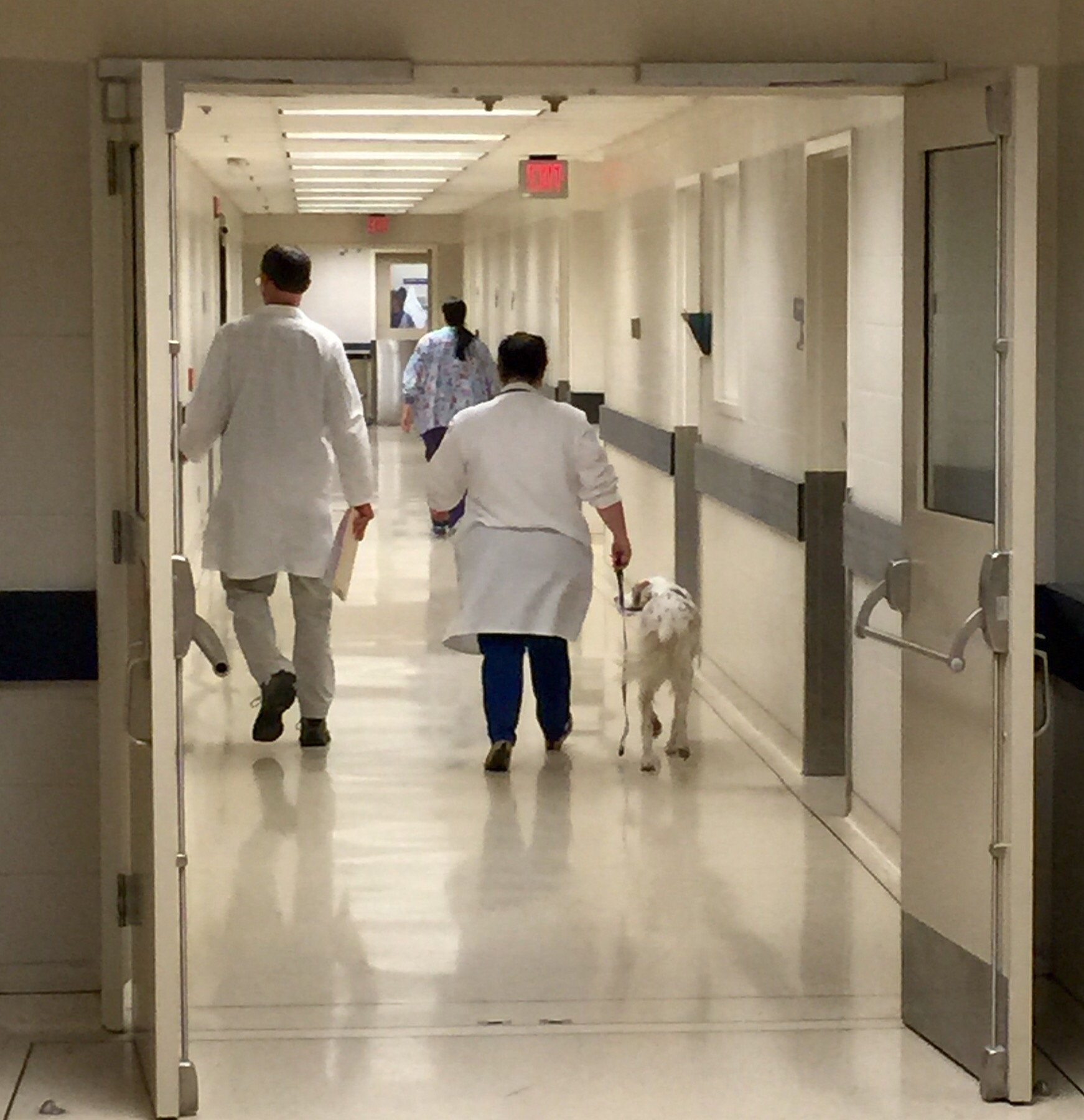 Bromont on his way for some new blood.

45 thoughts on “Bought EPO and now Regret It”