Okay, the reason I’ve been so stressed the last few days was because we got Bromont’s pathology back last week and it wasn’t good.  Two out of 4 of the masses he had removed were malignant.   It is called cutaneous hemangiosarcoma, HSA, which is pretty common in dogs, but is also very serious.

So, we took Bromont to K-State to see Dr. Harkin, a cyclist, that took care of our dog, George, and whom I trust implicitly.  Dr. Harkin did an ultrasound of Bromont’s abdomen, specifically his spleen, and again, the finding weren’t great.  He had a bunch of nodules on his spleen, which is usually where hemangiosarcoma would be.

It’s not a good thing.  It is a very aggressive cancer and the survival rate is virtually nonexistent.  So, that was it.  We scheduled Bromont to have his spleen removed tomorrow.  The only real way to know exactly what is going on is to do the pathology on the spleen.

I was pretty taken back by the discovery.  Trudi is in shock, I think.  She loves Bromont with all her soul.

I started doing some research about HSA and got questioning whether we were doing the correct thing.  If it is in his spleen, there is no survival.  His life expectancy is pretty short, weeks, maybe a couple months.  That is if you do chemotherapy after the splenectomy.  If not, it is statistically measured in days.

I wrote a few people asking for information on clinical studies on the disease.  It doesn’t have much traction in the academic world because the cancer isn’t one humans contract, so there is no money to do much research.

But yesterday I got a call from Trent, the veterinarian, also a cyclist, that removed the masses in Ft. Collins last week.  He said that he talked to an oncologist and that the mitotic index was 2 per 10 hpfs, meaning that there were very few cancer cells and that the hemangiosarcoma was considered low grade.  He thought that the ultrasound of the spleen was atypical for HSA.

There are other reasons that there could be nodules on Bromont’s spleen – old dogs have nodular spleens, other types of “curable” cancer, nodules related to a tick-borne disease, and more.

I sent Dr. Harkin an email and asked him a bunch of questions.  He too, had taken Bromont’s pathology to an oncologist.  His oncologist also said that with such a low mitotic index, she didn’t think it was metastatic hemangiosarcoma.  But they had looked at the records of some other dogs they had treated with cutaneous hemangiosarcomas, and that they had HSA in their spleens.

Anyway, long story short, we decided that the spleen needs to be removed.  Mainly to get a real good look at it to see exactly what is going on.  Ultrasound guided biopsies have too big a chance of false reading and would really be almost valueless in this situation.  At least there is a chance, I’m not sure what, but some chance that the cancer was only cutaneous (skin) and that is was completely removed.

I don’t have a spleen, so Bromont and I will match in that respect.  I guess mammals, maybe all animals, can get along okay without spleens.

I was thinking about not posting this, but it has pretty much consumed the last 5 days of my brain, so I thought I’d just put it out there.

Bromont hates going to the vet.  I’m worried about him being so stressed out.  We’re driving Bromont to Manhattan this morning and they are most likely doing the surgery tomorrow. He has to stay until Friday.  I’m not sure when we’ll get the pathology back, but is is going to be pretty stressful until then.

I hope we’re doing the right thing.  This is an incurable disease.  And either he has it or doesn’t.  I guess we can only do what we do.  It’s more for peace of mind, I guess.  Knowing is better. 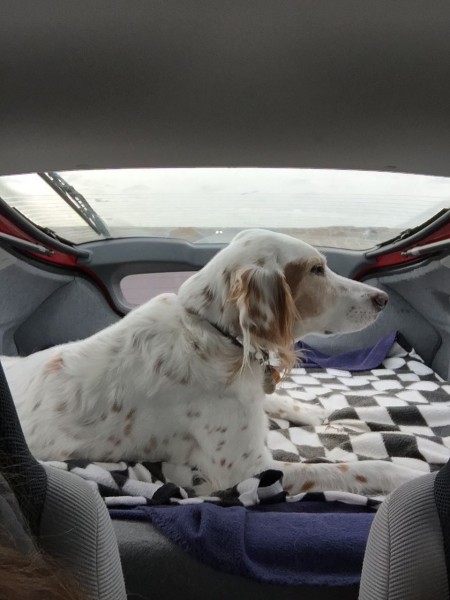 Bromont likes riding around in the back of the Honda Insight. 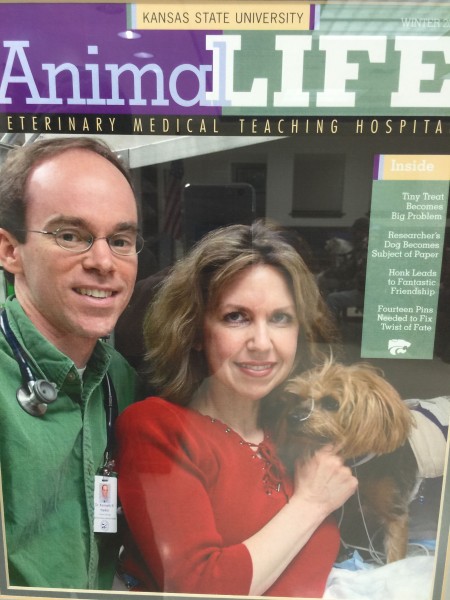 Dr. Harkin, from the wall of the K-State Vet School. 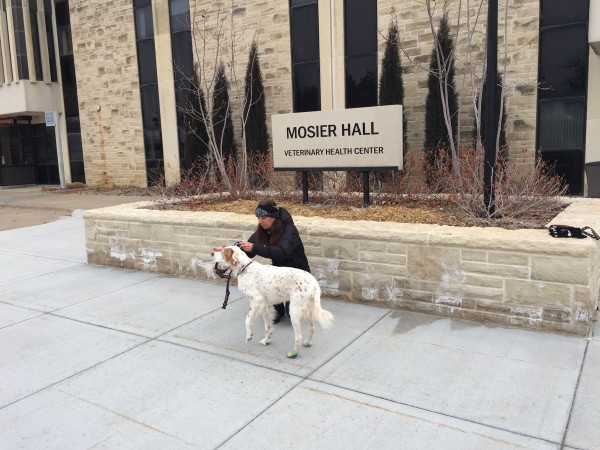 He hates going in. 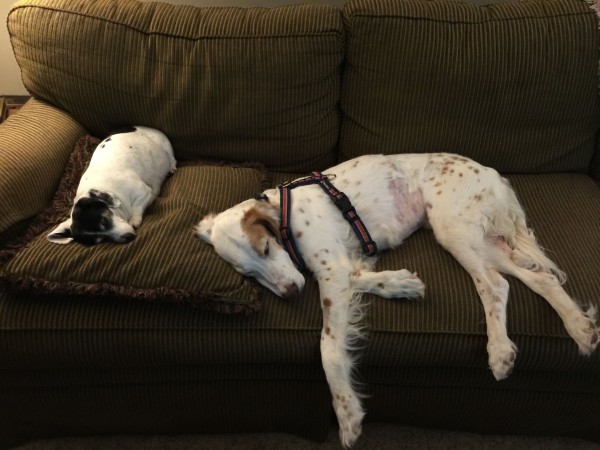 He’s been kind of just laying around the last few days. He doesn’t feel well. This is Frankie next to him. 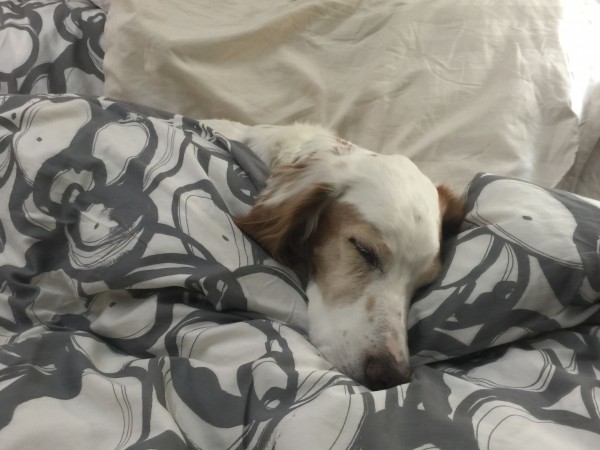 Last night in a bed for a few days. He is very lovable.

53 thoughts on “Bromont’s Pathology was Bad”