Late last night, under a half-full moon, I went outside, in front of my house, wearing jeans and Merrell boots, I did a little jogging.  And by little, I mean that I just went a few steps, well, many more than a few steps, but not a city block.

My problem was, one, it hurt my previously broken, but “now healed hip” a little, plus, I couldn’t really tell if I was limping.  I don’t want to be jogging if it is going to be contorting my body all out of shape and make something else not work right.  I need Burt, my PT guy, to take a glimpse of my stellar form and critique it some.

I am in pitiful all-around shape.  Bike riding, I’m just in off-season form.  But, my general overall strength sucks.  Even though I’ve been carrying bags of concrete and heavy things around recently, I don’t seem to be getting any stronger.  That is a mild surprise.

I did cross the 11,000 mile mark for the year, yesterday on Strava.  That is without really riding my bike much at all for about 3 months or so.   I would have had a pretty big mileage season this year without breaking myself.

I think yesterday was the 5th day in a row I‘d ridden and I was pretty fatigued.  That was sort of surprising.  I wouldn’t have thought that I would be so out of shape, but I had pretty much taken two out of the last four weeks completely off, from riding.  Man, it takes so long to get form and it disappears so quickly.  Doesn’t seem right for some reason.

Last night we unloaded the furnances and a/c units I got from Vincent and then, since we were already downtown, went by the holiday parade.  We didn’t have a leash for Bromont, so Trudi just tied a long strip of curtain to his halter.  It actually just looked holiday-like.

I was surprised how many people were out.  The parade is really mainly a collection of weird automobiles and such, decorated.  There were the Shriners, with their little cars and motorcycles.  And a few actual float-like flatbed trailers.  It was pretty fun, and since it was so warm, nearly 60, it seems like everyone was in a pretty festive mood.  I wouldn’t have normally went and glad I happened by.

It got cold last night, the temperatures dropped 30 degrees.  The high today is supposed to be in the 30’s, but that isn’t lasting for long.  By Tuesday it’s supposed to be back to the mid-40’s and then the 50’s again by the weekend.  Kansas doesn’t have horrible winters, usually.  Most of the time, at least recently, you can ride nearly all winter without much of a problem.  Hopefully that will be the case this year.  I missed so much of summer, riding, I’m not really ready for winter this year. 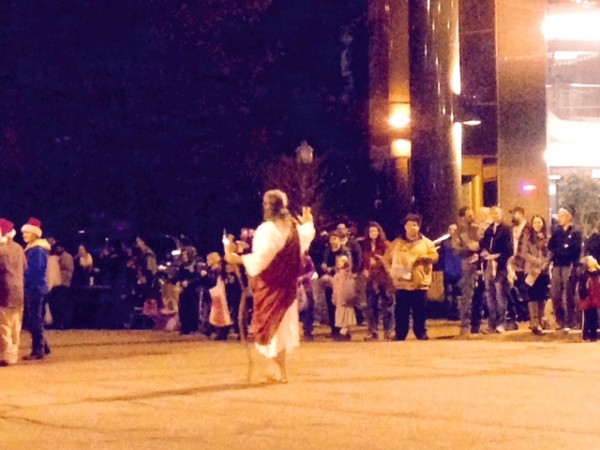 I have never really seen a guy walking in a parade portraying Jesus.  I liked it. 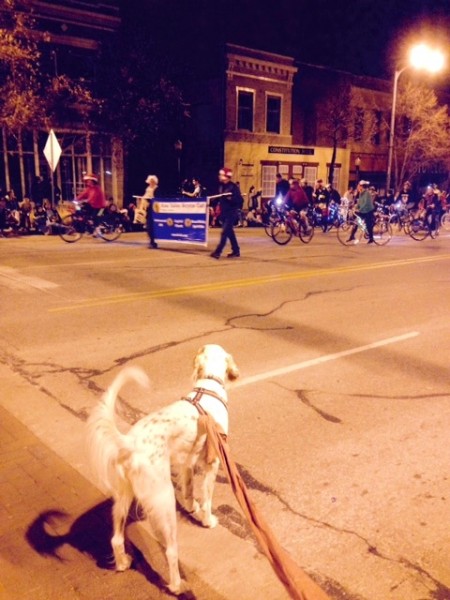 Bromont got all excited when the local bike club came by. 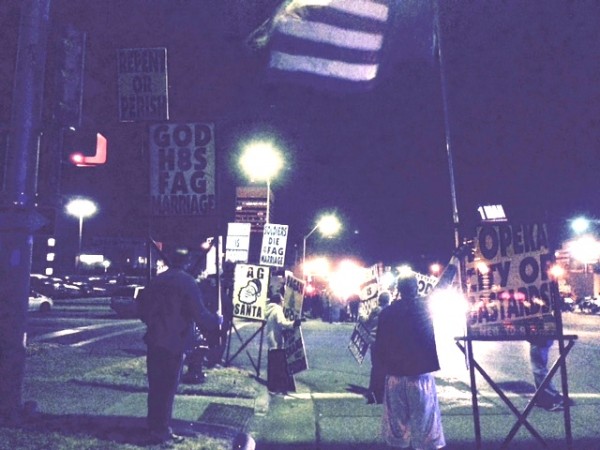 Of course, the Phelp’s, Westboro Baptist Church was there protesting. They were playing a song on speakers, saying that Santa Claus will take you to hell. No one was really paying much attention, which is how it should be.

10 thoughts on “Jogged a Couple of Steps”