Okay, I’m settled in at the Walberg’s new apartment in Seattle.    Super nice place.  I slept 9 hours, which seemed short, so I probably need more.  I’m still a little tweeked from the past couple weeks.

I am surprised I’m not more wasted from the 80 miles I did on Monday at the Mike Nosco ride.  During the ride, I felt pretty bad the first hour or so, and predicted, to myself, that it was going to end up a cramp-fest, but that never materialized.

This is the 5th year I’ve done this ride and it has grown tremendously.  It is great for the ride that the numbers are up, but it has switched up the feel of the event.   Somehow, the last couple years, the ride has nearly turned into a psuedo-race at the front.  More of a Gran Fondo pace that that of a bunch of bike racers riding a benefit ride.  At least this is the case at the front of the ride.  The great thing about it, you don’t have to participate in the fray and can’t just ride with friends.

The day was perfect, mid 70’s by the coast, maybe 10 degrees hotter in the canyons.  They moved the start a couple miles up the road, which kind of threw Sue and I off.  We drove to the old start and had to hightail it over to the different start area.

I got suited up and realized that there was a ton more team support, etc. at the ride than the previous years.  I got over to the start and said hi to a few of my friends I don’t really see unless I come out there to ride.  Sort of a once a year get together.  I talked to my ex-teammate, Roy Knickman, for a bit, and then we were off.

The ride starts down a couple mile descent that the Campy car controls at less than 20mph.  It is a little hairy going that slow downhill, but it seemed to be pretty safe.  We stopped at the accident site where Mike Nosco was killed while riding and his brother Jack, gave his annual inspirational talk.  It was short, but heartfelt.  Then it was off.

And it did go off.  It was windy and pretty soon we were cruising along at over 30mph  to the coast, in crosswinds.  It is the fastest I’ve ridden in months.  It wasn’t that hard if I stayed in the draft, but it really strung the whole group out.

The ride really just rides along the coast,  on the PCH, and goes up and down three big climbs.  The first climb is Deer Creek, which is the hardest.  It is just a couple miles long, but it is really steep.  It got going pretty quick before the Deer Creek turnoff and didn’t slow much once we turned.

I realized about 100 meters into the climb, that this wasn’t for me.  It was going to be a full-on race at the front.  I didn’t have the mindset or form to participate, so I just rode up the climb at my pace, which was good enough.

I was mildly surprised to get to the top not that far back.  I didn’t fill my bottle or carry any food, knowing that there were multiple stops along the route.  But, no one was stopping at the food stop at the top of Deer Creek.

I wanted to ride along the coast with a group, so I just rode by it too.  I got in a small group descending, then rotated  a couple times and caught back up to a large chase group heading up Mullholland.   We started up this climb pretty quick too and guys started getting shelled.  I felt much better and we were pretty much climbing my pace.  I saw guys at the top of the road saying they would be feeding past the food stop.  I had a hard time believing that guys had people feeding them on a benefit ride.  But, the “race” was way up the road by then.  I could see a small group of guys way above us, minutes ahead.

I knew I was going to stop at the top and get some food and water.  When we got to the top of this climb, most of “my” group pulled over.  But, they all just grabbed something and bolted.  I ate some watermelon, got some cold water and headed off.  I figured I could get back to my group on the descent.  The problem is that I flatted on the descent.

That was really a godsend.  I wasn’t having that much fun riding with these psuedo-racers.  It was nice, of course, checking out my form a little, but that really wasn’t the reason I came to the ride.   I put in a tube and got going again.  The problem was that there really wasn’t anyone around to ride with.  The front group had gone so fast the first 50 miles that there were only a few stragglers staggered along the road.

I got down to the coast highway and there really wasn’t anyone there.  A couple guys rode up from behind and we headed down the coast towards Malibu.  Pretty soon, my guys were hammering.  There is a small, but sort of steep rise on the road, somewhere in Malibu and the guy pulling didn’t really slow much and shelled the three of us sitting on.  I sat up early, not willing to ride at race pace.

I rolled up to a stop light and there was a girl wearing a Canadian Nationals Team jersey stopped.  I said hi and she asked if I was on an organized ride.   I explained the ride and asked where she was riding.  She said she was on the Canadian Track team and was heading to a World Cup in Mexico on Tuesday.  I asked here what time they rode for 4K and I think she said 4:21.  That is pretty quick.  She said that she had to do another interval, so she put in her earbuds and took off.

I was at the Latigo Canyon turnoff anyway, so I stopped and got some more water, thinking I’d just wait for Sue and ride the rest of the ride with her.  But at the stop, I saw a friend of Sue’s, Bob, who was doing support on a moto, and he said I’d have to wait at least 45 minutes, so I took off.

Latigo has a Strava award segment on it for this ride.   So, I was just cruising up the climb, with a few guys blowing by me doing the Strava challenge.   I rolled up to Rich Meeker and told him that we still needed to have a conversation about his doping positive.

Just then, a big group comes up and it was “Lance’s” group.  I’d already said hi to Lance when we were rolling out.  There were a bunch of guys following Lance up the climb.   Rich dropped back and said something to Lance.  I was thinking, “oh great”.  But, Dave Letteri was riding with Lance, or maybe more accurate, Lance was riding with Dave.  Dave owes Fast Track Bicycles in Santa Barbara and has been doing the ride the last 5 years.  I‘ve known Dave probably since he was a junior and it’s always nice chatting with him.

I talked to Dave a bit, but we were going pretty fast up the climb.  About 2/3’rds the way up, Lance was sitting in 2nd position and pulled off and dropped back.  He asked Dave how far it was to the top.  He seemed to be struggling a little.  The guy pulling, slowed down a bunch and the whole group slowed.  I just kept going and rode to the top.   I pulled over at the food station at the top and the whole group stopped, even though I think I heard Lance say to keep going.

The group just stopped for a short time and took off.  I wasn’t planning on riding anymore with them.  At the stop, I spot Wayne Stetina, my friend from Shimano.  He was riding with Shawn Morelli, a good friend of his.  He introduced her to me as his adopted daughter.  Anyway, I didn’t know Shawn.  She is from Leavenworth, Kansas, which makes it so strange that I didn’t know her.  She is a really good rider, multiple time US National Para Cycling Champion.

I ended up riding the last hour and a half with Wayne and Shawn.  It was great.  She was climbing super good and Wayne was just Wayne.  We got a chance to catch up.  I asked about his brother Dale, that was hurt pretty badly last year in a cycling accident.  Wayne has been riding a tandem with Dale on some Road to Recovery Rides and Dale seems to be doing pretty great, considering.  It was a nice way to finish the ride.  Sue rolled about 15 minutes later, so I guess Bob was wrong.   She had a super good day, even though she was worried that she didn’t have enough miles.

So, the ride turned out great, once again.  I got to hang with some good friends, that I rarely see.  I really need to just come out and hang with Jimmy Mac some, ride some MTB trails with him and see the area more.

You’d think that this ride would be chaos, being nearly in Los Angeles, but it is so surprising that it is pretty much isolated with little traffic.  It is amazing how many guys turned out on Monday for this ride.

Jack Nosco has “made” this tribute for his brother into a celebration.  We’d all be very fortunate to have family like him. 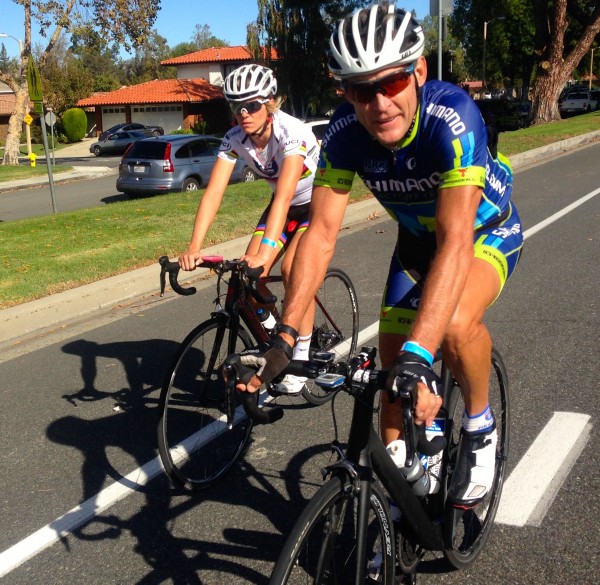 Wayne and Shawn towards the end of the ride. 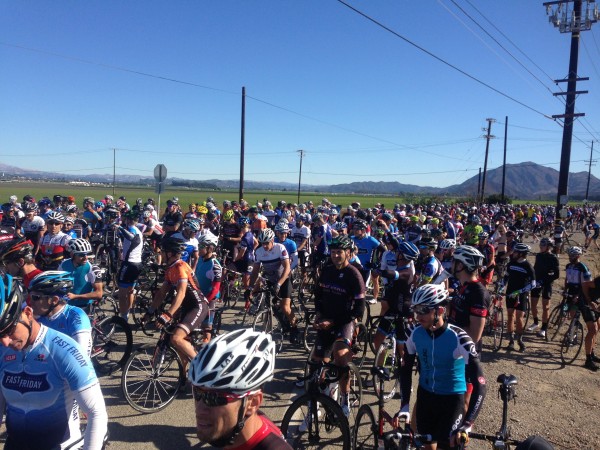 The group stopped at th memorial site at the start. 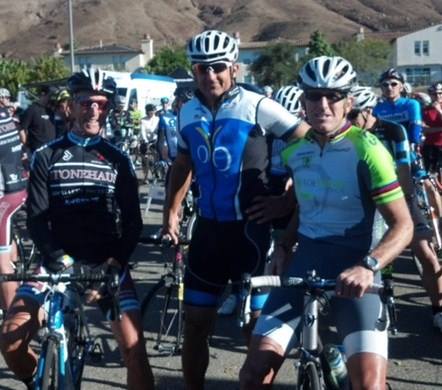 Roy and I before the ride. 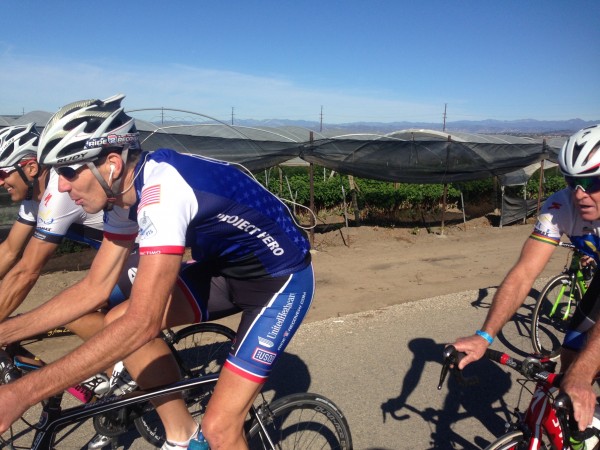 Roy, John Wordin and Thurlow (Rogers) behind heading out in the sidewind. 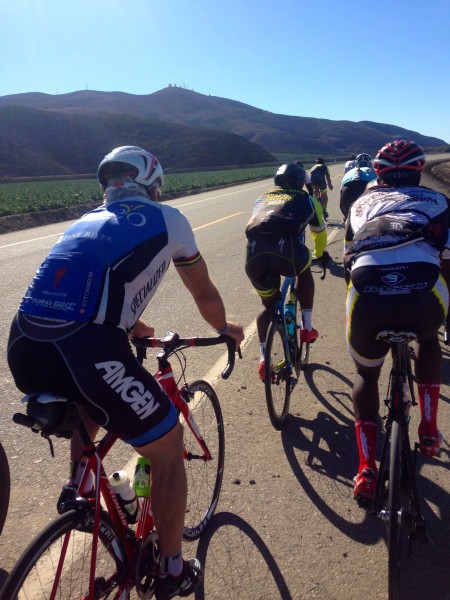 This is Thurlow on the left and Rahsaan Bahati on the right, when it started getting pretty quick early. 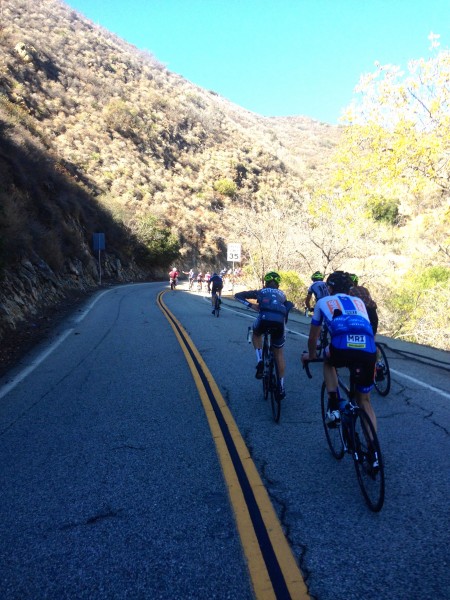 This is when I caught back on at the bottom of the Mullholland Climb. Jimmy Mac is on his motorcycle leap frogging us to shoot pictures. 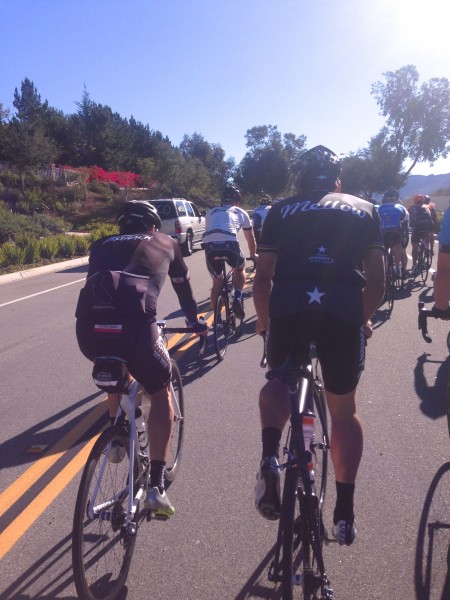 Lance was on the ride, but it was really a non issue. I’ll think about it a little and probably post about it later. 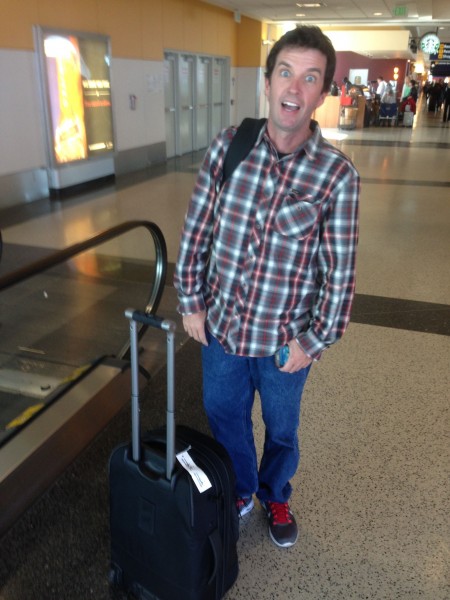 I ran into Matt Caron in the Oakland airport on the way up to Seattle.