I’m not a big fan of Chris Froome. I have written a couple posts about not liking Bradley Wiggins much. (And here.) (Or here.) I have never talked to Froome or really heard him say too much stupid stuff, but his actions speak louder than words sometimes.

Froome has been following in Bradley’s footsteps and has been training on Tenerife, a Spanish Island that he, Nibali and Contador all trained on this year before the Tour de France. Chris complained about lack of doping controls on Tenerife, which is admirable. I’ve written a couple times about how screwy it is for thes guys to be doing this, but, they just keep on doing it.

But Chris must not think that the Tenerife training, that the past 3 Tour de France winners have done, is good for the Tour of Spain, because he decided to fly over to the United States and train with, who, yes, Levi Leiphemer. (And no, he’s not racing either Utah or Colorado.)

Yep, I saw a photo on Facebook a few days ago showing Chris, broken arm and all, riding in Sonama County with Levi. Man, how about that? You’re the previous years Tour de France winner and a rider that speaks out against doping, and then, nearly while the Tour is still going on, you pack up your bags and fly 9 time zones away to ride with a confessed doping cyclist, that the rest of the sport won’t give a contract to after serving his suspension. What does that show to the racing public?

In this day and age of the sport, you need to walk the walk if you talk the talk. He’s not doing that. Okay, maybe he will never go to Tenerife again to train because of the lack of testing and general suspension that the island attracts. But going out of his way to train with Levi?

Even Levi admits here, that he shouldn’t be racing National level, or I assum,e World level events – “I actually agree with your sentiment and it wouldn’t make sense for me to show up to national level races and compete.” (If you haven’t read those comments, you should click the link and read some them. Good comments from Matt Cooke and Jamie Driscoll.) But it’s good form for last year’s Tour winner to be training with him? I think not.

If he, and all the other current GC winners of the Grand Tours have signed off on all this altitude training for 3 week races, plus he flies all they way over here to be jet lagged, why is he breaking the regiment and training in Northern California and not in Colorado? Either it is the correct preparation for a Grand Tour or it isn’t. And why is he flying nearly half way around the world and calling up Levi to take him out on a ride? Maybe he’s just not interested in the correct preparation for the Tour of Spainand doesn’t give a shit and is just going to explore the world some to train?

Okay, maybe he was just out riding and happened upon Levis. And he’s such a nice guy that he felt obligated to ride with him. If that is the case, then this whole post is utterly wrong. But, that is very, very unlikely. 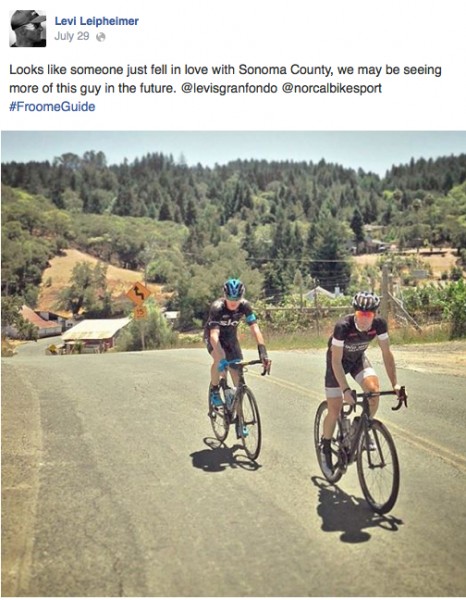 They kind of look surprised in the photo, huh?

38 thoughts on “Froome Skipping Tenerife to Train with Levi in California ???”