“Even with all the problems cycling has had with the American guy, it is still growing all the time. People love it and that is fantastic,” he told The Daily Mail. This is Bradley talking about how well the sport is doing now.

I don’t know Bradley. Really, I don’t want to know Bradley. That being said, he must be clueless, a dim wit and/or naive. He is taking the problems of the sport of cycling the last couple years and saying it was the deal of “the American guy”? Wow. He pretty much simplified it all down to a neat little package. I think he must have missed all the other dozens of riders, mostly European riders, that have come out recently and said that they cheated and doped. He must have missed the results of the French senate inquiry too.

And he must have missed all the constant questions he received last year at the Tour, and his team mate, Chris Froome was bombarded with this year, about how riddled the sport is with doping. I don’t think Lance’s name had much to do with the on going crisis now. Lance is yesterday’s news now.

I think it is so strange that here we have all the American team mates of Lance’s, over the years, confessing and serving at least some suspension, when the majority of every Tour team that Lance rode on was foreign riders. I don’t quite get why none of those guys have served any time outs? It seems weird and unfair.

Well, Bradley, maybe you should just kept living in your little bubble and not watch your team mates race the Tour de France. And then you can not congratulation your team mate, Chris Froome, for winning the Tour this year.

I hear that Chris Froome is a really nice guy. Nice enough to not bash Bradley publicly. Not so for his fiance, Michelle Cound. She had no problem publicly stating her opinion about Bradley. Seems that she and Bradley’s wife, Catherine got into a little cat fight on twitter.

Anyway, maybe modern communication just doesn’t get up to the top of the mountain in Tenerife or Bradley’s self imposed media fast denies him access to the current happenings of the sport. That would explain his lack of understanding of how giant and broad the public’s perception of the issues of doping in the sport are currently and how it isn’t just “the American guy” deal. 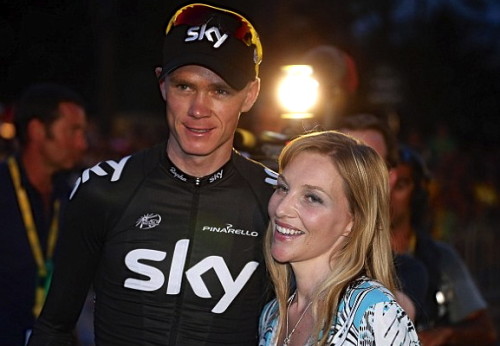 Chris’s public relations coordinator, which happens to be his fiance.