Yesterday was long. First I went and used my chainsaw and cleared the rest of the trees that I left when I ripped open my hand with the chainsaw. I figured that I wouldn’t be able to use it for a few weeks, so I’d better finish the job. It was already 90+ degrees by noon and I pretty much sweated through every piece of clothing I was wearing. I had hoped on riding to Kansas City, but by the time we had loaded the trailer and dumped it at the vegetation dump, it was nearly time to drive to Overland Park.

I got to the Dr. office barely on time. It was a plastic surgery center and man, did it look like something out of Housewives of Beverly Hills/Orange County or something. I have really never watched one of those shows, but I’d bet they have places like this in them. Very modern, pretty receptionists, espresso machine, blah, blah, blah. Anyway, they were all very nice, professional, and prompt, which pretty much is all I could hope for.

The doctor came in, messed a bit with my hand and then told me that the index finger has two tendons. And that by my movement, I only severed one. He said that he sometimes “steals” my severed tendon in surgeries that he needs an extra one. So, he told me that if he were in my place, that he would just leave it alone and let it all heal on its own. Sounded prefect to me. So, we drove back to Topeka just in time to make the group ride.

It was only in the 90’s riding, but 90% humidity too. I find when I’m not ready for heat, I tend to breathe more from my belly, well, above the diaphragm, and it makes me feel weird. That was the case yesterday. We rode mildly hard and towards the end, when we were going faster, I could ride steady state around 27/28, but any harder and I started panting like crazy. I do have another day to train for it, today. So, instead of my original plan of riding all week in the heat, I’m going to do one good ride in the heat. I’ll wait until noon and then got out for 4 hours or so. It is then going to cool off here after tomorrow. Boo.

So, when I got the clean bill of health, I entered road Nationals in Madison next weekend. The road race is closed with 200 riders entered. I think there are a couple spots for the 150 field limit in the criterium. The race predictor has me finishing 176th in the road race, but 16th in the criterium. Travis McCabe, from the Elbowz Team, is predicted to win both events. What pressure! Seriously, 200 guys riding around on the Blue Mound Loop is going to be huge. I did the race the first year they held The Tour of Americas Dairyland. The course is super hard and some of the roads are super narrow. Matt Busche, who was riding for ISCorp, schooled us pretty good that day. He was riding for Discovery a couple months later. I finished 7th I think. The finish climb is really hard, even after only 140km. Should be interesting. I have never gotten any real form this season yet, but I never know. I came back from the ride yesterday at 149 pounds, which is a decade record low, minus the stomach illness I had in January before Masters Cross Worlds. That doesn’t really count. I am actually in the mid 150’s adding the water back in, which is pretty light for me. I haven’t gotten sick yet, so far, so good.

The last few days I’ve been sort of in limbo, not really knowing what the next couple months would be like. Now I’m a little mentally exhausted. That is weird how that can happen. I’m going to head up to Dennis’ house in Cable after Madison. Trudi has to work Nationals for the BMC U-23 guys, then has a couple of days and has to fly out to Bend for Cascade. Then Utah, Colorado, Alberta, World Cups in Canada, and then done, I guess. Pretty busy summer for her.

Okay, guess I should get ready to lose 10+ pounds in water weight. I have this weird deal when I really sweat a ton, my ears clog up with water. Riding inside for a long time always does it. Riding outside when it is super muggy, plus hot, does it too. I must have a sweat gland or something behind my eardrum.

Weightwise, it really doesn’t matter how much I drink on days like today, there is no way to stop and consume enough liquid to keep up. I’m going to carry two big bottles and probably stop once, but that definitely won’t do it. There are lots of studies that show the benefits of training in the heat and also dehydration. Heat training increases blood plasma. Here’s a link to a general article on the benefits. I don’t really have enough time to do it properly, so I’m just going to go for a nice, long, easy ride in the middle of the day. Maybe I’ll get a little extra plasma, maybe not. 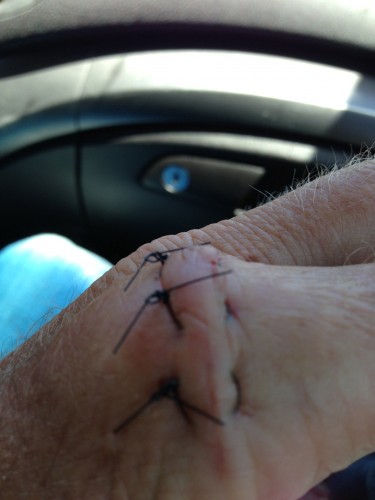 My hand is healing up pretty quickly. I’m supposed to leave the sutures in for two more weeks. That seems like a long time. It is over a joint though. 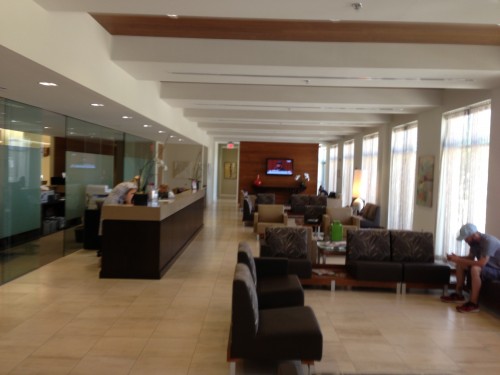 6 thoughts on “Lucked Out, Sort of”