The weekend and the bike show passed quickly. It snowed like crazy in Colorado on Saturday night/Sunday morning. The biggest snow of the year for a lot of the area. It wasn’t a foot most places, but it was pretty deep and wet everywhere I was. It really slowed down the attendance of the handmade bike show on Sunday.

We didn’t stay that long either. Vincent drove us over to the show in his AWD Subaru. It was snowing pretty good when we left and I was pretty sure my van was not moving when we got back. The interstate highways, 70 and 25 were hardly touched by plows mid morning. I thought that was amazing. I ran out of juice, as usually, early afternoon and went back to Vincent’s house. I wanted to get started up to the mountains before it got dark, but wanted to leave the road crews enough time to get most of the snow off the roads.

It worked out pretty good. It only took us an hour and a half to get up to Silverthorne, which was only 30 minutes more than usual.

Trudi has all her downhill ski stuff in the van and is going to ski all day today. They got a ton of new snow in Vail, I’m sure, so it will be pretty good. She told me last night on the dog walk that she was a little nervous about getting hurt. I thought that was nuts, we ski (nordic) all the time, on pretty technical trails. But she said that she has seen so many hurt people the last 10 days that it got her thinking. I have to admit, if you spend most of everyday at the hospital in Vail, you see a lot of people wearing ski boots and helmets, sitting in wheel chair, waiting for an MRI, X-ray or something. I heard that last Friday, they took 48 people off the slopes on the back board/sled things. That isn’t even counting the people that skied down and got themselves to the hospital. It is a never ending supply of patients for those guys. Anyway, Trudi will be fine, she’s been skiing since she was very young. The lift tickets are $119, so I think she is only planning on skiing one day. That seems extremely high, but I’ve stated it here before, I’m a bit out of touch of how much normal everyday things in life cost.

I have my two week follow-up with my shoulder surgeon on Thursday. Then I’ll know a lot more about when I can start doing more normal everyday life things. I have to admit I am very surprised how slowly this has gone, even though I’ve been told by many people, who’s opinions I respect, that this is a very slow healing injury/process.

The bike show was a good distraction, even though I was low energy all weekend. The guys displaying at this show have a ton of passion for their crafts. The enthusiasm is contagious. The way the cost of all the production, high end bikes have gotten, if I were buying bike, I would have to buy one of these small production, custom/nearly custom bikes. The craftsmanship and care that these guys put into each and every one of their frames is amazing. You would think that there has to be some premium attached to this, but when you really look at the costs, it isn’t all that much difference.

I’m going to keep the list of exhibitors of this show in my van this year, and whenever I go to a city that one of them builds, I’m going to make it a point to stop by to check it out. Maybe even go for a ride. Nearly everyone at this show could easily be a friend of mine in the future.

Okay, my arm has been feeling a little weird the last few days, so I’m eager to talk to someone this morning to put my mind at ease. I’m really looking forward to Thursday. I’m not sure, unless they do another MRI down the road, how they are going to know that this whole thing went as planned. And I don’t think another MRI is in the plans at this point. Maybe it takes a lot bigger hit, twist, or whatever to pull these reattached tendons off the bone, I don’t really know.

Changing the subject, once again, a big congratulations to Brett Crosby and Joseph Schmalz for winning this past weekend in Walburg and Pace Bend respectively, down outside of Austin. I really enjoy those races and they are pretty competitive. Good start to the season from the Elbowz Racing Team.

Okay, below are a bunch of pictures from the last couple days. 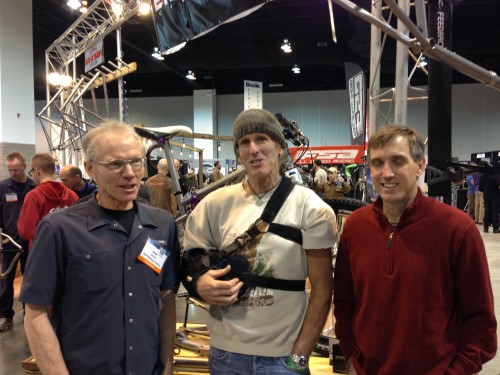 This is Kent Eriksen, Vincent and I in front of the Eriksen Cycles booth. 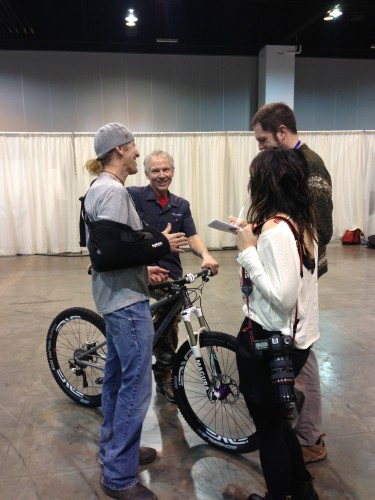 Kent and I doing an interview after they awarded Kent the Best Titanium Construction Award from the show. 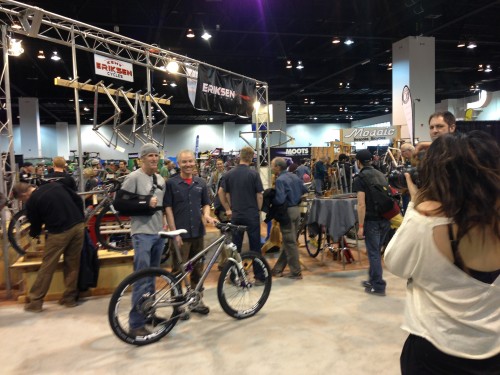 And a photo shoot after the interview. 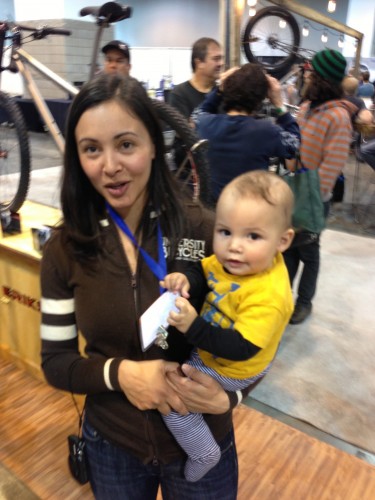 This is Elaine and Oscar, Andy Hampsten’s wife and baby. 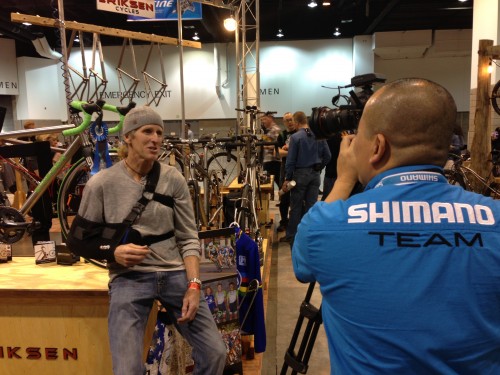 Doing an interview about the Di2 shifting I used for cross Nationals and Worlds. 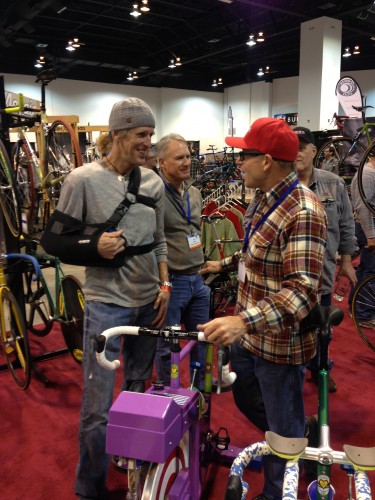 Talking to Rich Gangl. Rich and I got way back, early 80’s maybe. He builds some beautiful stuff. 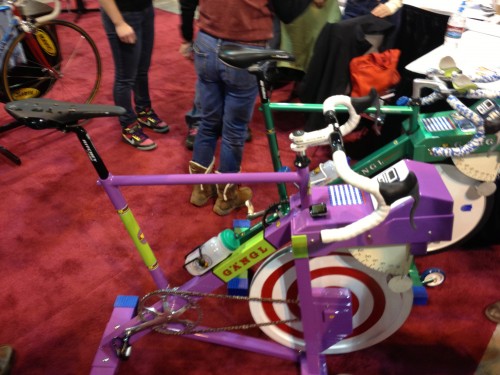 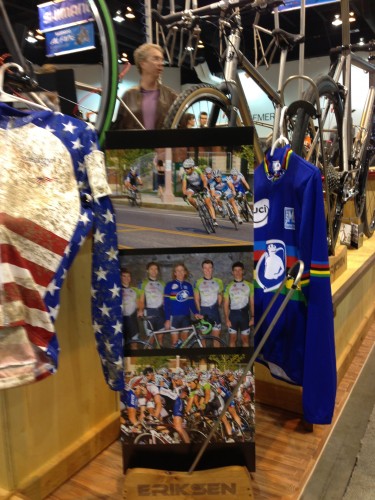 The little Tradewind Energy corner of the Eriksen booth. 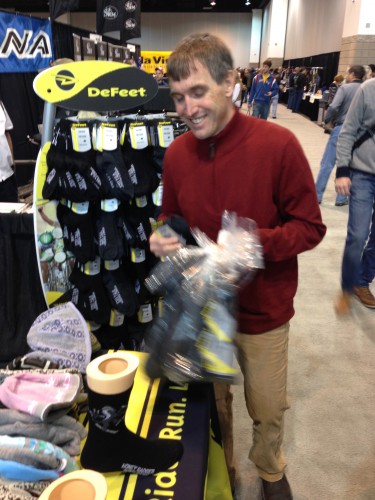 Vincent bought 29 pair of Defeet wool socks right when we got to the show. His rational is that you don’t have to spend any time matching up the pairs if all your socks are the same. Hard to argue with that. 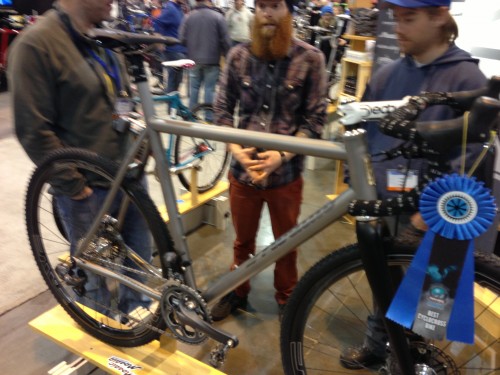 This was the best cross bike of the show from Mosaic Cycles. 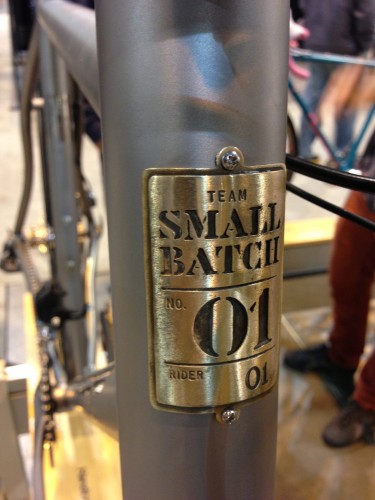 I liked the headbadge on the bike. 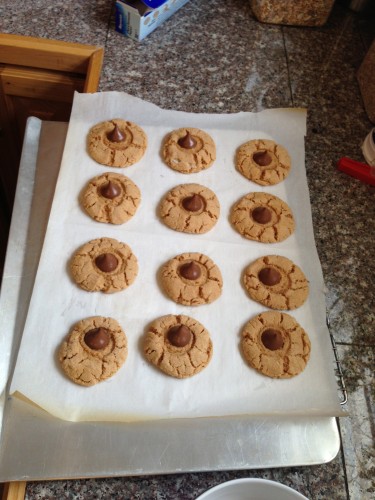 Lisa, Vincent’s wife, made us cookies after lunch yesterday. 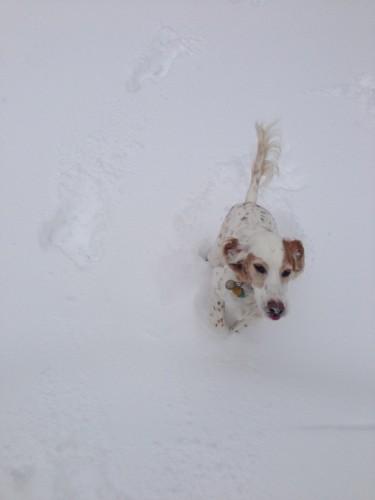 Bromont running around in Vincent’s backyard before we drove up to the mountains. It was nearly chest deep for him. 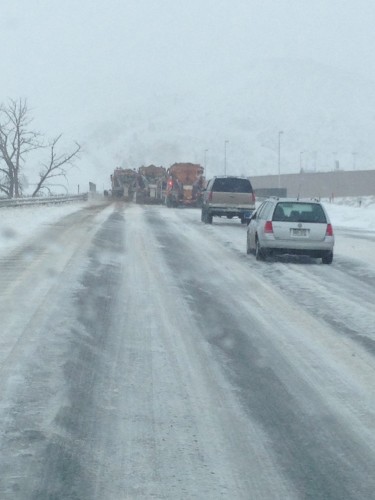 Just at Floyd Hill, I got stuck behind three plows moving in tandem. 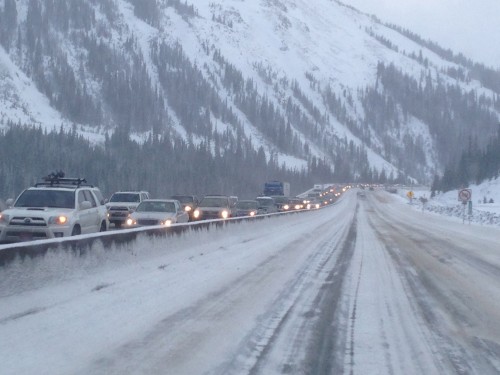 The traffic up by the Eisenhower tunnel was not moving coming down on Sunday night. 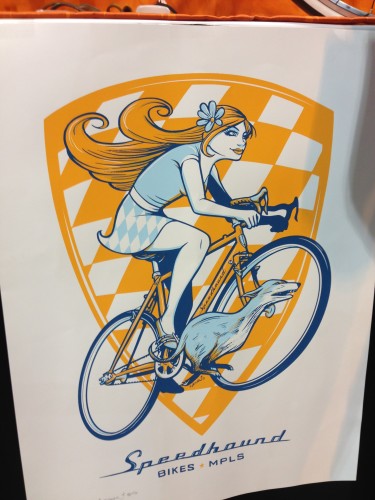 I liked the logo for Speedhound Bicycles. Nothing wrong with a girl riding a bike with a fit looking dog. 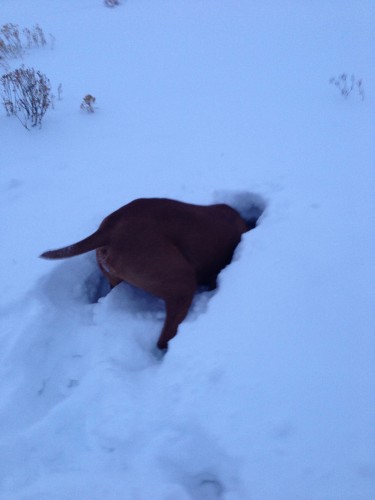 Jack made the cut and came back up to Silverthorne with us. Not sure what he was going for here.

5 thoughts on “It’s All Starting to Melt Together”