I was riding by a newly tilled field yesterday and thought, like I always do when I see newly plowed ground, of a really nice life experience.

It was back when I was 19 and Kris and I were driving our VW bus back from California. I think it must of been in the fall, but don’t hold me to that. Anyway, we were doing the diagonal from Tucumcari New Mexico to Wichita Kansas on Hwy 54. We were past Texas/Oklahoma and just into Kansas when, clank, boom, or whatever, the engine threw a rod, #3 to be exact, a well known noise to me.

Highway 54, only 2 lane, was pretty much a truck route to save a bunch of distance up to Kansas City. There wasn’t a shoulder and we knew the bus was dead. So, before it even had coasted to a stop, we both got out and started pushing to keep the momentum. Every so often a truck would pass us and I’d just hold onto the driver’s side door to get the sail effect and some free distance. We did this for about a mile until we came up to a farm yard.

We pushed the bus into the driveway and into the grass. I went up and knocked on the door and Ray Skeen, the farmer that owed the house and surrounding property, answered. I explained our situation and asked if we could use a phone to try to get a hold of a friend that might come down and pick us up. He was super nice and said sure. The only problem was we didn’t know too many people that owned cars, or at least cars that could drive 300 miles to get us.

The Skeens were great. Before I even made a call, they suggested that they should drive us to Wichita and we should meet whoever was going to pick us up there, split the drive half way. I didn’t really know what to say. They were volunteering to drop what they were doing and drive us 150 miles, with our bikes and stuff. They pretty much wouldn’t take no for an answer. I knew some people we could stay with in Wichita if I couldn’t get a hold of anyone from Topeka.

I finally got a hold of a friend, Fritz Menninger, and Fritz said he could come. The Skeens told us a place to meet Fritz and that was it, we piled into their car and set off. I don’t remember Mrs. Skeen’s first name, but she said something to Mr. Skeen, Ray, about whether he had fixed the alternator of the car. He said no. She was questioning how they were going to get back, since it was going to be dark when they would be driving back. He said they would just stop a couple times and charge it up. No stress at all.

It worked like clockwork. We showed up at the meeting point right when Fritz did. We unloaded, thanked the Skeens and said we would come back and get our bus when we could. It was so strange, because we got back to Topeka nearly faster than we would have if we’d just stayed in the bus and not broken down.

Fast forward over a month. My father, who lived in Kansas City, drives over one evening to visit us. We lived with his mother, my grandmother. He asks us where the bus is and we tell him it blew up down in Bloom Kansas a month earlier. (You can tell how much were in contact with him.) I tell him that we had another engine for the bus, but didn’t have a way to get down there. He casually says that he’ll take us, right then. So, we call up the Skeens and ask them if it’s okay to come down. I tell them we’re not going to get there until after midnight, so don’t be alarmed if they hear anyone outside. I ask Ray if he has an extension cord, we have a work light. He says sure.

Anyway, Kris and I threw the spare engine, plus all the tools we need into the trunk of my dad’s Ford Granada, and we drove the 300 miles to Bloom. It is pretty late by the time we get there, well after midnight. Ray had hooked up an elaborate light setup, with some tarps. It was so bright it was nearly like daylight. So, we unloaded and got to work.

I think my dad stayed there until we assured him that we were good. It doesn’t take much to remove and reinstall a VW engine, but it was cold. And we probably had to change a few parts, maybe the carburetor, distributor, etc. I don’t quite remember. Anyway, it was close to sunrise by the time we got the bus started.

That was just about when Ray came out to say good morning. He said that his wife was cooking breakfast and it would be ready in 15 minutes. It, once again, was perfect timing. We put the dead engine into the bus, along with our tools and headed in.

Man, did it smell good. Eggs and bacon. There is nothing like the smell of fresh bacon in the morning. The only problem was that we were both vegetarians. We had been so for over 5 years. But, we gave each other the look like, hey, she cooked this for us, we have to eat it.

Sitting down at the table, it looked like she had cooked for 10. Easily a dozen and a half eggs and two pounds of bacon, plus a load of bread made into toast. We were pretty hungry and of that age, so we ate pretty much everything she had made.

Then Ray gave us a tour of his house and land. I don’t remember much about his house, other than it had a full basement, but he’d never finished the stairs, so you needed a ladder to get down. In the basement, he had his hobby, which was building gliders. Like big gliders, over 6 foot wingspans and bigger.

He went on to explain that he didn’t plant winter wheat in the field behind his house because that is where he flew his planes. Every time it snowed, he would plow the field to expose the new black dirt, to create thermals so he could fly his gliders over the field.

I was into the whole thing. All of it. It seemed so surreal thinking about this guy living out in Bloom Kansas, building gliders and then not farming so he could fly them. I’m not sure why I clicked so well with Ray. Maybe it was because of his interest in nearly everything in life. He seemed to be truly interested in my brother and I and what we were doing and trying to accomplish. He was a farmer yet a renaissance man.

Anyway, we got going mid morning. I think we had to stop in Wichita to mess with the timing on the VW, but got home okay. I sent Ray and his wife a few letters the next couple years. The first time I went to Europe on the National Team, I sent him a letter from Italy. I had the full intention of going back down to visit them and fly gliders with him, but, I never did. I don’t have a lot of regrets in life, but that is one of them.

There are lots and lots of things that initially drew me into the lifestyle of the sport of racing bicycles. I’m not sure that the early life experiences, such as this, weren’t as big a part of the reason it stuck as the competitive aspect of it. It really doesn’t matter, they go hand in hand.

So, every time I ride past a newly plowed field, especially in the winter, I think of Ray and wish I would have made it back down his way a few more times. I surely would have learned a thing or two. 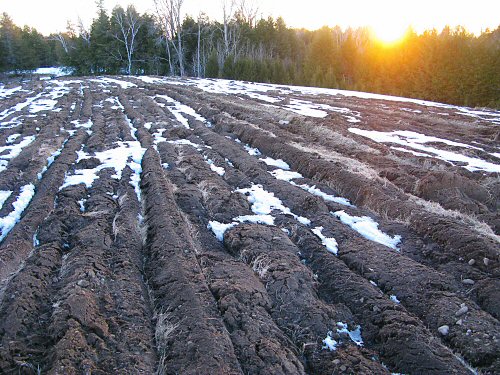