I got an email from a guy in Lawrence saying that he was selling a Schwinn Paramount that was mine from back in the 80’s. I emailed him back and asked him a little about the bike and told him I’d come down and look at it. So, Friday night we drove down to Lawrence to have dinner, but we stopped by to see the bike before. When I got there, I was pretty sure it was a bike that got stolen from my garage in 1987. Here’s the story.

One morning, when I was riding for the Schwinn/Icy Hot Team, I woke up and went out to the front yard to get the newspaper. I was looking at the yard and saw a pair of my race wheels laying in the grass. I thought, “That is weird, I wonder how my wheels got in the yard?” Then I looked and saw the garage door was open some. I went into the garage and my bike was gone. I went back outside and saw that Trudi’s bike was laying in the yard with the wheels.

This was early in the week, so I called our team director, Mike Farrell, and told him I needed a bike. Mike was pretty cool, but must of given me some shit. He said he’d work on it. So, I went downstairs and got a Pinarello that I rode the year before on the Levi’s team. Mike called me the next day and said that they were doing a dealer thing at Waterford, where they built the Paramount frames, and said he was sending me a plane ticket to fly up. I would do the dealer meeting and they would build me a new frame and we’d put the parts on it. So, I flew up to Chicago on Friday night, our mechanic, George Noyes picked me up, we went out for sushi and then the next day I went up to Waterford. I’d never been to the Waterford before, so I was pretty into it.

Sunday, I called home to say when I’d be flying back and Trudi told me that the guys had come back on Friday night and stolen both my Pinarellos out of the garage, plus her bike again, only to be rejected a second time.

I came back with my new bike and called the bike shops in Topeka, Lawrence and Kansas City. A couple weeks later, someone from the Schwinn shop in Topeka said a guy came in trying to sell my Paramount, but when they offered him $500, the guy kind of freaked out and ran out. I don’t think he thought it was worth so much.

Then, the next week, Rick’s Bike Shop in Lawrence called and said that they had two guys and my Pinarellos, but they were having a hard time getting anyone from the Topeka Police Dept. to verify they were stolen. I called the detective I called when they were originally stolen and he really was uninterested. That was until I told him that the Lawrence Police were holding a couple guys at a bike shop in Lawrence, with the bikes.

I went down to Lawrence a couple days later and got the Pinarellos. But, no Paramount. Flash forward a couple more months, a friend calls and says that my Schwinn is in a pawn shop in East Topeka. I go down there and it is definitely my bike. I call the detective once more and he reluctantly meets me there. The only problem is that I don’t know the serial number. No one at Schwinn knew the serial number, but my name was painted on the chain stay. The problem here was that someone had taken black spray paint and sprayed over the stays. I had a picture of me on the Schwinn catalog riding the bike, with me.

The detective was a prick and said that he had no way to identify the bike. I said there were only 16 of the bikes in the world and I knew where the other 15 were and could document it. That didn’t work. It seemed like the pawn shop guy and police were somehow in some kind of relationship. Anyway, no bike. I offered the pawn shop guy $1000 and he said no.

I heard later it was in a pawn shop in Lawrence, but I never saw it there and it just disappeared. That was until last Friday, when I got the email. So, here it is 26 years later and I have the bike back in my garage. I bought the bike for $300 from the guy. It didn’t have many of the same components on it and was pretty beat up. Someone had spent some time on removing the black spray paint from the stays, but there is still a little down by the bottom bracket and up on the seat lug.

I really have no use for the bike now, as I have a brand new Wheaties/Schwinn Paramount in my basement, but there is no way that I was going to pass up this chance to get it back. Maybe I’ll just take it back to Joe Bell and get it redone. He was the original painter of all our team bikes, no decals for us. I’m sure he would make it perfect. I think I’ll do just that. 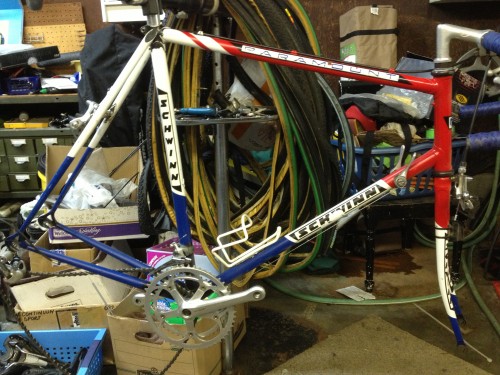 Here it is, all beat up, with a mishmash of parts. 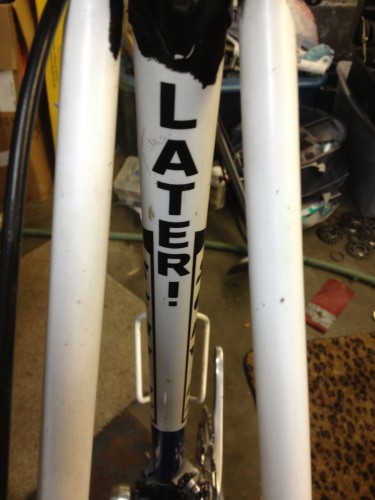 I’m not sure how this came about, but I’m pretty sure this is how the frame came. 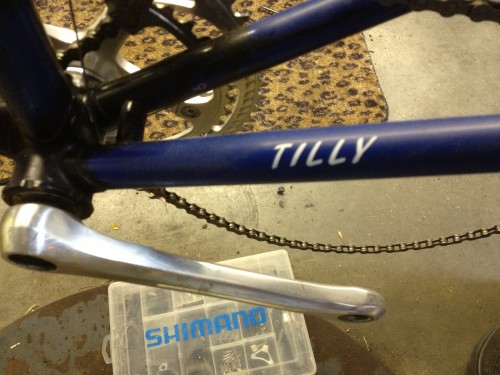 Proof it was my bike. 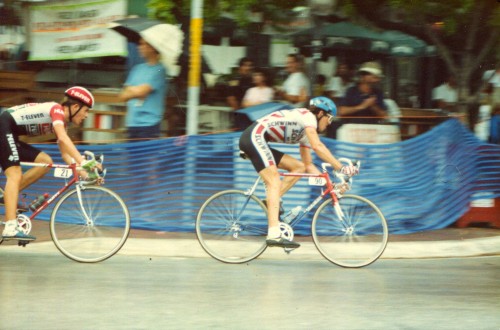 Early season photo of racing on the frame. 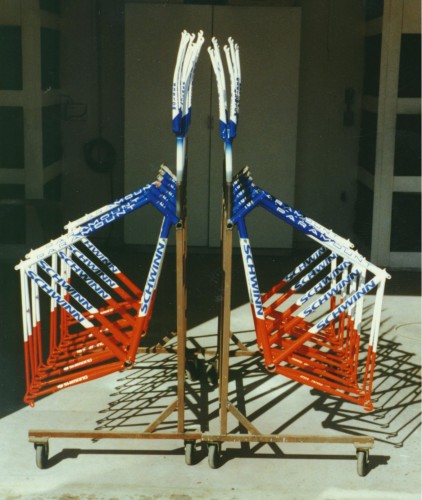 This is from Joe Bell’s website. These are our frames from the next season. I can read my name on the one on the right. That is pretty weird.