I got an email from someone that reads this, a couple weeks ago, inquiring about getting a frame for his son. They were doing a project and were looking for a frame that had some horizontal dropouts that would work for a fixed gear. They were from the Minneapolis area. Anyway, I went down the basement and started looking for a frame.

The problem was that most of the steel frames that would have horizontal dropouts, had cracked or been crashed. I have the original Colnago I bought when I was a junior and one of my Wheaties/Schwinn Paramount bikes, but those are keepers. The only bike that seemed to fit the bill was an old Motobécane Gran Record frame. It is steel, 531, and has Campy dropouts. It was in the basement for when friends come from out of town and don’t have bikes, we can slap some wheels on it and it sort of worked.

I just threw the frame and misc. parts into the back of my van, but sort of forgot to tell Scott, the father who had emailed me, that I had it. I kind of panicked a little upon leaving Dennis’, realizing that I didn’t make plans to drop off the frame. I actually hadn’t even told Scott I had it.

I had Hollywood’s number in Minneapolis and have a jersey for him, so I was thinking I could just call Hollywood and drop the frame and jersey off with him, but it was a little out of the way and it was Sunday, so he wouldn’t be at his shop normally. Anyway, I emailed Scott and he said he would be around all after noon and just lived a bit south of St. Paul, which we drive right through.

So, we made arrangements to meet up at the Byerly’s grocery store on Yankee Doodle. We usually stop there both directions on the drive from Topeka to Cable. Good food, expensive though, and a Caribou Coffeeshop inside.

When I talked to Scott and told him I was there, he said something like he’s really looking forward to meeting me. I thought, “great, should have left the frame with Hollywood.”

Boy, would that of been a mistake. Scott and his son Charlie were already at Byerly’s. They came walking over to the van when I was letting Bromont out to pee. They turned out to be the nicest guys.

The frame had a few parts, cranks, brake calipers, an original Avocet and Cinelli bars and stem. I told him just to take it all, use what he wanted and keep the rest. They told me the story of collecting the parts and that they were stoked to get a frame to build. Just about a week later now, I just got a photo from Scott of the completed bike. Pretty quick turn around.

Anyway, after I gave Charlie the frame, Scott told me he had to go back to his car for something. He came back with a gift. He said that his father had passed away recently and that he had gotten this tool from him. He and Charlie talked about something that they thought I might like and they came up with this. He knew, from my blog, that I used tools a lot, and said that he would feel “honored” if I would use this one. It was very thoughtful and moving.

You know, cycling is a pretty great sport. The speed, technical skills, mechanical aspects and most of all, the people involved. It is a certain type of person that understands the sport for its true beauty. But, it’s the ancillary interactions, such as this, that give me a ton of pleasure. Knowing I’m somehow tied to a group of people that understand and think somewhat like me, even though I’ve never met them before. I am so glad I got to meet these two.

Charlie and I finished assembling the Motobecane today. I turned out nice and Charlie is pumped to ride it for real,(I did turn him loose around the neighborhood with it, but no real riding for about 10 more days). We ended up using the bottom bracket and one of the Shimano 600 calipers that were on the frame. I had another set of 600 calipers with a longer reach that I needed to use on the rear. We had loads of loads of vintage parts so the build looks like this

Comes in at about 20.5 lbs and has that old-school steel frame smooth ride

More important than the bike itself is the lesson in generosity and perseverance that Charlie & I learned from the experience. There were times that it seemed that we’d never get the necessary parts together on our limited budget, or get everything together in time to get some miles on before he goes back to school in September. It was important to both of us that the project bike end up being something with style and flair, a bike that simply could not be bought at a shop. We are both grateful and humbled by your response to my shot in the dark email last month.

Keep on riding and good luck with your shoulder. If you get to the Twin Cities anytime get in touch and I’ll cook you a great meal and maybe go for a ride!

And here’s Charlie’s bike built up. 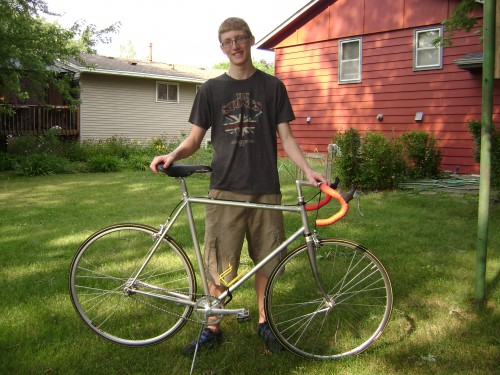 Charlie and his bike. 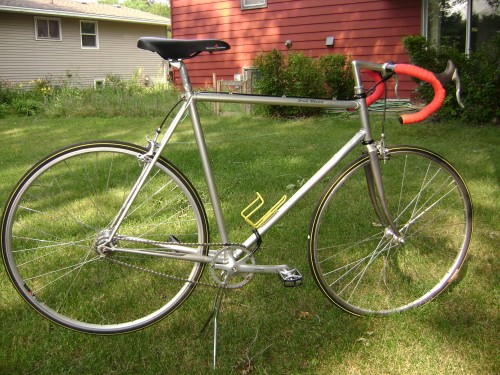 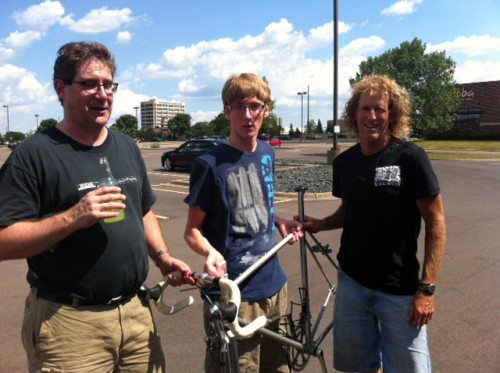 The hand off in the Byerly’s parking lot. 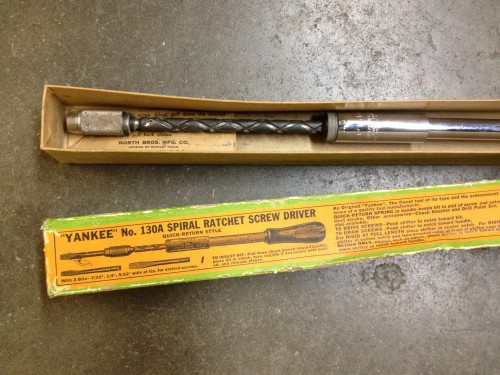 The tool, a Yankee, ratching screw driver, NOS, in the box. I got the better end of the deal for sure.