I read this article at the Guardian that Bradley Wiggins wrote. A lot of the statements here are probably the answers he should have given when he went into his tirade about the people asking him questions about doping.

“If I doped I would potentially stand to lose everything. It’s a long list. My reputation, my livelihood, my marriage, my family, my house. Everything I have achieved, my Olympic medals, my world titles, the CBE I was given,” he wrote on Friday. “I would have to take my children to the school gates in a small Lancashire village with everyone looking at me, knowing I had cheated, knowing I had, perhaps, won the Tour de France, but then been caught.”

“The insinuations make me angry, because I thought people would look back into my history, the things I’ve said in the past, such as at the start of the 2006 Tour when I turned up for a first go at the race and Operación Puerto kicked off, what I said when Floyd Landis went positive, and what I said when I was chucked out with Cofidis after Cristian Moreni tested positive in 2007.”

“That is not something I wish to live with. Doping would simply be not worth it. This is only sport we are talking about. Sport does not mean more to me than all those other things I have. Winning the Tour de France at any cost is not worth the possibility of losing all that.

“I am not willing to risk all those things I’ve got in my life. I do it because I love it. I don’t do it for a power trip: at the end of the day, I’m a shy bloke looking forward to taking my son to summer rugby camp after the Tour, where he could maybe bump into his hero, Sam Tomkins. That’s what’s keeping me going here. What I love is doing my best and working hard. If I felt I had to take drugs, I would rather stop tomorrow, go and ride club 10-mile time trials, ride to the cafe on Sundays, and work in Tesco stacking shelves.”

“it’s less at the forefront of my mind, because I’m no longer getting beaten by people who then go on and test positive or whatever.”

And then I pretty much think this is total bullshit –

“When I look back, we now have an idea of what was going on in the sport back then, and it was a different era.”

That last statement doesn’t even make any sense. Different era? Back then? What is he talking about. An era in sports history is really a long time, not a year or two or three. Does Bradley count eras in months? If this Lance thing goes south on Lance, then since 1996, we have exactly 2 Tour de France winners that haven’t turned up positive sometime. Even Miguel Indurain, who won from 91-95 skirted some testing issues. But, recently, 2 out of the last 4 Tour de France winners, the guys that stood on the top step of the podium in Paris, spanning a 6 year time period, have had to sit out 2 years for doping infractions. One of those “champions” is still not able to race bicycles. And he calls this a different era, all in the past and not an issue because he can beat everyone now. Huh.

In the last 5 years, he’s been on a team that was removed from the Tour for a doping violations and he says it doesn’t concern him so much because he beats everyone now. Now that Bradley Wiggins has the biggest voice ever, he decides it’s not the time to use it. Wow, that seems pretty uncharacteristic to me, considering how vocal he has historically been on the subject. And mildly selfish. It seems like if you use the rational that he uses above, and realize that he has much, much more to lose now, than 5 years ago, he would be more adamant and vocal when asked questions about doping in the sport, not less.

Anyway, I do like the article. It’s too bad that it has to be addressed so constantly, but that is the way of our sport.

Anyone notice Cadel finishing 4th in the field sprint, 9th overall on the stage yesterday. I like that. 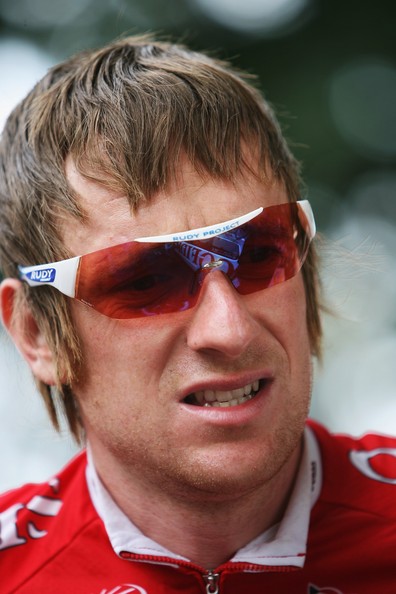 Bradley, back when he was fat, had a chip on his shoulder from getting beaten by drug cheats and couldn’t climb worth a shit. (July 22, 2007 – Source: Bryn Lennon/Getty Images Sport)