A Dutch newspaper has reported that the 4 guys that didn’t “want to” ride the Olympics, are now going to be suspended for 6 months after the Vuelta. The four guys are George Hincapie, Levi Leipheimer, Christian Vande Velde, Dave Zabriskie, plus Jonathan Vaughters. Here’s the article at Cyclingnews.com.

Nearly all the riders aren’t talking to the media about the report. Jonathan Vaughters called the reported ban “completely untrue.” I wonder if that is going to come back and bite him later on down the road? I guess since 3 of the 5 guys are now on the Garmin Team, and he’s the big boss, he needs to try to get through the Tour before it all goes down. He did reissue his current team’s stance on doping. Thanks Jonathan, that is what we want to know.

Here’s Levi’s quote from Cyclingnews – Quizzed whether he had made any kind of deal with USADA in return for a six-month suspension, as has been alleged in De Telegraaf, Leipheimer said: “Again, I can’t say anything. I’m not going to comment. Beyond that I’m here in the Tour with Quick Step and that’s all I can say.” This response pretty much confirms something is up. At least Levi, although sounding pretty stupid, isn’t willing to lie at this point.

I can’t believe, watching the Tour coverage right now, how Paul Sherwin is suggesting liable and that these fabricated stories always come up during the Tour. Both Paul and Phil have been towing the party line for way too many years. They probably should just let the facts sort themselves out.

Anyway, it’s going to get way more convoluted in the days and weeks ahead. Maybe Lance and Johan could just clear this up themselves. I very much doubt they will. 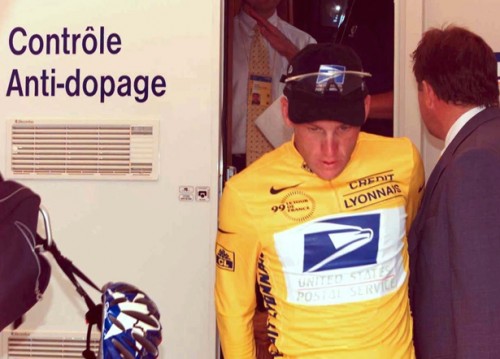 The most tested athlete in sports, Lance. Guess that might not be enough?

34 thoughts on “5 Testifying against Lance?”