It’s 2:30 am and I’m still going. I think when you do a super hard effort, late in the day, it is pretty hard for your metabolism to slow down enough to sleep. At least that is my experience.

Anyway, yesterday was the circuit race on the KU campus at the Tour of Lawrence. The race is only 56 miles, but it is a really hard course. Throw in triple digit temperatures at the start and it makes for pretty tough racin’ conditions. The race went alright for me, not so great for the TradeWind Team. I finally felt okay in hot conditions. I don’t have any idea what was different yesterday than the prior week. I didn’t feel stellar, but okay is enough right now, baby steps.

There were about 60 + guys lining up for the Pro 1/2 race. Not a huge field, but enough good guys to make for a very interesting race, from my perspective. The course is around 4 miles and is more like a criterium than a road race. Lots of fast, technical corners at the bottom of descents. I had a 51 mph max speed yesterday, which is pretty quick considering how short the descents are.

Everyone was worried about the heat. I think the saving grace of the day was that a thin cloud cover rolled in just about when the race started, so the sun wasn’t just blaring down on us. The first lap was the fastest lap. Lots of attacks and animation. Our plan was to try to get Brian into a small break. It was obvious that after a break formed, there would be no one left to chase. The course is too technical and over half the field is getting the slinky effect, so they are going so much harder than the front that they would be toast in an hour.

I got into a break of 4 somewhere on the 3rd lap out of 14. We had the proper mix with Nick Coil from Mercy, Matt Ankeny, Tulsa Tough, Chris Winn, Horizon/Panache and me. No one was drilling it. I was just out there so Brian could sit for the first 7 laps. Eventually, most of the good riders in the race blew the field apart. Sean Sullivan and Joseph, Elbowz, Brad Huff, Jelly Belly, Josh Yaton, another Horizon guy, Colton Jarisch, Mercy and Brian came up to us after about an hour.

I tried to stay aggressive, riding a lap off the front with Nick and then another one with Sean Sullivan. I felt just good enough that I could go steady hard, but not at fast race form.

It was obvious, at least to me, that Joseph was going the best. I was trying to mark Sean, but that didn’t really work. Eventutally, with 3 laps to go, Sean disappeared up the road alone. We all messed around until the last lap. Brad Huff was doing his normal Brad Huff strange moves. Strange enough that they are very unexpected. He would attack going downhill into a corner, uphill spinning 150 rpm’s, anywhere. He got a gap with a little less than half a lap to go and then Brian bridged across to him on the next to the last climb. I just sat up then. I thought it was done. Brian would pull Brad to the finish and that would be the podium. It wasn’t perfect, but it was the best we could hope for.

Little did I know that Joseph was just playing around. He caught the Brian and Brad, right before the final climb up to the finish. Actually nearly the whole break regrouped, minus Nick and me. Joseph then dispatched of them quickly for a 1-2 finish for Elbowz. I’m not really sure how the rest played out, but Brian ended up 6th. I kind of wish I wouldn’t have sat up now, but I was starting to cramp and didn’t really want to destroy my legs to finish 5 or 6th. As it turned out, I could have realistically been going for 3rd. There is no way I could have stayed with Joseph on the last steep pitch up to the finish.

The rumor has it that Joseph has a guest ride on the Bissell Pro Team for Utah and the Tour of Colorado. All I can say is, it is about time. The guy has been riding great, on & off, mainly on, for the past two seasons. He deserves to be participating in some of these Pro only invitational races. Too bad they are both at altitude, but you can’t be choosy in these situations.

Anyway, like I said, I felt better. My shoulder was torqued after the race, but that is business as usual now. We’ll see how it goes later today for the criterium downtown. It isn’t until 5:30 again, so it is going to be hot at the start and hopefully cool off a little during the race.

This race is a blast. Super good courses, good prize money and not dominated by any one group of riders. Just bike racing. I’ve been painting all mornings and after the races. We’re getting new carpet on Monday morning in a couple rooms, plus the hallway, so it is always best to paint when it doesn’t matter if you splatter a bunch. It wasn’t the best timing, but I don’t seem to be too much worse for wear because of the extra work.

It’s too bad Tony Martin flatted yesterday. I would have liked to see his time. He is going to be hard to beat at the Olympic games I believe. My stage pick at the Tour is Peter Sagan today, since the finish is uphill for 2 km. I don’t care that Cav has lost all those kilos of baby fat, he still isn’t going to like to sprint uphill. I hope he proves me wrong.

If you click any of the photos twice, actually once, then wait and then click again, they enlarge. 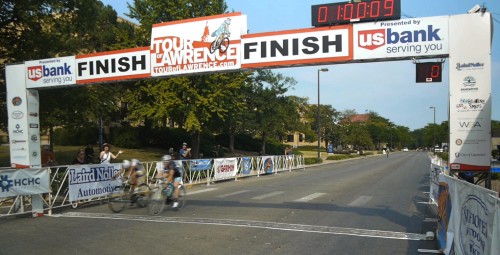 This was the finish of the day. Catherine just didn’t quit get by Emile Flanigan at the line. Luckily there is a redo today on Mass. St. 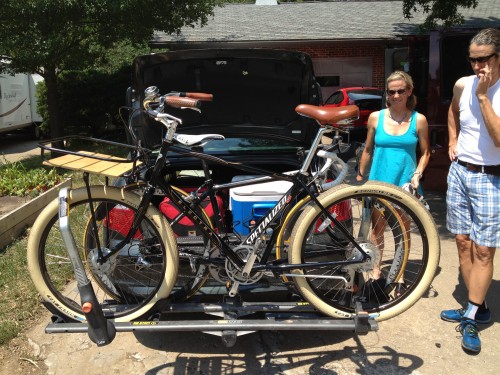 The Walberg’s car in my driveway before heading to the race. Quite a mixture of bikes. 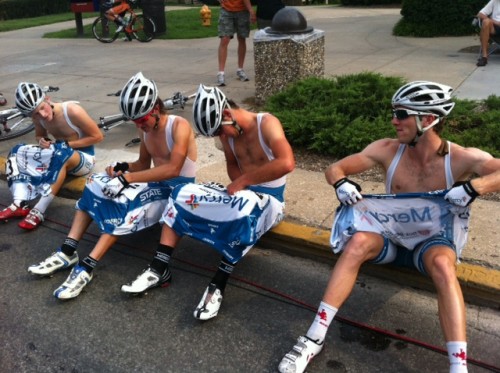 Repinning numbers, what a hassle. 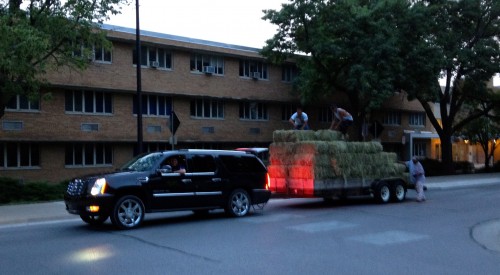 We use Cadillac Escalades to move hay bales around here in Kansas.