It seems that the USADA review board recommended unanimously for USADA to move forward with the charges against Lance Armstrong and Company. I think the chances are maybe only 70% that Lance will even defend himself in this hearing. I’m not sure about the others. And I’ll bet you just about anything that Lance will not ask for a public trial. We saw how much good that did for Floyd bringing the public into the mix. I hope this thing doesn’t drag on forever. It makes the process seem more suspect than it already is.

The Tour starts today, obviously. You can go to Cyclingfans.com and watch it live. I think the coverage begins at about 7:15 central time and the last 20 go off around 10 am CST. I’m picking Tony Martin for the win of the prologue today. I know he’s not a short TT specialist, but when you got go nearly 32 mph for 40.68 km like he did at his National Championships a couple weeks ago, then he should be able to get up to that speed for a mere 6.4 km. I hate picking the favorites and I never pick good, so don’t go with me on this. Pick Wiggins or Cancellara if you want a better chance on being right.

The Tour of Lawrence Street Sprints were last night in Lawrence They are getting better and better every year. I didn’t do them even though I had a number. I’m not much up to sprinting ability right now, so it would of been a waste of time. Plus, I wouldn’t of gotten to watch the show. Colton Jarish, Mercy, who won both races at the Tour of Kansas City last weekend won the sprints over some good guys. So, that is 3 in a row for Colton. I think Brad Huff, Jelly Belly, was 3rd, maybe 2nd, I didn’t see the results. But, Colton is much faster than I had thought. I didn’t remember that he finished 2nd last year here to Andrew Dahlheim.

I didn’t even ride one inch yesterday. I’ve been waking up feeling like I’ve been run over by a car every morning this week, so I thought I might try something different. It didn’t work so far yet this morning, but I won’t know for sure until I race at 5:30 tonight. The circuit race is on KU campus and has an unbelievable amount of climbing, nearly 6000 ft., I believe. A 4 mile lap and we do 14 laps. Plus, it is supposed to be about 103 at start time. Should make for a very hard evening. There is a pretty good, well balanced field here, so it should be good bike racing no matter what.

I’m thinking I should go out for a ride this morning, but now that I think about it, I think I’ll just watch the Tour prologue to warm up. Seems like a better choice right at this moment. 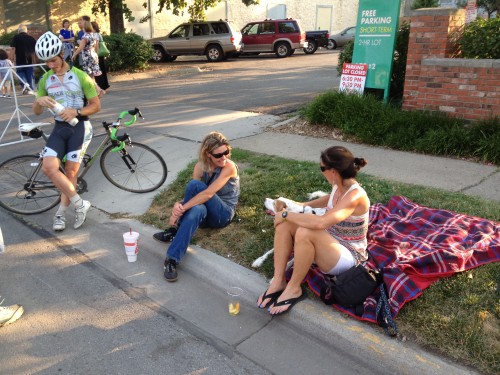 Trudi, Bromont, Rita and Bill before the men’s start. But, Bill is race ready with his clinchers and seat bag still attached. 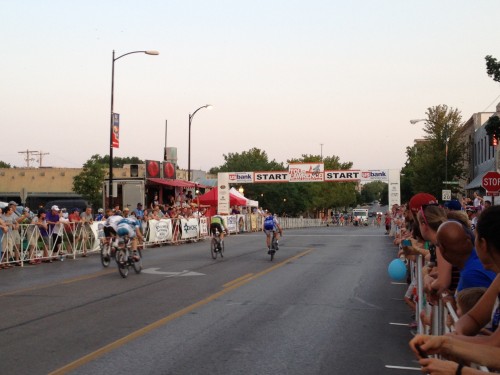 Joseph barely nipping Ben Stover, Tradewind to get into the finals. 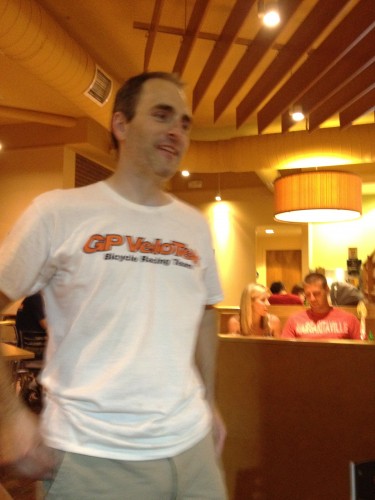 We ran into Craig Sparks, the Czar of the street sprints. He said he was pretty happy with how they went this year and it was the first time in 4 years that he was going to be able to sleep afterwards. He told us a story about a girl, who he said had driven “from the moon” or somewhere really far off, and there was no way he could appease her complaints. He sounded like he might have needed some therapy after that year. It went pretty flawlessly this year though. 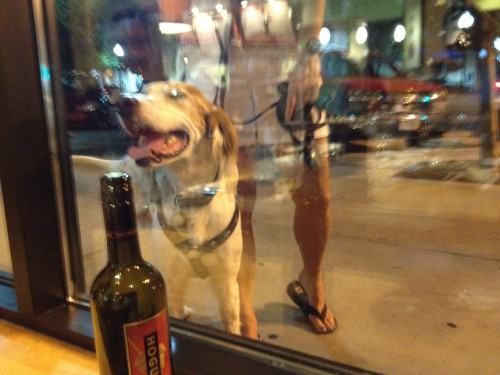 And Bromont, waiting by the restaurant window patiently, for his normal stroll down Mass. St. in Lawrence.