Yesterday wasn’t a good day to race bikes for me. But, that being said, a day racing bikes is mostly better than nearly any other day, ATMO. That doesn’t mean it is enjoyable always. And it wasn’t for me, for about 70 minutes, at 4 pm.

I don’t know what the deal is with me and the Tour of Kansas City. When they held the race on Cliff Drive, I used to ride pretty well. But now that they have these new courses, I’ve had so pretty horrible days. Maybe because it has been so abnormally hot for the last few years, I just don’t know. And yesterday wasn’t an exception to that.

Luckily, Brian Jensen, my TradeWind Energy team mate, is exactly the opposite here. He’s won the overall at the Tour of Kansas City at least 3 times and now nearly 4.

The play by play is textbook bike racing 101. 10 guys away with 5 riders from the Mercy Cycling Team and only Brian from our team. There were 4 Mercy guys pulling hard and one, Colton Jarish who won the day before, sitting, waiting for Brian to go. Brian rode nearly a perfect race. He jumped out of the break, pulling Colton around to lap us. We went to the front and went medium hard to make sure that no one else was going to come around. The break was messing around and we nearly caught them with a few laps to go. Colton attacked Brian just once and then it came down to a sprint. We started to lead it out, but Zach Allison came by with 1/2 a lap to go with Colton. Brian got behind Colton and followed Zach and Colton through the last corner, about 300 meters from the finish line, into a headwind. I thought Brian was perfect. But it wasn’t to be. Brian came by late, but afterwards said he was a little over geared. Colton won by about 1/2 a wheel.

I think it was a great race from their perspective. I sucked from my perspective, but that is just a personal feeling and nothing really to do with the general outcome of the race. I can’t see anything that Brian did that wasn’t right. And Colton rode a nearly perfect race too. Sit on Brian, get a super leadout from a team mate and win the sprint. Can’t do better than that. So, from a bike racing perspective, the day was really interesting.

I’m glad the weekend is over. I suffered like a dog. My shoulder was so sore with about 10 laps to go, if I would have been there on my own, I probably would have quit. I slept nearly 9 hours last night, which was nice. The heat sure takes it out of ya. I’m beat. I’m going to have to reconsider my heat acclimation plan, at least for today. I have no desire to go ride 3 or 4 hours at mid day in 102 degree heat. Plus, I think it would kill me. Sure would be a nice time to head up to the mountains, but the Tour of Lawrence is this weekend. Maybe I can turn it around by then. 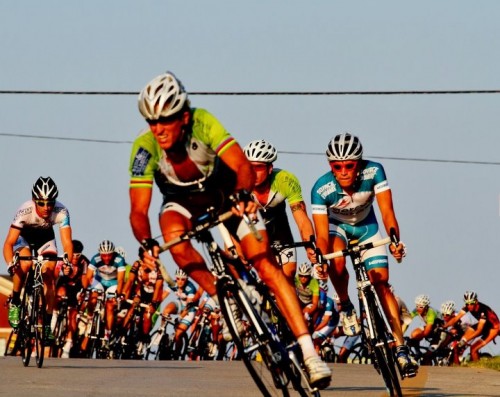 I got this photo off Facebook. One thing these shoulder separations are doing is pushing my elbows out. It is so weird that I thought my right shoulder was bad, but now it pales in comparison to the left. Photo Credit: Elizabeth Rangel 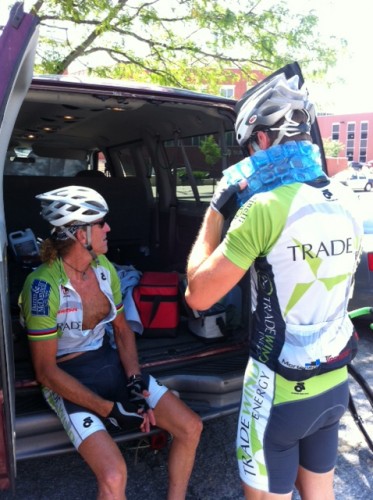 Brian brought a sheet of ice cubes to cool off with before the start. 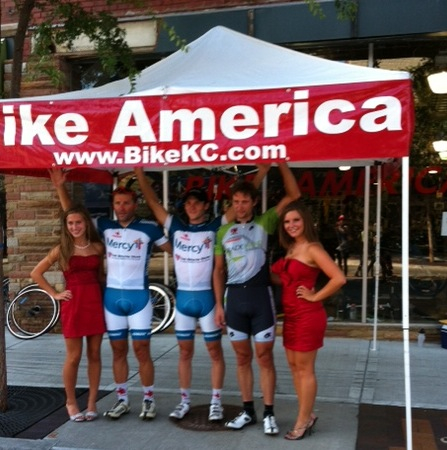 They even had podium girls. Shad Smith, Colton Jarish, then Brian Jensen. 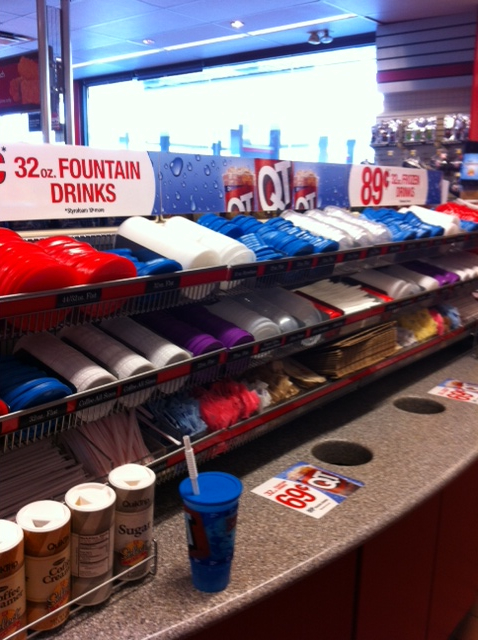 This is just the lid selection for drinks at Quik Trip. It is ridiculous. They must sell a hundred million gallons of soda a year. 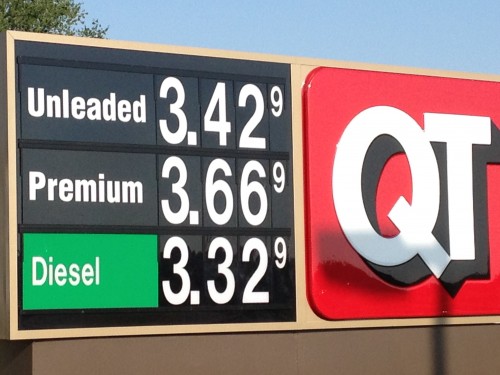 It's been a while since gas and diesel prices were inverted. Maybe this summer it will get more common. 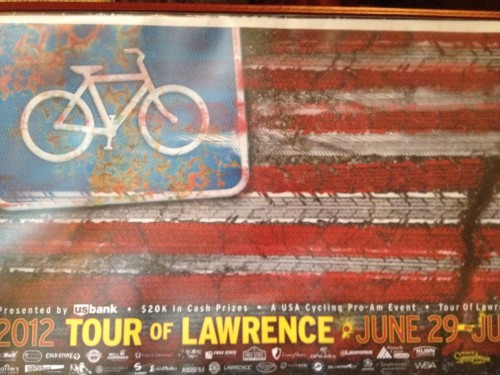 We went by Free State in Lawrence for dinner after the race and they have special menus printed up for the Tour of Lawrence this weekend.