I have never been good on the course I rode yesterday at the Tour of KC. And yesterday wasn’t an exception. I wasn’t completely horrible, but not even close to good. It most likely was mainly the heat, which wasn’t nuts by Kansas standards, maybe 94 or so, but if it wasn’t, then something drastically happened to me in the last few days to change how I am riding a bike.

There was a decent sized field at the start of the criterium, maybe close to 50, I’m not exactly sure. The Mercy Cycling Team had 9 guys, so I knew it was going to be us against them. My whole TradeWind Energy team of 5 was there, so that was the best we were going to do. Everyone is a little under raced this season, obviously including myself, so it wasn’t going to be an easy race to predict or participate in.

It started way too fast for my liking. I was pretty gassed following moves after 3 or 4 laps. Bill and Ben were in my shoes. Brian and Kent seemed to be doing better. Flash forward about 30 minutes and eventually both Brian and Kent got off the front with a couple Mercy guys and Bob Cummings. I thought it was great. Somehow, it got down to Bob, one Mercy rider, Colton Jarish from Austin, and Brian. Kent and Zach Allison got shelled or sat up, I’m not sure. Adam Mills did a good job to bridge up to them with one other guy. Eventually Bob came off Brian and Colton. Colton got the best of Brian at the finish. I ended up 3rd in the field, which could have been much worse. Kent finished 4th. It wasn’t horrible, but could of went better for all concerned.

I got into a little spat with Bryan Duvall, with a couple laps to go. He must not know how much I hate people touching me on purpose in races. Especially when it isn’t at a crucial time. I think I made my point, but you never know. It seems like so many people are using their elbows, thinking it is different than their hands. I guess technically it is, but it really isn’t. It is becoming so common that maybe it is just here to stay, I don’t know.

Today is another criterium in downtown Lee Summit. It is now supposed to be 103 degrees at 4 pm. I’m going to enjoy that much less than I did already. Plus, all the highway signs yesterday were flashing something about it is going to be an ozone alert (pollution) in Kansas City today. (Kansas City sits in a basin, kind of like Denver, so they have some pretty bad days in the summer.) I plan on riding most of next week during the heat of the day to try to get somewhat more used to it. But, as of now, my heat acclimation is horrible. I was hoping for more after not completely melting in Sunday’s race at Tulsa Tough a couple weeks ago, but it wasn’t to be. My left arm/shoulder isn’t really lovin’ this either. I thought it got so much better in just a few weeks that it would keep getting better. But, no, the more I use it to race, the worse it is. Go figure. I’m going to race through next weekend at the Tour of Lawrence and then sit down and think about what is best for me and the rest of the season. Until then, I always have this afternoon to look forward to. 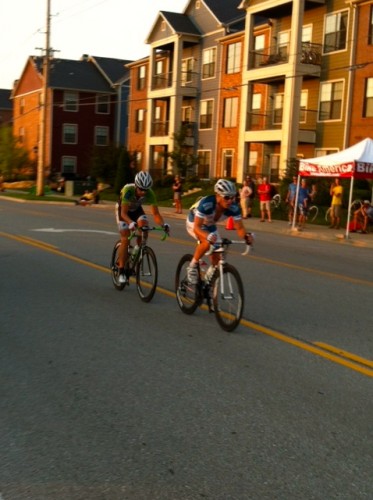 Colton and Brian late in the race. 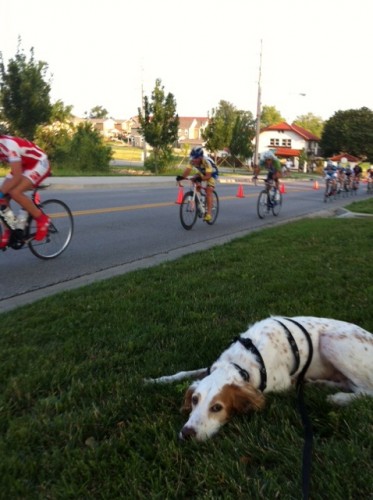 Bromont bored with me struggling in the background. 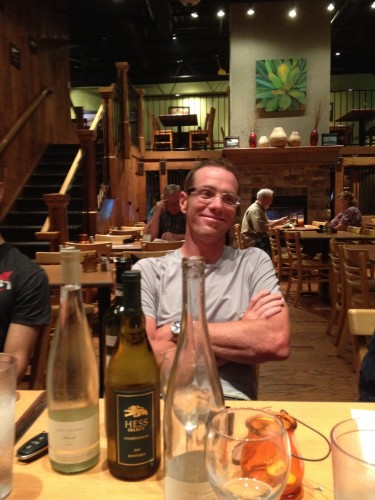 At dinner with Jay Thomas, Czar of the Trek Stores Midwest. Jay raced twice yesterday and I suppose twice today. He won the 40 + race and finished somewhere in the top 20 in the PRO 1/2. He is obviously a connoisseur of fine white wines. 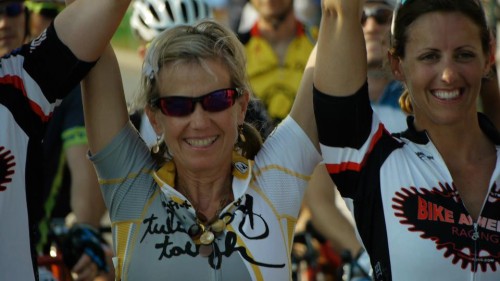 Catherine won the women's race. Here she is next to Kelly Skinner.