I’ve been getting a bunch of emails and comments here about the Omega Pharma-QuickStep team doctor, Jose Ibarguren Taus, and how it seems pretty fishy that as he moves around the professional cycling ranks, the teams that he works for seem to excel. I have to admit, it seems screwy.

But, I don’t think I can’t go to the extent and say that there isn’t a need for team doctors in professional cycling. I just don’t like it that the doctors travel around with the teams at the races.

Someone posed a question a few days ago about even the BMC team has 6 doctors. I understand that seems like a lot, but none of these doctors work exclusively for the BMC team. They all have their own practices and “moonlight” working bicycle races. I know 3 of the doctors personally. I’ve know Max and Eric Heiden for decades. Eric is an orthopedic surgeon and fixes the riders when they are broken. Max does all the physiological testing on the team. They do switch off turns going and working races throughout the year. If I ran a professional team, I’d make it a priority to have a good medical staff.

What I see as screwed up in the system is when the doctor’s sole employment is traveling around with a team. I think that at the races, the riders need to see the race doctors, not their personal team doctors. I don’t think that team doctors have any place at a race.

In the case of Dr. Jose Ibarguren Taus, I don’t understand why he is even allowed near a bike race team. He is involved in the Mantova doping scandal, and has been summoned to testify at a hearing in July. He has got a pretty dark background, at least circumstantially, and has no business being employed by Tom Boonen’s team.

It is much like when the unofficial “war” started between Greg LeMond and Lance Armstrong. Lance was working with Dr. Ferrari and the good doctor made some asinine statement saying the EPO was no more dangerous than orange juice. Greg did an interview with USA today and said that with all the doping and corruption in the sport of cycling, that Lance needed to separate himself from a guy that would say that. That was the first shot of a never ending war. Lance officially separated himself from Dr. Ferrari, but I guess he kept sending him money for some reason.

I agree with the premise though. The sport has too many problems with doping and such that there can’t be doctors involved that aren’t squeaky clean. It leaves too much room to speculate and question. And we do that enough already way too much. 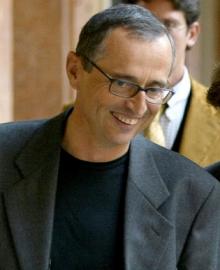