Yesterday we race 15 laps of the Lago Vista course for a total of 83 miles. The course is pretty hard, but not as hard as it is going to be today. Today we ride the race counter clockwise, which is up a descent that we did at 54 mph yesterday. We do that 15 times also, so it is a pretty hard race. There is nearly 8000 ft of climbing in the race, hardly a flat section on the course.

I don’t really know what to think about yesterday. It was pretty windy, but the wind didn’t play too much of a factor into the results. There was some gutter riding, but not enough to get rid of any true contenders. It was the normal Texas guys, 10 Elbowz riders, plus a full contingency of Bontrager-Livestrong youngsters. Plus a few other guys that we’re here last weekend.

The race started out pretty tame. My legs felt pretty good, but my lungs were toast from when I clipped in. I couldn’t tell whether I was getting sick (Bill is sick) or just totally clogged up. I wanted to ride off the front. For a lot of different reasons, but mainly so I didn’t have to try to make the selection when it went. There were too many places where I could be way out of position and miss the move, so I figured it would be better to be up the road and let the move come to me. It’s not a way to win a race like this, but that was never going to happen anyway. I’d guess I rode 10 of the 15 laps off the front. With anywhere from 1 other guy to 8. With about 8 laps to go I went away with Tyler Jewel, Elbowz. I saw my friend, another Kansas rider, Jay Blankenship trying to bridge up, so I waited for him. Tyler was pretty much just sitting on, which I expected. Then the next lap, Adam Mills, from Lawrence, KS, was away, so I waited again. Jay, Adam and I pulled Tyler around for 3 laps. I was pulling the whole climb, which was 1/2 a lap, and then we rotated the other 1/2 lap. I wasn’t going fast, but sort of hard. I wanted to be up close to a minute. The out of sight, out of mind thing.

Anyway, with about 4 1/2 laps to go, the “real” guys started bridging up. When it was all said and done, it was 5 Elbowz riders, 1 Livestrong guy, plus Stefan Rothe and myself. Adam and Jay got shelled. The last time up the hill, Heath Blackgrove jumped with Joseph Schmalz on his wheel. I was expecting this. I knew where it was coming. I made a huge error trying to stay on Joseph when he came off Heath. I was more tired than I thought, plus Joseph’s jump is better than mine, at least right now. So, I was in no man’s land, just for a few seconds, but enough to be toast. The Livestrong rider and Heath blew by me a little bit later. Stefan was slow to react, but came by hard in the gutter, hurting the 3 remaining Elbowz guys. I got on, but was cramping some in my left leg. If Stefan would have left some room to draft initially, I think I might have been able to pull through and bridge back up. But, that moment passed and we were dropped. The front 3 rode away from us and we just jacked around the rest of the lap. The Elbowz guys started attacking, one up, on the down hill and ended up getting 4th and 5th in the race. Stefan was ahead of me in 6th, I way 7th, beating one Elbowz guy.

I don’t know how to judge that result. I did an incredible amount of work, but not full out work. It was most likely the only way I was going to make the final selection, but by doing so, I wasn’t good enough to make it into the final group. That’s bike racing I guess. I’m pretty hurt today. We’ll see how it goes. Sometimes when I’m mildly destroyed, I come around after a couple hours and feel pretty good. I hope that is the case today.

It was Jospeh’s birthday yesterday, 22 years old. It is always nice to race on your birthday and way better when you win. Heath will most likely win the race today. That is how it went last year, Joseph winning on Saturday and Heath on Sunday. But, you never know until the race is over, so maybe it will surprise me some. 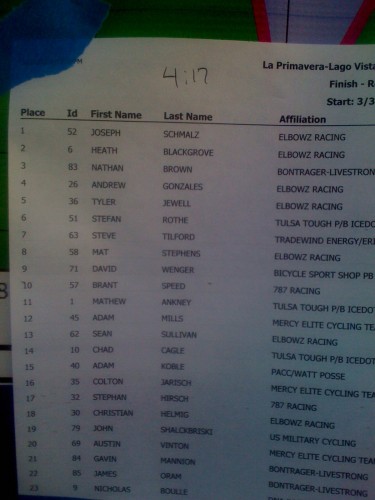 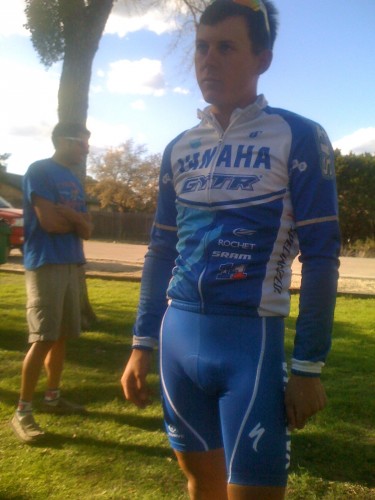 Winner and birthday boy, Joseph Schmalz, after the race. 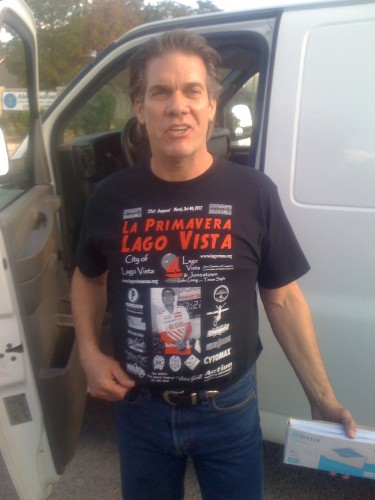 Long time Lago Vista promoter, Don Hutchison. He always has great t-shirts. This year it had my friend, Raul Alcala’s photo, from the 7-11 days on it. A classic. 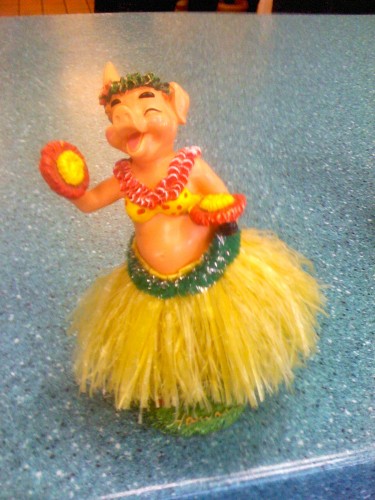 I saw this little hula pig at a taco stand we stopped at on the way home. I'd like one for the dash of my van. It was really cute. He looks so happy.