I’ve said it many time, I’d rather just die early if they could subtract the amount of time I’ve spent in porta potties, bus stations, and laundry mats off my life. Actually, I’ve had some interesting times in bus stations and a few in laundry mats, so that only leaves porta potties.

I pretty much hate porta potties. I’ve spent way too much time in them for my liking. Racing bikes, we’ve all spent more than our share of time using them. At summer races, I dread having to go into a porta potty. We’ve all been there and there is nothing enjoyable about the experience. The hotter it is, the worse the experience.

But, I’ve never really ever experienced the winter porta potty usage until last weekend. I’m talking about a below 0 winter experience. At the Pre-Birkie, I saw this line of new porta potties and thought, how bad could it be? It is -3, so it couldn’t have much, if any, odor. I go to the 1st one and whoever was in there before me missed everything but the toilet seat. So, the seat was covered with frozen pee. I closed the door and moved to the next one. Same deal. Then the next, same thing. So I went into the next one and it wasn’t any better. I took some toilet paper out and tried to wipe the ice off the seat. Didn’t work. And I didn’t feel much like trying to chip the “ice” off, so I covered the seat with toilet paper and went about my business. Needless to say, when I stood up, I noticed a certain amount of “ice” was melted by my body heat. It was mildly bothersome. 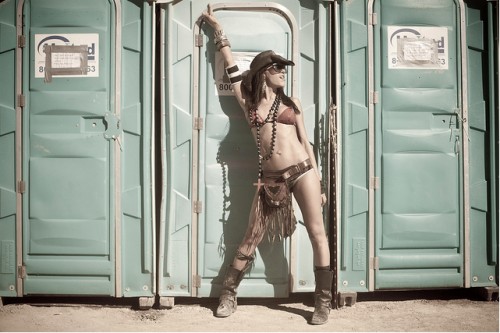 This porta potty line wouldn't be so bad. Burning Man 2010.