The title above pretty much tells you from what perspective I’m coming from with the thoughts below. I am a cyclist, not a nordic skier. I ski some, but I am not a skier. I really don’t know much about the sport. I do know more than 99.9% of the population, but nothing compared to the people that would put, I am a Skier on the title of their blog post.

Skiing sucks in many respects. Not only racing, but just having the sport as your sport. For me, there are way too many problems with the sport to make it a sport that I’d ever put a ton of effort into. There are so many conditions that have to be somewhat right to even do the sport.

The sport is super dependent upon the weather. That is needless to say. You pretty much need snow and somewhat cold temperatures to ski. And here in the US, there aren’t that many places that have enough snow, for a long enough period, to ski for a good period of time. And there are fewer places that have that weather pattern and also have a large population. Here in the US, Americans tend to not live where it is snowy and cold for most the winter months. So, where there is usually good snow and conditions for nordic skiing, there aren’t a lot of people around to take advantage of it.

So, the sport is limited to people that live or have the ability to travel and stay somewhere there is snow for months at a time during the winter. And even then, the season is usually 4 months or less, depending upon where you go or decide to travel. That leaves 8 months of training or I should say, cross training, for the 4 months of maybe competition or participation.

That is the general weather. So then we get to the specific weather. There are so many days during the winter, even though there is snow, you still can’t ski. Too much snow is a problem. If it snows a foot and a half tomorrow here in Cable, it would be a couple days before the skiing would be good, even if they got the big machines out pretty quick and get it packed down. The grooming is super temperature dependent whether it sets up good or not. Then too cold, something below 0, the snow gets slow and it’s difficult to ski for a long duration. Then if it’s too warm, the snow gets slow again.

That gets us to the equipment it takes to make the trail to ski upon. It takes a ton of expensive equipment, and people running it at the appropriate times, whether it’s the middle of the night or anytime during the day, to keep a ski trail in good shape. So as an athlete, you are dependent upon the organizations and others who groom, to be able to ski.

Then there is the equipment you need to ski. It isn’t expensive compared to cycling. But if you want to have the best equipment for each and every condition, plus the right wax etc. to go fast each time you ski or race, it is super expensive and energy intensive. I’m not that that into a sport that is so dependent upon equipment, even though it might seem like cycling is. It isn’t compared to skiing. You can miss the wax so badly at a ski race it would be equivalent of starting a road race on a MTB with low pressure. The best guys probably never have that happen, but it makes a huge difference. There isn’t something in cycling that is close to as important equipment-wise as having the proper skis, with the right structure, with the perfect wax on race day. Races shouldn’t be decided on equipment.

So lets get to being the athletes. Here in the US, there is a pitiful amount of support for the elite nordic skiers. That is compared to cycling. And cycling is a pitiful sport for financial support compared to the main US sports, baseball, baseketball, football, golf, tennis, etc. So that makes the support for nordic skiers seem that much more minimal. It is wrong. I know lots of elite skiers and those guys definitely train as much, if not more than most elite cyclists. And their compensation is usually nearly nothing. There are a scattering of programs, like CXC, that do a excellent job of giving their athletes opportunities to compete on a high level, but it isn’t common.

What set me off on this “rant” was that after the Pre-Birkie on Saturday, we went to the Rivers Eatery for pizza that night. The guys that got 1st and 2nd place in the 42km race, Santiago Ocariz and Eric Wolcott, were working there. Wolcott was doing dishes and Santiago was making pizzas and clearing tables. I was amazed, not in a good way. Dennis told me the 3rd place skier, Waylon Manske, was for sure working that night at Telemark Resort. It is crazy. The Pre-Birkie isn’t huge race, but it was a pretty big race this year. I can’t image going down to Tulsa Tough or Nature Valley and working after racing any of the stages. I’ve never seen it happen in cycling. At least not on a planned or constant basis. It just doesn’t work. And this is business as usual for these guys.

I had the pleasure of talking to Santiago for a few minutes that night. He is a super nice guy and obviously a very good athlete. He and his wife both ski for CXC and both work during the season. And off season. I’m not sure how our country is going to develop world class nordic skiers on programs like this. I know there are a handful of nordic skiers that are making pretty okay money. Okay money compared to working at McDonalds, not okay money compared to real money. But still, it’s not even close to cycling. I have to be realistic here, cycling is a niche sport, worldwide, if you use compensation to the athlete as a gauge of success. So, skiing would be miniscule then. It seems so unfair.

So, there you have it. I’d never be a full time skier. I think it is a beautiful sport and I love doing it, but on a limited basis. I am so fortunate that I picked cycling, or maybe cycling picked me. And it’s great that cross country skiing has those same fortunate people. 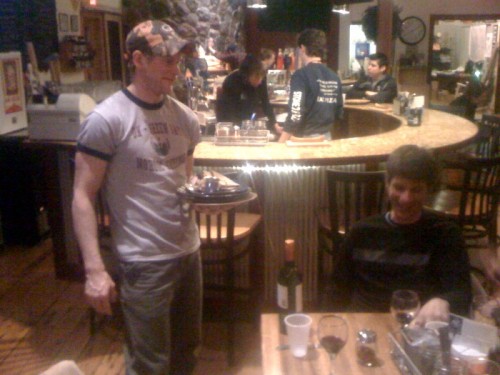 Santiago, on his feet for hours, just after he won the Pre-Birkie. 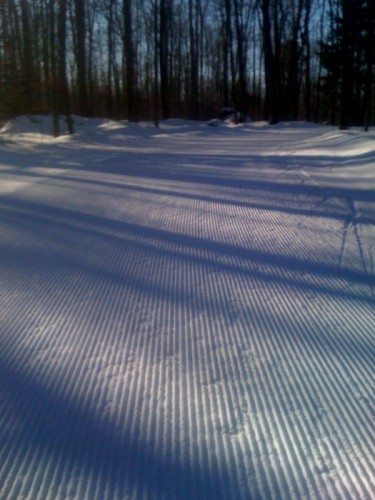 With our new weather patterns, etc. this corduroy isn't that easy to find nowadays. 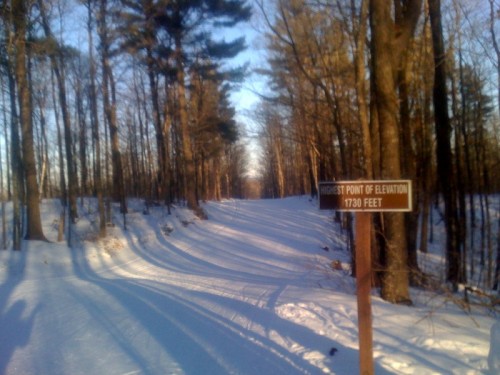 My favorite place to ski, over the high point on the Birkie trail.

12 thoughts on “Disclaimer: I am a Cyclist”