Perception is everything. It is key in many aspects of life, especially sports. If you perceive that you have prepared and have good form, you normally will have a pretty good race. If you miss a nights sleep or loose your bike for a few days traveling and you have a bad mindset, you tend to do worse that you might have done otherwise, even if you needed a couple days rest before the event. Mind over matter or something like that.

I’ve been sleeping pretty short the last week and a half. Probably because I have this roofing project on my plate and my mind keeps working through things subconsciously when I’m not up there working. I figure out perplexing problems when I’m not directly thinking of them. I’m not sure how that works, but it does for sure.

I think the same works for advertising. Advertising gets to you in a subconscious state and is just sitting there. Somewhere I was reading about aerodynamics in road frames and it got under my skin. I think the numbers probably come from a random number generator, but the frames are said to save you somewhere between 10-30 watts at 40kph in effort through their aerodynamic tubing. Cervelo is saying their S5 is saving around 10 watts. The guys at Scott are claiming closer to 20 watts for their Foil, depending where the wind is coming from. 20 watts is pretty substantial.

Honestly, intellectually, I think the numbers are not real and there isn’t much going on here. Tony Rominger rode 55.291 km during his hour record on a standard Colnago track bike. This was a different era, so the number is going to be inflated, but you can’t tell me he could have went that much faster on a aero frame. That being said, I can’t get it out of the back of my mind. And if, by chance, I happen to get an aerodynamic frame, I know that my perception is going to be that I am saving those 20 watts and going that much faster.

It’s the same with the tire width thing. How much difference is 1 mm. It’s hardly much more than the thickness of your fingernail. There are 25.4 mm in an inch. Volume is super important in cross, but that one millimeter isn’t going to do much. That being said, I want to be riding 33 mm tires and not 32. When I’m going through my mental checklist, tread is really important, but the width/tire volume is there too. It’s never going to be a check off the list unless it’s 33.

We won’t even go into wheel technology. Claimed weights and wheel speed advertising are insane. I have no idea what to believe there. But if you’re not racing on $2000 carbon fiber wheels, you’re definitely in the minority. I’d probably do just as well riding 32 spoke Mavic GP4’s from the ’80s in cross, but that’s not happening.

This all is one of the fun parts of the sport of cycling. I think it is one of the reasons that cyclo-x has become more popular here in the US. All real cyclists love to get a new bike. Especially a new bike that fills a void and does something substantially different than their other bikes. And a cross bike does that. So riders are always looking for an excuse to go out and get something new. No matter how silly those excuses are. And a lot of the advertising is pretty silly. 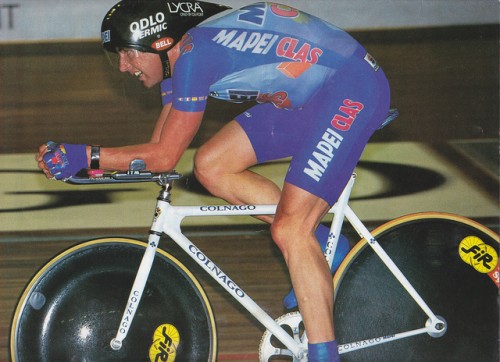 Tony Rominger on his Colnago track bike, adding over 2 kms to the current hour record of the time.

8 thoughts on “Advertising in Cycling Works”