Yesterday’s qualifying races were pretty decisive in my age group. It is down to 2 guys it seems, unless something really strange happens. The other categories are all over the map. Don Myrah looks like the course suits him pretty well, but you never know if the other riders were going hard or not. There is a Belgian guy that was 2nd last year in his age group and he won the other qualifier, but Don’s time was a lot faster. Peter Webber and Brandon Dwight both won their respective races, but Peter was challenged by Richard Feldman and only beat him by 5 seconds. But, like I said above, you never know how hard anyone was going. You can see all the results, lap by lap here.

The course must have gotten much worse as the day wore on. During my race it was getting slower each and every lap, but I was also riding much easier each and every lap. It sort of surprised me that the race right after mine, Peter’s race, the first lap times were so slow. They looked like they were racing hard, but I couldn’t see the running sections and that is where most everyone would take it gingerly I’d guess.

It froze pretty good last night and there is only a dusting of snow on top of it now. It is 19 degrees right now. I don’t know if the ground will really every freeze solid, even though it’s not supposed to be above freezing all the way until I race again tomorrow at 11. The ground was pretty warm up until now and I don’t know how long it takes for that to happen. I’d like the conditions exactly the same as yesterday, but that isn’t going to be the case. It’s going to change up constantly.

Ned is racing a qualifying race at 11 this morning, then the course is open for pre riding from 12-1 and then the 30+ race for the jersey at 1. I’m not sure I can be out there for 3 hours since it’s supposed to be pretty cold, but I know I probably will. Catherine started driving here yesterday, but got stopped 120 miles short in Evansville, IN, because of snow. She’s gonna just drive the rest of the way this morning in time to ride the course at noon.

I can hardly wait for this race to be done. I would have liked to do it a week/month ago. Or right after yesterday’s qualifying race. It seems so strange that it is the middle of January now. I’m sure that will hit my harder when the weekend is over. Road season starts in a month down in Texas. It’s a 12 month season now. 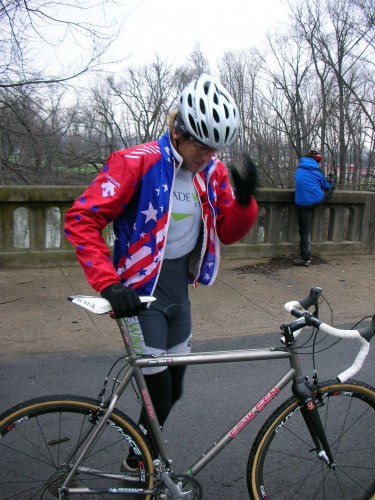 Clean before the race. 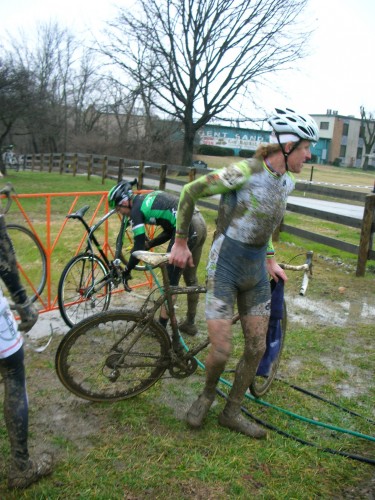 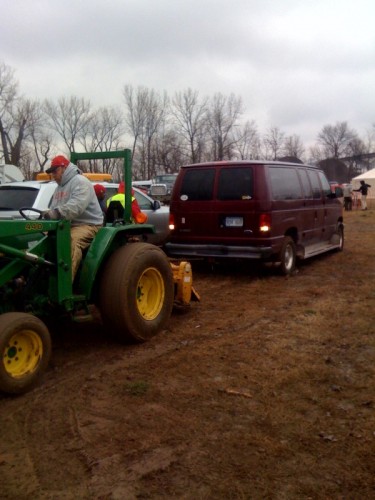 This tractor was pulling everyone out of the race parking. It is so slick, I have no idea what they are going to do today and over the weekend.