Cyclocross has always been an energy intensive endeavor off the bike. It doesn’t matter if you have your own mechanic, there is a ton of stuff to do that you don’t have to do for road racing or MTB racing. It probably has to do with the fact that you have to have so much equipment. And things go wrong.

The night before we were leaving to go to Plymouth, MA, where I won my first cyclocross National Championship, we were packing gathering up everything to go into the van and someone noticed that the lug on the head tube of one of my 753 Raleigh cross bikes had a small crack in it. I wasn’t too concerned because we had spare frames and there were mechanics there to change over the equipment. Upon closer inspection, we saw that nearly everyone of our bikes had cracks. It was a complete disaster. I should have know, because I had broken off the head tube of a 753 frame the year before at Nationals in California.

Then the next year, I was racing the Sorrento Valley Cyclocross at the UCSD campus in San Diego the week before Nationals in Santa Cruz. There was a huge dip, something that you had to hit with an enormous amount of speed to get up the other side, on the course. We had custom built Raleigh frames built by Marinoni, from Canada. I won the race and was feeling pretty great afterwards, having good form for the Nationals the next weekend. Then I looked at my frame and both the head tube and down tube had big cripples in them. It wasn’t as bad as the year before because I had a week to get a 2nd replacement frame. I ended up with an Alan aluminum frame, which was the cross frame of choice in the 80’s. It had a flat top tube for shouldering and was way lighter than a steel frame. (I have it down the basement still. I bet it is more whippy than a wet noodle.)

Anyway, nothing like this has happened so far this trip. But, I haven’t left the driveway yet. Okay. That’s all I got this morning. It is super cold and windy this morning. North wind. It seems like I’m always driving against headwind for some reason. I can’t figure that out. Along with a ton of other things. 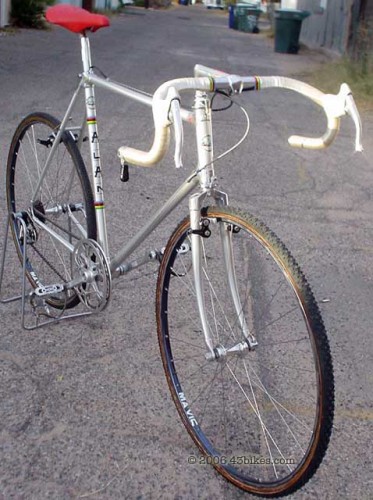 9 thoughts on “It’s Always Something”