It is official, Philippe Gilbert has signed with BMC for the next three seasons. I kept reading everywhere that Gilbert would be stupid to do just that, but I disagree. It is going to be nearly impossible for him to repeat the season he had this year. That just won’t happen. I think that having Thor, Greg Van Avermaet, and even Cadel helping him in the classics will definitely give him a great chance of winning more often. I’ve never been bummed having the best guys in the peleton on my team, so I can’t understand why he would. Three seasons goes to show that BMC is in it for the long run, which is very good for the sport.

Riding yesterday, I was thinking that it will be kind of boring when all these positives for doping disappear from the sport, thus the media. I hate to say it, but when there isn’t a good race going on, I kind of look forward to the “gossip” of who’s been caught. I know that sounds bad, but it is just how it is. That being said, I would gladly put up with the everyday, boring, cycling press if we’d all get our shit together and put all this drug stuff in the past.

There was a huge storm here last night. I don’t know how much it rained, but it was coming down in buckets. The streets were full, gutter to gutter. Tons of branches down. We haven’t had electricity since last night. It is strange how much one depends on that. I had to go and use my car to charge my cell phone this morning. It is weird not being able to just get on the internet, or use the refrigerator, stove, etc. I have no idea when they are going to get around to fixing it. I wonder how long stuff stays frozen in the freezer? Guess I might find out.

There are two races this weekend in Missouri. A criterium in Sedalia on Saturday night at 9pm and then the Otterville Road Race at 9 am the next morning. It kind of a short turnaround, but both the races are fun and on good courses. I’m 90% in. The other 10% is leaning towards heading to Colorado. Maybe I’m closer to 70/30. I might check to see if there is anything going on out there for races on Sunday. 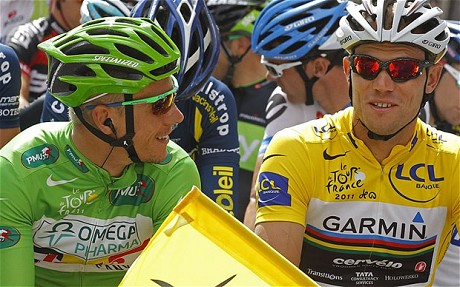