Yesterday someone posted a photo of Jocelyn Lovell under comments. It was a weird coincidence, but I’d just been talking to Bill about him on the ride before. I am embarrassed to say, but I hadn’t thought of him for quite awhile before this.

If you don’t know who Jocelyn Lovell is, you should. He has 40 +/- Canadian National Champion titles in lots of different aspects of cycling. Plus, he’s a multiple Commonwealth Games Champion and an Olympic Silver Medalist. His huge results were on the track, but he could also kick ass in long, hard road races. Here’s a link to a article on him.

I didn’t know Jocelyn too well. I doubt he would remember me. But he did have an impact on my life.

I can remember distinctly the first time I saw Jocelyn Lovell. It was at Superweek when I was 14. My first big race out of the state of Kansas. We were staying in the dorms at the Milwaukee School of Engineering. I remember walking into the shower and there he was. I was so scrawny, less than 100 pounds and he was a beast. He had a pierced ear, a gold necklace and huge legs, that were really tan. I was so intimidated. I did an about face and high tailed it back to my dorm room.

I ran into Jocelyn on and off some as I traveled the racing circuit, but wouldn’t have raced with him much, if at all, because I was a junior and he was winning real races. When I turned Senior, I suppose I raced with him some. I think he was kind of free lancing the criteriums, plus the track stuff, and I was mostly racing stage races out of the country.

My one real memory of racing with Jocelyn was in 1983 at the Biltmore Estates Stage Race in Asheville, North Carolina. It was an important race and the last race I was going to do before I went over and raced the British Milk Race on the National Team. I think it was 5 or 6 days long. Anyway, I got sick right before the race started, but decided to go ahead and ride. I was worried if I didn’t race, I was going to get super sick and not be able to go to England. Anyway, I was just sitting in the fields not racing, but just riding.

The fourth stage was a circuit around the Biltmore Estates. I think it was around a 5-6 mile loop and we did it a ton of times. The race must of been close to 90 miles long. Anyway, it was wet and the course had a mile climb up to the finish, but right after had a good descent down. Somehow, and I don’t remember why, Jocelyn and I got into this contest, during the race, of who could coast down the hill from the back of the field and be first to the front of the field. Remember, it was raining, so it was pretty tricky.

So, lap after lap we’d go over the finish line at the very back of the field and then tuck and blast by everyone on the descent. Time and time again. We were pretty evenly matched I think. Anyway, I had no intention of going for a place in the race. I was sick and not riding well. But, the last lap I started the descent towards the front of the field. I did my normal tucking and when I got to the bottom corner, I didn’t slow down much and when I looked back after the corner, I had a pretty good gap, maybe a 100 meters or so. It was still 4 or 5 miles to the finish, so I didn’t put out too much effort. But, I was feeling pretty good right then and thought I’d give it a go. So, I reached down to shift and to my amazement I was already in my 12. That changed my mindset immensely. I couldn’t believe I had been riding in my biggest gear, feeling that good, going up a false flat.

There was one small hill in the middle of the loop, the feed hill and I decided I was going to leave it in my 12 and ride it off my seat and not look back. I decided that it would be best to look back if I got to the last climb up to the finish. I rode up the feed hill feeling pretty great and got on top of the gear before the last 1 mile climb to the finish.

I decided not to look back until I was 1/2 way up the last climb, and again, to my amazement, there was no one in sight. I was going pretty good and knew I’d won the stage. It blew me away. Being able to win solo, when I thought I was riding so poorly. This was a big race, with Steve Bauer, Ron Hayman and nearly every other good rider in North American racing. Bauer was super nice after the race saying something like he was surprised that I stayed away because they were going really hard behind and he couldn’t believe I was pulling away from them.

Anyway, I went up to Jocelyn after the awards ceremony and thanked him for keeping me entertained during the race. I honestly believe that I wouldn’t have won the race if I wouldn’t have been racing Jocelyn down the descent lap after lap. That is where I got my distance and it was the main reason I would the race.

I remember reading about Jocelyn getting hit by the cement truck and being paralyzed. I always thought that when I went up to Canada, I should go by and see him, but just never did. Anyway, it’s good to know that he’s still getting along pretty good and keeping the hope alive that he’s going to eventually be able to ride again. He had that kind of mindset racing, I don’t know why I would have thought that it wouldn’t still be there now. I’m going to make it a point to stop by and say hi next time I’m in Canada. 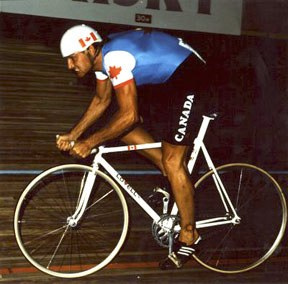 You can see why a 14 year old would be intimidated by this beast. 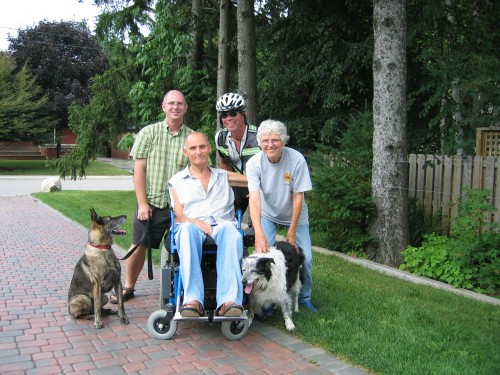 Dogs and all, my kind of guy. 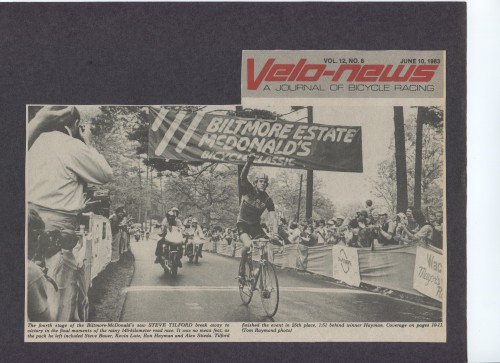 The photo from Velonews. Bauer, Steida and Hayman are sprinting behind.