It is funny how an individuals perceives pressure on himself that affects his performance. It can motivate/focus or hinder you just depending on your mindset. I for one, thrive on pressure when I’m feeling like I can perform. But, I hate it when I’m not sure of my ability.

I remember one time riding the Vail Time Trial in the Coors Classic that this came into play. I was riding for La Vie Claire and was going pretty well. But I was apprehensive about my tt’ing ability uphill. Paul Koechli, the team director, came up to me an hour before the tt and told me that I was supposed to just ride the race and not race it. I was supposed to be fresh for the criterium that afternoon. It was such a relief. It was so nice not warming up and kind of surprising to me to observe has crazy nervous all the other riders were getting prepared. It was sort of like coming late to a party when everyone else is already wasted and you’re completely sober. Everyone seemed so silly.

Anyway, the Vail TT goes along the frontage road back towards Vail Pass and is gently rolling uphill for 5 miles and then climbs for about the same amount. It is the same TT that US Pro Cycling Challenge is using next month. I just cruised on the frontage road, going probably around 23mph. When it crossed under I-70 and started up, everytime I got a little winded, I’d just shift in the back and spin. Krestel bicycles was just starting that year and had made me a custom 58 cm frame to show at the race. I was so within myself, I could nearly have a conversation with all the spectators pointing out the frame and commenting.

Anyway, before I knew it, there was the 2km sign. I thought, “shit, that is just over a mile.” So I shifted into my big ring and rode off my seat to the finish. I wasn’t close to tired. Anyway, I was surprised that no one caught me from behind. I waited at the top for the guys behind and it seemed like forever before anyone came. I saw my friend, Nathan Sheafor, and he said that I was going the fastest by far of any rider he had seen at the finish. Anyway, I ended up finishing crazy good. I don’t remember the place, but I’d guess it was somewhere between 8-15th. Way better than I could have ever expected. I couldn’t understand it. I rode so easy, but had a super result. The only downside to this whole thing was that I caught a ton of shit for Koechli about not saving myself for the team. I guess he was right.

Anyway, this was an example of how lack of pressure made me perform better. I think that is one of the main reasons that Cadel is having a super Tour de France this year. Actually, having a super year this season. Lack of external pressure. I think that he is performing better because he has realized that he can only do what he can do. I’ve known Cadel for a really long time and have watched him handle pressure fairly poorly sometimes. When he got into the pink jersey in the Giro, way back, I told the guys on the ride that there was no way that he would hold the jersey because he was going to crack. I’m sorry to say I was right. But after talking to him after the Tour last year, I realized that he is much more mature and in a much better situation for a good mindset. I don’t think that BMC is putting anywhere near the pressure on him to perform as other teams he’s ridden for. And it is working. He seems to be relaxed and focused.

The Tour de France has come down to 4 races now. 3 road races and a TT. The pressure is mounting for all the riders, but Cadel seems to be in the drivers seat at this moment. Those descending skills, from MTB racing or where ever, seemed to serve him well today. 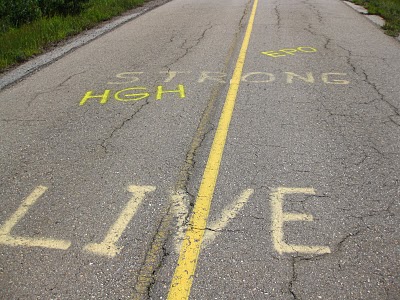 Not the same road graffiti as when I rode. I doubt Nike put this here. 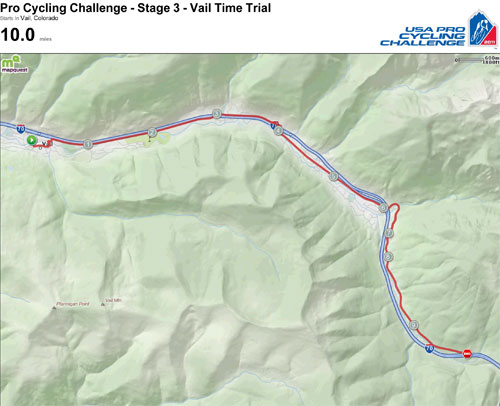