I’ve always been good at descending. I’m not sure why. Originally, is probably because I liked the idea of getting free time without having to expend much physical energy. The first time I came out to Colorado I remember how fun it was descending from the top of Wondervu to Pinecliff. I’ve always looked at descending as a super important skill to have if you wanted to be a successful road racer. The last few days riding in Summit County, I realized how much I missed going super fast downhill for miles at a time. It is wonderful.

The same in MTB racing. When I first started racing mountain bikes seriously, I was horrible at descending. I wasn’t slow, I was out of control. That’s makes for a lot of ground contact and blood. It took a long time, but eventually I learned how to descend quickly, in control and rest at the same time. That is the key. There is something nearly religious being able to snake down technical singletrack effortlessly. I finished 12th in the World Championships in Vail, the 3rd American, and the reason was that I was able to relax on the descents. That allowed me to be pretty fresh at the end of the race. It didn’t have anything to do with my ability to climb. Well, not much.

Watching the Tour yesterday, and over the last few years, I am amazed how bad many European road Pros descend. I’m not exactly sure what to attribute it to, but there is a huge discrepancy between the riders that descend quickly and slowly. I noticed it last year at the Giro on the Strata Bianca stage where Basso lost so much time to Cadel. Then again this year at the Tour of California with Laurens Ten Dam being so horrible. (I didn’t realize that Ten Dam had crashed today when I posted this.) Then yesterday, with Moncoutie going over the top of the last climb just a stones throw from Jeremy Roy and then losing so much time to him on the descent. Not implying that Thor didn’t deserve to win the stage, but if Moncoutie had been a better descender and hooked up with Roy, the results would have certainly been much different.

Riding in Europe is much different from riding in the US. Especially on the mountain roads. The roads are much narrower, more traffic and more dangerous in general. I understand that it sometimes seems stupid to lay it all out on a training ride, descending. But, that is the only chance that one is going to get to descend at speed other than racing. I hated it when we all switched over to clinchers from tubular training. Clincher tires don’t handle nearly as well and if you flat a clincher on a descent, it is way more dangerous. And now we race on carbon rims and train mainly on aluminum. There is a huge difference between those two surfaces braking, with carbon being very inconsistent.

If I was a team manager, I’d have my team go out and practice descending on their race setup. It is a skill set that requires practice to acquire. There is no downside to having that ability in your quiver. As Thor proved yesterday. 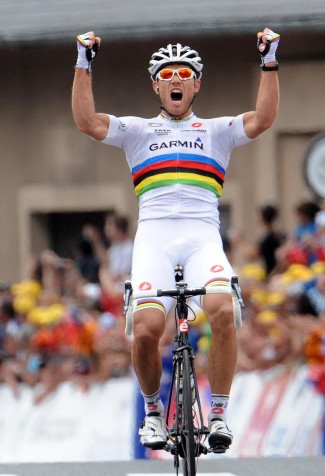 Thor was rewarded with this feeling because he has good descending skills.

Jens wasn’t having his best descending day at the Tour today either. His Quote- “Getting scared on a descent is my second name,” he said. “I never like descents so much, so I’m always trying to be more careful, but it’s part of the job.”